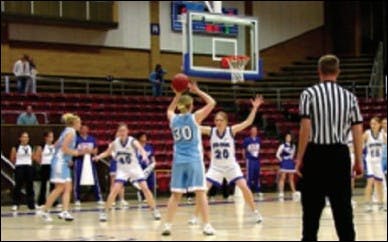 Garth Hall had grown disenchanted with what he perceived as skewed values within big time college athletics. That's why Hall, a Division I football coach for some 30 years, seized the opportunity six years ago to serve as athletic director at Ricks College, a two-year campus located in remote Rexburg, Idaho. But Hall couldn't have imagined how far from the mainstream his move would ultimately take him.

In 2000, the head of The Church of Jesus Christ of Latter-day Saints, which owned Ricks, announced that the college would be renamed Brigham Young University-Idaho, become a four-year campus and abandon intercollegiate athletics. "I was told the day before they made the announcement, so there was some initial shock," Hall says. "I loved what I was doing. After being in Division I, the thing I got infatuated with was the athletic opportunities we were providing for a certain type of student."

Uncertain of his own employment future, Hall accepted the chair of a committee charged with creating a new broad-based activities model for BYUI.

Lori Woodland, meanwhile, had just signed her latest recruiting class when news came that the women's basketball program she had coached into a National Junior College Athletic Association power since arriving in Rexburg in 1985 would cease to exist. She, too, found herself stunned, skeptical and sitting on the very committee that would, in essence, make official the demise of her world as she knew it. "We didn't even know what to talk about in our first meeting," she says. "So we established some guiding principles, some things that we wanted to accomplish with this program. The one that best defines our program is that we wanted our students to be participants rather than spectators. We wanted to get as many students involved as we possibly could."

The resulting model, described by its architects as "intracollegiate athletics," is at least radical, and potentially revolutionary. Teams no longer travel, nor do they compete against other schools. Instead, entire on-campus leagues are established and run primarily by students to accommodate a growing number of sports - from eight-on-eight football to fast-pitch softball. A men's swimming league launched this winter, and students have petitioned for the inclusion of women's lacrosse. Other than a chance to play, the athletes demand little. Ice hockey teams skate outdoors on a naturally frozen rink, and basketball teams typically play in front of 3,500 empty seats.

"We're trying to involve as many kids as we can in whatever they want to do," says current athletic director Trent Shippen, who grew up 20 minutes from Rexburg, and played and coached basketball at Ricks. "We had 1,046 athletes involved in our program from the fall of 2002 through the summer of 2003. Before then, it was about 280. Not one kid is on scholarship. The kids here are all doing it for the love of the game."

The actual games are only part of the new BYUI approach. Teams don school-supplied and laundered practice uniforms for multiple weekday workouts. Weekend games feature halftime entertainment by the marching band and cheerleading squad. A year-end banquet honors most valuable players and coaches of the year.

At first glance, it may appear every bit the small-college status quo. But a closer look reveals that students are doing the coaching, the officiating, the designing of logos and uniforms, the marketing and promoting, the running of stats, even the running of entire leagues. In addition to carrying 19 credits as a BYUI senior, JaNae Anderson pulls double duty as a volunteer assistant basketball coach for one of six women's teams and as the paid manager of the equipment room, responsible for hiring student help and handling scheduling and payroll.

According to Woodland, who now supervises Shippen as BYUI's physical activities director, it took 65,000 student-support hours to run the physical activities program last year, with the majority of students (56 percent) volunteering their time. All four activity categories within the new model - including physical, social, arts and enrichment - are now funded entirely with the former Ricks College athletics budget, with money to spare, says Shippen. (Athletes competing in football and ice hockey pay a $25 participation fee; all other sports require a $10 fee.) The surplus makes feasible plans to expand team rosters and leagues, as well as build soccer and softball fields, additional gymnasium space, and a refrigerated ice rink.

Hall, in his new role as vice president of advancement, reports that annual giving has remained consistent, despite lingering backlash among Rexburg residents. "The community is still disappointed," he says. "I think there was a great value placed on intercollegiate athletics. Obviously, our focus is no longer on spectating, so I think in some ways we've lost some of that community attachment and have yet to get it back. There have been some individuals who have pulled back on what they were giving, but there are others who have jumped on board as they hear the new message."

That kind of camaraderie can be found among BYUI's intracollegiate leagues, as well. "A lot of what has developed is a surprise to us - not just a cohesiveness within a team, but a cohesiveness within the whole league, because they all know each other. They're buddies," Woodland says. "They want to beat each other so badly out there on the floor or the field, but when the game's over, it's over."

"You're able to meet a lot more people," says Anderson, a former Ricks College varsity basketball player who competed in the BYUI women's basketball league last year. "Before, you'd go to other colleges, but you weren't ever going to see those people again. With the competitive league, you're able to see those people every day, interact with them, do things with them on the weekends. You become friends. It's a lot more fun."

Sportsmanship, another of the committee's talking points, is strongly emphasized. "We had four full-contact football teams here in the fall, and they were told, 'We're here to be good sports. If we see any of you knocking a quarterback silly and prancing over him, we're going to take the ball and go home.' We have the opportunity to do that here," Woodland says. "We want these students to leave here knowing how to be a good sport, so when they're out coaching Little League Baseball or youth soccer, they're not screaming at kids, and as parents they're not belittling their children. They understand how to be a good parent or how to be a good coach, and teach proper values."

It's those values that kept Hall rooted in Rexburg. "This was kind of refreshing, and it happened so fast," he says. (As athletic director, Hall lobbied successfully to keep intercollegiate athletics in place for two years in order to accommodate student-athletes returning from missions and to honor all existing scholarship commitments.) "Before I knew it, I was captivated by this approach to activities, so I never really did get to the point of saying, 'I'm out of here.' "

BYUI doesn't offer a degree in sports management, but direct tie-ins to academics are possible. "We're just starting to scratch the surface," Hall says. "In our business area, for instance, they're trying to develop a skill set for aspiring graduates. One of those skills is leadership, so they're toying with the idea that once a kid has coached one of our athletic teams, that experience would count as one of their departmental requirements. It had always been intended that athletics would be connected to the academic purpose - not philosophically, but in some real ways."

"The most important thing is that this program is not about the ballgame," says Woodland. "It's about providing leadership opportunities of the broadest and most exciting kind. The vision is for it to be an extension of a student's academic experience. They learn in the classroom and then they experience what they learn in activities. When you think about it, wouldn't this be a wonderful direction for a lot of schools to go in?"