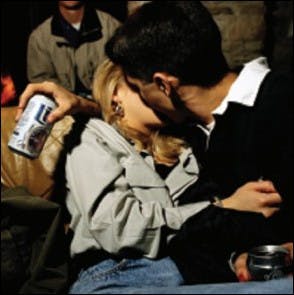 Lydon Murtha was staying home. The highly regarded 6-foot 8-inch, 315-pound offensive lineman had given every indication that he would play football this fall at the University of Minnesota, located just 60 miles to the east of his native Hutchinson. In fact, he had verbally committed to the Gophers, who with Murtha in the mix found their incoming freshman class ranked among the top 25 in the country.

When Murtha suddenly changed his mind only weeks before National Signing Day in February, U of M head football coach Glen Mason found himself publicly defending his program's recruiting practices. A potential scandal was surfacing, buoyed by this front-page headline in the Jan. 28 St. Paul Pioneer Press: "Strip-Club Trip Costs U a Recruit."

The accompanying article revealed that current Gopher players had escorted Murtha to an alcohol-free Minneapolis strip club during his official campus visit in late December. The article went on to quote a "shocked" Murtha as saying, "I'm not into that kind of stuff." Then Murtha waffled, telling the Minneapolis Star Tribune that the U of M strip-club visit in no way factored into his decision to sign Feb. 5 to play at the University of Nebraska.

Regardless of Murtha's motives, the loss of a prospect ranked in the top 100 nationally by both Rivals.com (42nd) and TheInsiders.com (90th) dropped Minnesota from among the National Signing Day elites and forced Mason to face such media questions as "What policies are set down for kids who host recruits?" No written manual exists, Mason told reporters at a hastily called Jan. 29 press conference, only his verbal admonition to players to "do the right thing."

Visual sex appeal and promises of actual sex have long existed on the shady side of a process already known to prompt wide-ranging improprieties. But the apparent use of sex as a recruiting tactic has never gained more attention than in recent months.

Less than a week before Murtha spurned Minnesota, the University of Colorado was confronted with a third federal lawsuit alleging rape to stem from one Boulder house party held in December 2001, a gathering allegedly set up to facilitate sexual encounters for visiting football recruits. According to one recruit's police deposition, CU football players showed the visitors a sexually explicit videotape, while promising them, "This is what you get when you come to Colorado."

Even amid mounting evidence linking CU football to strip-club visits and calls to escort services, athletics officials have denied that sex plays any part in the program's recruiting arsenal. "Fire me, fire everybody, if we've done any of this stuff," Gary Barnett, the Buffaloes' head coach, told listeners of Denver's KKFN-AM on Feb. 3. "We do not break rules at the University of Colorado - anytime, anywhere, under any circumstances." But four days later, former CU senior associate athletic director Robert Chichester was quoted as having stated in a deposition that Barnett believed that "if recruits aren't being shown these types of activities … it would be a recruiting disadvantage."

So is everybody doing it? The Associated Press reported Feb. 11 that Hardbodies Entertainment Inc., a stripper agency with offices in Denver, Houston and Las Vegas, has dispatched women to recruiting parties at Colorado and half a dozen other schools. In the words of Hardbodies president Steve Lower, "It's tradition."

"Parties are the big factor, and what those parties devolve into is the big unknown," says recruiting expert Bobby Burton, publisher of Rivals.com. "Sex goes on on campus. To think anything different is naïve. I don't think that colleges purposefully set up situations like that. If they do, I think it's few and far between, because they will get caught. Obviously, the risk isn't worth the reward."

NCAA rules pertaining to the appropriate entertainment of visiting recruits are vague by design, according to NCAA spokesperson Kay Hawes. "You can't legislate everything, so there has to be some judgment involved," she says. Division I bylaw 13.5.1 states that a prospect may be entertained only on a scale comparable to that of normal student life. Bylaw 13.5.2 addresses excessive entertainment, including, for example, helicopter and limousine rides or exclusive live music performances.

Entertainment of a sexual nature is not specifically mentioned, but NCAA infractions logs are not void of case precedent in this area, according to Hawes. Excessive entertainment has been determined to include purchasing the services of a prostitute for a prospect and spending large sums of money on strip-club lap dances for a prospect. "You could argue that visiting a gentleman's club may not be appropriate or within an institution's policy, but that visiting a gentleman's club might be something that a normal student does," Hawes says. "But you could also argue that visiting a strip club and spending hundreds of dollars on entertainment within the club might not be something that your typical student could afford."

Spurred in part by a Miami Herald series published earlier this year in which football recruit Willie Williams admitted to being flown solo on a private jet to Florida State and feasting on multiple steaks and lobster tails in one restaurant sitting, a nine member NCAA recruiting subcommittee is currently reviewing the association's entertainment bylaw language, Hawes says. When asked if sexual contact might be addressed, Hawes adds, "That and probably a variety of other things."

The NCAA is far from alone in its concern. Athletic directors within the Big 12 Conference, of which Colorado is a member, will discuss recruiting practices during an ethics summit in May, according to Big 12 assistant commissioner Bo Carter.

For its part, Colorado has been quick to act. On March 4, nearly two months ahead of the April 30 deadline set for a seven member panel investigating whether sex plays any role in recruiting on its campus, the university unveiled sweeping recruiting policy changes.

• Visits will be shortened from two-night stays to one night, and the curfew of 1 a.m. will be changed to 11 p.m. • Recruits will be supervised during their stays by their parents or a designated coach. • Visits will no longer involve player hosts. • All activities involving visiting recruits will be planned, approved and supervised by a designated coach. • Recruits will not be permitted to use alcohol or drugs, attend private parties, or enter bars or strip clubs during their stay.

Recruits violating these policies will not be admitted to Colorado, and violations committed by current staff or players will not go unpunished, the new policy warns.

Without question, the media storm engulfing the Colorado case has put other schools on alert. The Des Moines Register reported March 8 that the University of Iowa would appoint an independent investigator to determine whether a former football recruit's sex with a female student during his visit to Iowa City constituted "special treatment," as the player described in a newspaper published in his home state of Kansas. Despite the football program's denial of wrongdoing and the player's rejection - not unlike Murtha's - of his original portrayal in the press, the investigation was on, as of this writing.

Meanwhile, Minnesota's own internal investigation into recruiting visits in the wake of the Murtha defection may bring little long-term impact to that campus. "I don't expect great changes here," says athletic director Joel Maturi, citing existing policies that outline how recruiting hosts are to behave (no illegal or unsafe activity) and spend money (the NCAA allows $30 a day). "We don't believe we can produce a list of do's and don'ts, because we don't believe we can cover everything. In this case, a poor decision was made, and we certainly will address it. But I don't believe that what happened in this case was due to inappropriate policies."

A mid the recent tawdry headlines, signs of recruiting sensitivity exist. Recruiting hostess programs, which provide visiting prospects with a female student's perspective on campus life, have undergone major overhauls in recent years. Dress codes have become more conservative. Miami's Hurricane Honeys were renamed the Cane Connection. Clemson's Bengal Babes became the Tiger PAWS. It's now the Georgia Girls & Guys, with the addition last fall of five male hosts to that school's roster of 90 women. "There's nothing that we did that guys could not do," says Connie Connelly, UGA's host program director.

That is not to say that there aren't written do's and don'ts for her program participants. "They are to conduct themselves in a manner beyond reproach at all times," Connelly says, adding that hosts and hostesses are not allowed to date recruits, nor are they allowed above the lobby level of a recruit's hotel. On one recent football game day, adds Connelly, a recruit who made what university officials deemed inappropriate advances toward a Georgia Girl spent the rest of his visit without escort and was not invited back.

We'll never know how many recruits take the moral high road during campus visits - or how many, if any, are indeed sold on a school based on its promise of sex or sex-charged nightlife. Nonetheless, recent events dictate that coaches and other recruiting officials at least consider the potential powder keg these supposed turn-ons represent.

"College coaches are very well aware that anything can turn a recruit off," Burton says. "It could be tough academics. It could be a gentleman's club. Each recruit is unique."