Among America's oldest sports, lacrosse could be the newest thing in high school athletics 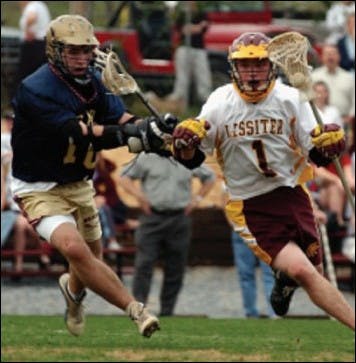 You can count on your fingers the number of high school lacrosse teams in South Carolina. But thanks to increased interest from student-athletes, financial donations from area businesses and a superintendent of schools responsible for starting the state's first boys' and girls' lacrosse programs at Hilton Head High School, at least seven Greenville County high schools are expected to begin playing the sport within the next year or two.

While only 15 states officially sanction lacrosse (two more, Florida and Michigan, plan to start official interscholastic programs during the 2004-05 school year), South Carolina is among an increasing number of states in which the sport is gaining ground among high school students.

In fact, more than 50,000 high school boys from 21 states played interscholastic or club lacrosse during the 2002-03 school year, according to the National Federation of State High School Associations, while almost 40,000 high school girls from 24 states participated in the sport. And those numbers are on the low side, according to the estimates of U.S. Lacrosse, the Baltimore-based governing body of men's and women's lacrosse that has played a key role in initiating high school programs throughout the country.

"It's an emerging sport," says Jerry Diehl, an assistant director with the NFHS and editor of the boys' high school lacrosse rulebook. And because it can be played on an existing soccer or football field, requires little equipment (especially for girls, who don't wear padding) and appeals to students who previously didn't play sports, lacrosse is an activity that can easily and inexpensively be added to a school's roster of athletic programs.

Jay Watts, coach of the girls' lacrosse team at Westminster Schools, a private K-12 facility in Atlanta, estimates that in Georgia, lacrosse costs a high school between $3,300 and $3,700 per season for field equipment, game officials and 25 uniforms. Out-of-pocket expenses for girls are usually only about $80 for sticks and mandatory eye protection, while boys pay about $230 for sticks, a helmet, shoulder and elbow pads, and gloves.

The Georgia High School Association began sanctioning boys' and girls' lacrosse in 2002, but does not yet recognize it as a tournament sport. Only 26 schools (most of them in the metro Atlanta area) actually fielded boys' and girls' teams this spring, but more are ready to begin competition soon. "Off the top of my head, I know of a dozen schools that could have a girls' lacrosse program next year," says Watts, who planned to ask the GHSA in late March to consider making lacrosse a tournament sport. "Girls' lacrosse has already outgrown two sports that have tournament designation on the girls' side: gymnastics and slow-pitch softball," he says.

"I can definitely see the majority of states sanctioning high school lacrosse within the next 10 years," says Brian Logue, director of communications for U.S. Lacrosse. He credits both Major League Lacrosse and the indoor National Lacrosse League, as well as other high-profile exposure of the sport, for spurring a surge in interest among younger players. "Three years ago, the only lacrosse on TV during the course of the year was the NCAA Division I college championship final on ESPN and the semifinals on ESPN2. Now College Sports Television is airing a national game of the week live. Lacrosse is seen as the new thing to do because it's a little different. Kids can find a niche in lacrosse because there are still not a lot of kids who play it. It's almost a new kind of extreme sport that in reality is very old."

Indeed, lacrosse - which combines elements of hockey, soccer and basketball by emphasizing speed and agility - is considered by some observers to be America's oldest sport. It is played with a stick (the "crosse"), which is used by players to throw, catch and scoop the ball while navigating a crowded field en route to the goal. Rooted in American Indian religious traditions, lacrosse first came to college sports (at New York University) in 1877, with high school teams following five years later. The first American women's lacrosse team was formed in 1926 at the Bryn Mawr School in Baltimore.

Today, more than 900,000 people in the United States have tried lacrosse at least once, according to SGMA International, while more than 300,000 regularly play the sport, U.S. Lacrosse says. Kids start young in park and recreation programs, and then move on to leagues in high schools and colleges.

Because high school lacrosse is typically played in the spring, the crossover potential for student-athletes in such fall sports as soccer and football is tremendous. (Pro Football Hall of Famers Jim Thorpe and Jim Brown were accomplished lacrosse players in the early 1900s and 1950s, respectively.) Surveys in various states have suggested that students who don't play a spring sport would play lacrosse if it were offered.

Those kinds of surveys are what convinced officials at the Michigan High School Athletic Association to add boys' and girls' programs to its spring season next year. Well, that and several calls and letters from coaches around the state requesting that the MHSAA sanction lacrosse. Michigan's first high school lacrosse championship will be held next spring.

While surveys in Michigan indicated twice as much interest in high school lacrosse among boys than girls, an attempt to sanction boys' lacrosse in Minnesota failed by two votes last November. Rich Matter, director of finance for the Minnesota State High School League and the staff person who oversees girls' lacrosse, predicts that the issue will be brought up again, as more schools petition the league.

Meanwhile, a dozen high schools, most of them located within the seven-county Minneapolis/St. Paul area, fielded girls' teams this spring. Girls' lacrosse has been recognized in Minnesota since 2002, but the number of participating teams falls far short of the 32 teams needed for the league to sponsor a lacrosse state tournament. That hasn't stopped the 12-team conference from running its own tournament, but it's just not the same. "I look forward to the day when we can sponsor a state tournament in lacrosse," Matter says. "Once that happens, the sport will go to the next level."

Although the majority of high school lacrosse programs are still rooted on the East Coast, the sport has become sanctioned in states as far west as Colorado and California (where observers say the California Interscholastic Federation is feeling pressure to adopt a state tournament).

But not all states seem prepared to embrace lacrosse. In Rhode Island earlier this year, for example, Middletown Public Schools officials turned down a request by local lacrosse backers to field a high school team and join an independent nine-team high school lacrosse league - even though players, parents and other supporters would foot the entire bill. Opponents cited fears that lacrosse would take athletes from other established sports, a notion that Logue and others dispute.

Other schools have halted new programs of any kind in the wake of severe budget cuts. But schools sponsoring lacrosse are not without their own woes. Finding coaches and referees in communities where lacrosse traditionally has not been played can be challenging. That's why U.S. Lacrosse, through its 50 chapters in 33 states, is working with local officials to sponsor training and recruiting sessions. Logue notes that basketball referees are able to make the transition from the court to the field easier than officials from other sports. Says Roberts, "We're going to have to encourage crossover, like we do with umpires in baseball and softball."

And controversy within the sport looms, with groups like U.S. Lacrosse opposing the newly formed National Development Program, a recruiting program for elite high school lacrosse players involving competition pitting against each other approximately 500 players on teams divided into four regions of the country. A total of 64 teams will vie for a national championship beginning in August.

NDP officials say the program will expand the opportunities available to high school lacrosse players. Opponents claim the NDP encourages specialization by prohibiting student-athletes from participating in fall sports and loosely models Olympic development programs in other sports, which U.S. Lacrosse says "conflicts with the spirit of overall sports participation at the high school level."

Regardless of whether the NDP takes off, the fact that such a program is even available proves that lacrosse has arrived - even though it never really left. "This has the potential to be a marquee sport," Logue says.