Although models exist, pricing policies are unique to each rec department 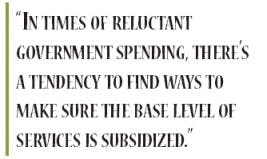 The patrons of Keller Golf Course just don't get it. How can only a portion of their $31 greens fees go to the upkeep of their favorite public course, and the rest be used to fund other Ramsey County (Minn.) Parks and Recreation facilities and programs? "When I pay for something and part of it goes to something else, I call that a tax," local resident Frank Schneider told the Minneapolis Star Tribune in April. "I have no problem with some profits paying for parks. But some of that money should go into golf courses. That's what I'm paying for."

It's true that the $700,000 in excess revenues from Keller Golf Course, five other county-operated golf courses and facilities, and eight ice arenas are increasingly being used to subsidize various operations of Ramsey County Parks and Recreation as the department's budget share of county revenues has been gradually reduced. Fifteen years ago, nearly half of the county parks budget came from property taxes. Today, tax revenue covers only about 25 percent of the $7 million budget.

"In times of reluctant government spending, there's a tendency to find ways to make sure the base level of services is subsidized," says recreation director Greg Mack, who considers Ramsey County's plentiful parks and vast network of trails to be the most fundamental of community recreation amenities. He explains that without the influx of "new money" to cover the cost of operating such facilities - all of which can be accessed at no cost - Ramsey County officials have been forced to rely on funds from their so-called cash-cow operations.

That said, Mack can appreciate the frustration of Schneider and other golfers, who see no reason why the money they spend at Keller Golf Course isn't reinvested there. This year, only about $60,000 of the $500,000 in requested golf course capital improvements are being funded - a shortfall that, at least for now, leaves the majority of those projects on the back burner. "It would be nice if people could say, 'OK, for every dollar of my greens fees, 75 cents goes to the golf course and 25 cents goes to general capital improvements,' " he says. "But the way the system is now, it's more like, 'So, 50 cents goes to the golf course and the other 50 cents goes where? To maintain some beach. Why?' It becomes real confusing for the consumer."

The situation in Ramsey County is just one example of the challenge facing parks and recreation officials. It's hard enough to establish a pricing structure that provides for sufficient cost recovery of department operations. It can be even more difficult, though, to clearly convey to the public the reasons for that pricing strategy.

Because each agency's needs and goals are unique, there is no such thing as a standard pricing policy. What has been effective for some rec departments, however, is a basic, pyramidal pricing methodology that provides necessary structure but is also versatile enough to accommodate the individual objectives of each agency's mission. "Otherwise, what are you supposed to do? Call every parks and rec department and ask what it charges. That's ludicrous," says Teresa Grills Penbrooke, who worked in public recreation for six years before becoming CEO and founding managing member of Greenplay LLC, a Broomfield, Colo.-based recreation management consultancy. "The market is one resource, but as far as setting up a system, this model works very well."

Developed during the 1990s by professors of recreation and leisure, parks and recreation professionals and recreation management consultants, the pyramid pricing strategy divides a recreation department's facilities, programs and services among five separate levels. Each level represents a different degree of community benefit, or the potential to positively affect the most residents. Programs at the bottom level of the pyramid have the greatest community benefit. Programs on the top level have the least potential to affect everyone in the community, and are instead referred to as offering a highly individualized benefit.

Before a rec department divides its programs among the pyramid's five levels, it needs to set an overall goal of cost recovery. If a department hopes to recover 60 percent of its costs, then it might decide that half of its programs should recover 90 percent of their costs. The other half would be expected to recover 30 percent.

How that department decides which programs are expected to recover 90 percent and which are expected to recover 30 percent depends on the programs' placement on the pyramid. The higher a program is on the pyramid - or rather, the more individualized the benefit offered - the higher the expectation to recover its costs. Moving toward the other end of the scale, the lower levels of a rec department's pyramid pricing structure would consist of offerings that have the broadest community benefit, and thus, aren't expected to recover their full costs. "You are the guardians of public tax dollars. You can justify using tax dollars for the community's benefit. For example, everyone can use a pool," says Penbrooke.

The parks and recreation commission in Ramsey County considers its parks and trails to be a community benefit to all residents and therefore doesn't expect to receive any cost recovery from these facilities. "Our board feels pretty strongly about maintaining free access to trails and parks," says Mack.

Because not all residents can enjoy or directly benefit from programs that provide a highly individualized benefit, such as elite youth sports leagues or personal training services, there is much less justification for subsidy from public tax dollars. In fact, higher-level services may even be depended upon to generate excess revenue to maintain balance throughout the pyramid. According to the pyramid pricing strategy, user fees would make up the lion's share of funding for programs at the fourth level, while programs at the fifth level would depend entirely on fees. "If you expect 100 percent cost recovery from these programs, then why are they being subsidized with tax dollars." asks Penbrooke.

But because higher-level services and programs are wholly dependent on user fees, there's also more pressure on rec departments to price them competitively. Mack says that there's a fine line between getting market value and price gouging. "To cover direct and indirect costs, $20 greens fees may do it. But we'll look at market prices. If the average in the area is $25, then we'll charge $25," he says. "But we would not go to the other side of the equation and charge $50 just because we know we could get it."

Pricing at the pyramid's second and third levels, where programs and services provide both community and individual benefits, can also be somewhat difficult. "Yes, having a body of water in the community is a need," says Penbrooke. "But then you start asking whether you want your pool to offer competitive or leisure swimming, or both." While most residents can take advantage of leisure swimming opportunities, only a select few would use a pool for competitive swimming - namely, those participating on high school swim teams or privately run club teams.

In such cases, Penbrooke recommends dividing aquatics programs among several levels of the pyramid. "There are always gray areas, but you try to make it as clear as possible so that everyone understands," she says. Swim teams, for example, would classify as top-level aquatics programs and may be designed to recover their costs plus 60 percent revenue. Aquatics programs at level three of the pyramid (for example, youth learn-to-swim classes) would be expected to recover costs plus 25 percent. "Make it a public process. Let people know why they're paying more for this program than that one," says Penbrooke. "That way you can say, 'This program is here and this is what we need to get back from it.' "

No matter what model it follows, the success of any rec department's pricing strategy relies heavily on the department's ability to clearly communicate to the public its basis for adopting that strategy. It's also important to get the entire staff involved in the decision-making process when assigning cost recovery and subsidy expectations (although Penbrooke, not surprisingly, recommends bringing in an "objective third party" to help facilitate the process). "Hire a consultant, or simply bring somebody in from HR or any other city department," she says. "This can be a very passionate process. Everybody is going to think that his or her program is the reason for the department's success. With a third-party facilitator, the department director is on the same side of the table as the rest of the staff. No one can say, 'Athletics is getting cut because the director doesn't like Bob.' "

It's also not a bad idea to get members of the community involved. As it prepares to tackle the task of revamping its pricing policy, the Ramsey County Parks and Recreation Department will likely turn to local citizen advisory groups, such as the one that offers suggestions on the operation of Keller Golf Course. According to Mack, the course's advisory group wants the Ramsey County rec department to give greater priority to spending money to maintain ordinary (but necessary) course features that golfers expect to be in good condition. "Bunkers, for example, are not the most exciting things, and not where you want to be," says Mack. "But when you're there, you'd rather not break your clubs trying to get out."

Mack won't go so far as to say that the bunkers at Keller Golf Course are filled with rocks, or that the 75-year-old course is in such disrepair that it would be better off closed. "But we've probably seen our best years. If you look at the number of rounds played over the past couple of years, we may have had our best season in '99," he says. "So quality is huge for us to remain competitive. If we don't keep our quality up, the cash flow will diminish."