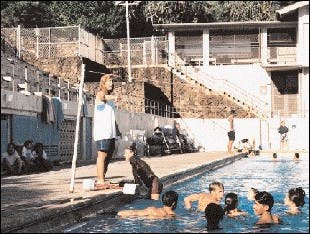 Six years of planning came to fruition Sept. 1, when all 40 public high schools in Hawaii hired a full-time certified athletic trainer (ATC). The state legislature, which began funding a pilot program in 10 schools in 1993 and added five more ATC positions in 1994, has provided $678,000 in 1997-98 and $813,600 in 1998-99 to add what they're calling "athletic health care specialists" to the 25 high schools that had lacked ATCs.

Hawaii thus becomes the first state to mandate and fund athletic trainers in all of its public schools, but if Bart Buxton has his way, it won't be the last. Buxton, a professor of sports medicine at the University of Hawaii (then) and at Georgia Southern University (now), has done presentations in 35 states, preaching the benefits of the Hawaii model and explaining to all why Hawaii's experience can - and should - be replicated.

Dwight Toyama, who now serves as executive director of the Hawaii High School Athletic Association, was the athletic director at Kaimuki High School in 1991 when Buxton began organizing the Hawaii effort. Toyama, who later chaired the Oahu Interscholastic Association task force that helped draw up the pilot program bill, calls Buxton "a pioneer," and is somewhat dismissive of his own group's efforts. "We were just the soldiers," he says. But Buxton says the project's success hinged totally on the work of the athletic directors, principals and coaches who did the bulk of the lobbying and testifying before the legislature.

"If you look at any state that has attempted to do what we did in Hawaii and failed, you will always find the same thing - athletic trainers led the effort," says Buxton, who is himself an ATC. "Trainers' associations can't come in and do this, because it looks grossly self-serving. You can't go out and mandate jobs for yourself."

What Buxton brought to the mix, though, was invaluable. He coached the coaches and ADs on their testimony, keeping the message simple and direct. By some accounts, Hawaii ADs had sought such a program for 32 years, but had never framed the need for trainers specifically as a health and safety issue.

"What we said was: There are foreseeable risks involved with kids participating in these organized sports programs that are basically sanctioned by the state; therefore, the state is accountable," says Buxton. "Second, we're talking about employing somebody who can put a risk management program into an entire school, not just treat athletes. We really adopted the concept that ATCs were allied health professionals."

The pilot program put the latter concept to immediate use. ATCs in the first 10 schools worked with all students, from those hurt skateboarding after school to those in the marching band. Clinics were set up and outreach performed for students at schools that didn't have ATCs yet. ATCs attending games treated both teams, whether they were a pilot school or not. These were all effective ways to get administrators and coaches at schools without trainers interested in lobbying for the program.

Buxton's other primary role was as a gatherer of supporting data that would make legislators see the risks of inertia. There was plenty of anecdotal evidence around - indeed, a 1989 spinal injury to a local high school football player that resulted in a settlement of just under $1 million made for powerful testimony - but the needs assessment study performed by Buxton, physical therapist Michael McCarthy and University of Hawaii professors Eric Okasaki and Kwok Ho proved crucial.

In particular, the results of the group's year-long injury surveillance study of Hawaii high schools was a devastating portrait of an accident waiting to happen.

The data, collected by all Hawaii public high school coaches, showed that coaches were treating injuries with ice (46 percent), tape (33 percent), basic first aid (12 percent) or heat (1 percent), and 8 percent of injuries were receiving no treatment at all. Even in the case of major injuries (defined as those keeping athletes out of contests for more than 21 days), 5 percent were receiving no treatment, 6 percent were being taped and 69 percent iced. Trips to clinics to verify information with injured athletes and their physicians found situations such as this one: a football player with a ruptured ACL and two torn menisci, who was given surgical tape and told he could go back in the game.

"Basically, the data showed that coaches did not have the training, which we knew, but we had to prove it," Buxton says. "Here were kids suffering major injuries, and they were getting improper treatment - or were getting none."

Then, during the pilot period, two catastrophic injuries occurred. In the first case, a football player complaining of neck pain was removed from a game by an attending ATC and was found the next day to have suffered bilateral fractures of the C-5 vertebra. In the second, a soccer player from a school outside the pilot project, who had complained of chest pains to his coach, collapsed on a long-distance run and died of an aortic aneurysm. Both were included in testimony when hearings were held regarding expansion of the program to all public schools.

"We had a lawyer come in and testify," says Buxton, "and basically what he said was, 'If you don't fund this, we'll sue you. From what I've heard here, all of you state legislators know there's a problem now. It's clearly documented that kids are dying.' "

The legislature funded salaries for ATCs, but not facilities for them to work in; Buxton likens it to "hiring a chef and having no kitchen." But Toyama reports administrators have been creative in converting classrooms and equipment rooms to training rooms, although almost everyone is still without air conditioning (a controlled environment is necessary in cases of heat exhaustion).

Funding remains an obstacle to implementation elsewhere. Hawaii passed the trainers' bill in spite of a gubernatorial-mandated zero-growth budget, but legislatures in larger states appear to be digging in their heels. (Most of the progress nationally has been in smaller states such as Delaware, New Jersey and those in New England.) Buxton, however, believes testimony introduced in the Hawaii case provides a needed wake-up call to lawmakers. His study of Hawaii found that the state's 23 private schools provided a higher level of care than the public schools; in his recent study of Georgia, Buxton has found that the larger the school classification, the better the quality of care. "Probably the most important thing we found in Hawaii was that public school kids' civil rights were being violated, and we could make a similar argument in Georgia with respect to students at small schools," he says. "The state ultimately has to take care of every kid.

"They say there's no money," Buxton adds. "Well, we did it with no money in Hawaii. And I'll tell you - kids start dying, and it's amazing how fast legislators come up with money."