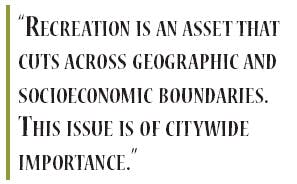 In July, Edmonton, Alberta, officials announced a bold yet expensive recreation agenda. Over the next decade and at a cost of up to $180 million (Canadian), they plan to build five large recreation facilities, each serving anywhere from 40,000 to 80,000 residents.

On the short list to receive these mega-centers - envisioned to be community hubs with meeting rooms, gymnasiums, pools, fitness centers, ice arenas and indoor soccer fields - are two divergent communities: a decaying, urban section on the northcentral side of Edmonton and a booming, affluent suburb to the southwest called Terwillegar-Riverbend.

But two significant roadblocks could jeopardize the immediate realization of this ambitious plan: one, the city is in the midst of a severe budget crisis, and two, a long list of repairs to Edmonton's existing arenas, pools and other recreation facilities must be addressed first. These factors have led some members of the local media to speculate that only one district of the two will have its project greenlighted for municipal funding within the next few years.

But according to Pieter de Vos, a lead organizer for the Community Action Project, a grassroots organization devoted to developing leaders in the north-central Edmonton community, that's a wrong assumption. Though it may be easier for some observers to relate the issue in terms of haves vs. have-nots by "pitting one community against another," he says, "recreation is an asset that cuts across geographic and socioeconomic boundaries. This issue is of citywide importance."

Another north-central community leader, Warren Champion, president of the Central McDougall Community League, agrees, but wonders if city officials are truly committed to supporting the inner city. He says that this isn't the first time they have made grandiose capital-improvement plans for the north-central community.

"The need for a good inner-city recreation facility has been identified for at least 10 or 12 years, but it hasn't appeared. There have been a ton of empty promises," says Champion. "In an ideal world, where there are ample resources for all players, I don't think there would be a problem. But the allocation of those resources is not always equitable. And at the end of the day, Edmonton is in a difficult position because it can't even maintain the facilities and parks it currently has. It's fine for any city department to say that inequity doesn't happen, but there are a number of people who have become cynical about the whole process."

Roger Jevne, director of partner and facility development for the Edmonton Department of Community Services, says that north-central residents have no reason to suspect favoritism is at work. "We're trying to find a way to get them both done," he says of the proposed facilities for the north-central and Terwillegar-Riverbend districts. "This fall, there will be more public meetings, and early in 2005, we'll have conceptual drawings. We're hoping to start construction in '06. Informally and formally, we've had discussions with potential capital partners. We're optimistic."

De Vos shares that optimism. At the same time, he understands the skepticism of his fellow downtowner, Champion - although he doesn't see its usefulness. "We can either take a defeatist position right off the bat or try to focus on our opportunities," says de Vos, acknowledging that despite prevailing opinions to the contrary, "sometimes you have to commit to a vision and put the cart before the horse. It's amazing what people can get done when they commit to a vision."

That vision was laid out by the Edmonton Department of Community Services in its Recreation Facility Master Plan, a comprehensive 130-page manifesto outlining the department's expansion goals over the next decade. The document proposes a variety of creative fund-raising strategies, among them partnerships with private organizations to either help finance or operate the nine public recreation facilities slated for renovation or construction by 2015. The document also invites groups like the Central McDougall Community League, the Community Action Project and the Terwillegar-Riverbend Advisory Council (TRAC), a grassroots organization created by southwest-side residents several years ago with the intent of expanding that community's recreation opportunities, to involve themselves in the facility planning and development stages.

TRAC gladly accepted the city's invitation. Already, the group has identified a 30-acre building site within a 70-acre park. Fund-raising has also begun, as have efforts to partner with organizations from the private sector. "I get tired of people complaining, always saying something's wrong but never doing anything about it," says TRAC chairman Rob Agostinis. "I used to be the one who was complaining. Now, I'm doing something about it."

Agostinis is tapping all available channels to put together an event he calls "Catch the Spirit." Tentatively scheduled for next spring, Catch the Spirit is envisioned by Agostinis as a street festival, intended to motivate all Edmontonians to support the city government's Recreation Facility Master Plan and to get involved with the implementation of that plan in their individual communities. If all goes according to Agostinis' plan, the event will feature live music, dancers and be videotaped from the sky by a helicopter crew and broadcast live on local TV channels. "It'll be something along the lines of that famous Dr Pepper commercial: 'Who's a Pepper? I'm a Pepper,' " says Agostinis. "It's just to get people in the mood, to tell the city council that they want to be able to live in their own community and recreate."

Jevne says that he and his peers already are getting the message, loud and clear. "The folks in the south are anxious to get something built, and have said they'll help raise money," he says. "We're just now starting to establish those kinds of relationships with the folks in northcentral."

Champion looks forward to continuing the dialogue he's already begun with Edmonton city officials about revising their Recreation Facility Master Plan to allow for what he calls "more creative options." He asserts that "95 percent" of the discussion thus far has focused on full-scale recreation facilities. "It's great to talk about these $50 million facilities. But a large facility is more a dream than a financial reality," he says. "There has been much less emphasis on smaller facilities, maybe less than there should be."

That's why the Central McDougall Community League has suggested the Edmonton City Council consider investing in multiple community centers, each projected to cost approximately $500,000. According to Champion, they would be "less glamorous and very low-tech, but extremely affordable." Each facility, as proposed, would be designed to accommodate one type of activity, such as ice sports. "We're proposing that these facilities be run and maintained by the community," says Champion. "One quarter of the building cost would be raised by the community, one quarter by the city and half from the province, through a community facility enhancement grant. Then, the city could get 20 of these facilities for just $2.5 million."

Meanwhile, TRAC has its sights set on a large-scale recreation center. "We haven't built a new facility in Terwillegar-Riverbend in 24 years. We have a lot of vandalism, but that's because kids have nothing to do. The nearest Y is five miles away. I want someplace my daughter can walk to," says Agostinis. "We support the city quite a bit. We pay our fair share of taxes. We deserve something back. We're prepared to help pay our own way. We just want the city to give us the go-ahead. We don't want to wait 40 or 50 years."

Community leaders from both districts give the city credit for demonstrating good faith by shelling out $75,000 to hire an independent consultant to assess the precise recreation facility needs of both the north-central district and Terwillegar-Riverbend. It's likely that when the results are released in January, they will confirm initial projections that both communities suffer from a dearth of recreation facilities, although their specific needs are quite different. "Terwillegar-Riverbend is a rapidly growing area. I can understand their frustration with a lack of facilities in that area. I'm not going to be the one to say that they don't have a need," says Champion. "It just so happens that there's also a need here for new facilities, as well as for the upkeep of existing facilities."

Meanwhile, TRAC is going house to house to conduct its own informal needs assessment survey in the Terwillegar-Riverbend community. "We're telling people, 'You have to decide what you want, not the city,' " says Agostinis. He applauds the first steps taken by Edmonton city officials, but now he expects them to follow through. "They actually did a very good plan and I commend them. I'm not a recreation person, but I can tell that they really thought it out," he adds. "Now, don't just throw it on the back burner."