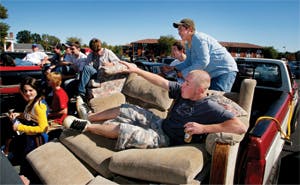 Steve Dirnbeck calls them "my blue guys" - a half-dozen students at O'Fallon (Ill.) High School who cover themselves in Panther-blue body paint and work the sidelines of home football games as wacky sidekicks to the school's official cheerleaders. While they certainly spur school pride in the stands, their efforts now begin in the parking lot with a tailgate party that includes the painting ritual, says Dirnbeck, O'Fallon's principal, who three years ago began encouraging students' attempts to tailgate on school property before Friday-night football. "My initial fear was that the kids were going to sneak in beer, but it has evolved into another way for them to have a good time and see that they can get ready for a game without alcohol," he says. "I also wanted to get more kids going to games and making high school activities a part of their weekend."

Even though usually no more than 50 students set up grills prior to any given home game at the suburban St. Louis school, Dirnbeck says his blue guys and others who have followed their tailgating lead have fueled a school spirit revival. Mark Roherty, principal of Homestead High School in Mequon, Wis., has noticed the same thing. "Tailgating provides a sense of community, even if it's something as simple as kids planning a party together and using an event at school as the reason to do that," he says. "That can be very positive."

High schools in Florida, Ohio and Texas also are leading the way in prep-level tailgating - and not just prior to kickoff but also before baseball games and wrestling matches, too. "It's not happening in all areas of the country, but it is catching on," says John Largent, a self-described "professional tailgater" and president and founder of the San Antonio-based American Tailgaters Association. "Unfortunately, tailgating has gotten a negative image because of the excess drinking that takes place, particularly at the college level. But that's not what tailgating is about. In the e-mail age, tailgating is about face-to-face interaction with people."

Nevertheless, alcohol remains a school administrator's worst potential tailgating nightmare - with concerns about trash buildup and parking limitations not far behind. Responsible tailgating at its essence is responsible drinking, and that is the rallying cry of the three-year-old ATA. Largent says that kind of self-accountability ideally begins at the high school level, where rules forbidding alcohol are already in place. "More people are realizing that alcohol is not a necessary component to building team spirit," he says. "I think sending that message at the high school level is key, because alcohol really should be a non-issue if kids are on school grounds."

Dirnbeck, who has the authority to legally order a search for alcohol or drugs inside any tailgating vehicle on school property, prefers to take a more informal approach. "I told the kids, `Look, guys, we want you to have a good time, but we still want you to exhibit good sportsmanship and make wise decisions,' " he says. "It has been made very clear to our kids that they are at school for a school event, and they're going to suffer the consequences if they violate school rules. They police themselves, because they know we could shut them down."

"This is not Lambeau Field or Miller Park," adds Roherty about his school's stadium, which regularly attracts 3,000 fans to football games. "Therefore, we needed to tighten things up." He cites an underage drinking incident at one of Homestead's first tailgate parties last football season that resulted in local police issuing citations to students. At that point, Roherty and his staff realized they had entered new administrative territory. "That showed us that something like this wouldn't just be business as usual," he says, explaining why the school now requires students to obtain a laminated tailgating permit for their vehicles, which are then required to be parked in a designated lot. "We had to be pretty aggressive about enforcement. We felt it was important to put some parameters on tailgating, and that spurred the permit process."

In an effort to alleviate administrators' concerns about alcohol, the ATA last month was expected to kick off a national online initiative (atatailgate.com) to provide responsible tailgating guidelines specifically tailored to high school principals, athletic directors, students and parents, along with examples of successful tailgating ventures in school parking lots around the country. At some Texas high schools, for example, local supermarkets hold contests for the most inviting tailgate party and best grilling display.

After last fall's underage drinking incident, Roherty made an appearance on the school's video-announcement system and told the student body what type of behavior he expects at tailgate parties. That message was reinforced via student government leaders, team captains and other students who recognize the privilege they've been given. "Find your leaders - and I'm not necessarily talking about your kids with 4.0 GPAs - pull them aside and let them know what you'd like to achieve with a tailgating policy," Roherty says. "If you can get them to feel a certain amount of ownership in what you're attempting to do, then I think you can gain some major ground. That's what we've done, and I think it's feasible for other schools to do that, too."

Both Roherty and Dirnbeck say they're unsure how tailgating will impact pre-game festivities this fall, simply because many of their schools' recent tailgaters were seniors. Dirnbeck lost three of his blue guys to graduation. "Am I going to just have three blue guys out there, or are they going to recruit some younger kids?" he wonders. "To pass on this responsibility of appropriate behavior and appropriate school spirit is always the challenge. Somebody might think that in order to do something crazy, they have to add beer to the mix. But as long as nobody does anything stupid, we won't discourage tailgating."