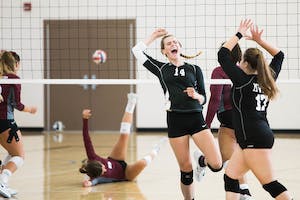 In this month when we customarily express our thankfulness for the blessings of life, there is much in the world of high school sports and performing arts for which we are thankful as the 2021-22 series of state championships commence.

First, the almost eight million participants in high school sports – and a similar number of students in performing arts programs – will be able to start and finish state championships in a normal timeframe for the first time since the 2019 fall tournaments concluded almost two years ago.

The pandemic brought 2020 winter championships to a halt, caused the cancellation of 2020 spring championships and created chaos throughout the 2020-21 school year. Although some mitigations such as mask mandates remain in some areas, it appears a full cycle of state championships are on schedule for the first time since 2018-19.

Second, several girls state championships will have an even higher level of significance as they are conducted for the 50th time, having started shortly after the passage of Title IX in June 1972.

After the landmark Title IX legislation was signed into law by President Richard Nixon on June 23, 1972, girls participation in high school sports skyrocketed, and state high school associations began to offer new championships for girls at a furious rate.

By 1985, all states plus the District of Columbia were offering girls basketball and track and field championships, followed by tennis (49), cross country (49) and volleyball (46); softball (38) and soccer (21) had started to make an impact across the country as well.

While there was not an immediate impact, the passage of Title IX also opened the doors for girls to participate in a couple of traditional boys sports – football and wrestling.

Girls first began playing on boys football teams in the mid-1980s and passed 2,000 participants in 2001; however, numbers have leveled off the past 20 years, with the latest totals at 2,404 participants nationally. During this period of time, however, there has been a surge in development of girls flag football programs.

As was noted in the recent October issue of High School Today magazine published by the NFHS, five states are currently sponsoring girls flag football (Alabama, Alaska, Georgia, Florida and Nevada), with Georgia, Florida and Nevada offering a state championship. The latest survey indicated 11,209 participants in girls flag football, and interest is expected to expand to other states thanks to a partnership between Nike and the National Football League which will provide state associations money to start pilot programs.

The sport with the biggest growth rate the past five years – both in terms of participants and addition of state championships – is girls wrestling. After girls only had the option of wrestling on boys teams for many years, 20 states have added separate championships for girls just in the past four years.

The first girls participants on boys teams began to appear in the late 1980s, but the opportunity to wrestle on girls-only teams and for a separate state team championship didn’t occur until 1998 when the Texas University Interscholastic League became the first state association to stage a girls wrestling championship, followed by Hawaii in 1999.

We salute all schools and state associations that are continuing to create new opportunities for girls to be involved in high school sports and performing arts.

Dr. Karissa L. Niehoff is in her fourth year as executive director of the National Federation of State High School Associations (NFHS) in Indianapolis, Indiana.