A new augmented reality innovation has made its way to the home of the Carolina Panthers, recently with a new experience offering engagement with fans through mixed-reality at Bank of America Stadium in Charlotte, N.C.

Augmented or mixed reality technology allows for interactive experiences that combine the real world and computer-generated content. The latest AR innovation, created by The Famous Group — a "fan experience company" in business more than 20 years — is an interactive, broadcast-ready version of the Panther mascot.

In a news release, The Famous Group said the augmented reality animal action at Bank of America Stadium "builds on the infamous mixed reality panther that debuted last year, with additional unique and individual moments that can be created by the team and then run during the game." The company also said the  new feature allows for unique moments and interactions, spontaneous storytelling and on-the-spot reactions to be created by the Panthers themselves and put into action and on-air almost instantly.

The giant faux operator-controlled Panther is part of The Famous Group’s ongoing partnership with the team, bringing technology for broadcast and in-venue mixed reality to the next level. The newest activation was unveiled during Thursday Night Football.

Last year, the Carolina Panthers showed the technology to their fans for the first time, which featured a gargolyle-like Panther running across the stadium, jumping on the scoreboard, and tearing down the opposing team's (New York Jets) flag with its teeth.

On Thursday, it was a pair of giant cats that leapt into the stadium, with one carrying the Atlanta Falcons' flag in it's mouth, and the other snarling down at people on the field. 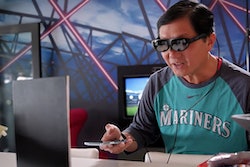 A new augmented reality innovation has made its way to the home of the Carolina Panthers, recently with a new experience offering engagement with fans through mixed-reality at Bank of America Stadium in Charlotte, N.C.
November 14, 2022

A University of Tennessee sideline reporter has been fired after social media posts from eight years ago resurfaced wherein she used the N-word.
November 1, 2022

The Big 12 reached an agreement on a $2B six-year extension of its media rights contract with ESPN and Fox that will keep the conference broadcasting on those networks through 2030-31.
November 1, 2022

The NCAA Division I Women's Basketball Championship game will be broadcast live on ABC for the first time in 2023. The game will air Sunday, April 2, at 3 p.m. ET and will be played at American Airlines Center in Dallas. The 2023....
August 23, 2022
Page 1 of 76
Next Page
Buyer's Guide
Information on more than 3,000 companies, sorted by category. Listings are updated daily.
Learn More
AB Show 2022 in Orlando
AB Show is a solution-focused event for athletics, fitness, recreation and military professionals.
Learn More