Nick Famularo will not return to Asbury Park High School in New Jersey as head football coach this year.

School board members voted Thursday night to suspend the prep coach who was allegedly found partially nude on the football field Nov. 6, according to NJ.com.

Athletic Director Mark Gerbino, assistant football coach and paraprofessional Lamar Davenport and teacher Matt Ardizzone were also placed on administrative leave with pay by the board. The board’s meeting agenda indicated the suspensions have been in effect since Nov. 8, and will remain pending the results of an investigation, NJ.com reported.

The board’s decision came 12 days after officers said they found the 26-year-old half-naked trespassing at the school’s football stadium with a woman.

According to the report, officers at the scene also said they found human feces on a rug and vomit on some of the football jerseys in the locker room.

Ardizzone — who was temporarily replaced as head wrestling coach during the meeting — assisted police at the scene Nov. 6, a teacher’s union official told NJ.com. Ardizzone also typically works in the district as an assistant football coach and gym teacher.

Thursday night marked the first gathering of parents, students and the board following the alleged trespassing incident, which police previously said did not result in an arrest or an investigation. The Asbury Park police have launched an internal affairs investigation following the incident.

While Famularo’s suspension through the football season was expected, some in the district felt the suspensions for the other employees were excessive.

“Those assistant coaches and the athletic director have done more for these kids than anyone, and way before (Famularo) came into the district,” Lynn Johnson, a kindergarten teacher in the Asbury Park school district for the past 21 years, told NJ.com.

“The boys in high school in Asbury live and die for the football team. Not that it’s right, not that it’s wrong, but it keeps them off the streets. (Ardizzone and Davenport) are their mentors, their coaches ... they’re not guilty of anything,” she said.

Asbury Park Education Association President John Napolitani called the district’s handling of the situation “unprofessional” during the public comments portion of the meeting.

LaShon Anderson-Bray, a parent of a 7th grader and Asbury Park resident, said she still had many questions about the coaches’ suspensions and felt the district has not communicated well throughout the process.

Robert Ward was appointed as acting head coach of the Blue Bishops through Dec. 15 — with one game left in the season against the Neptune Scarlet Fliers on Thanksgiving Day.

A police report of the alleged Nov. 6 trespassing incident indicates that police discovered Famularo with a woman at the stadium at 2:21 a.m.

When police found Famularo, he “displayed an altered behavior,” Asbury Park police spokesman Mike Casey said, noting that it was not known from what. One of the responding officers said he, “observed (Famularo) wearing a shirt and not wearing any pants.”

After Famularo told officers he was locked out of his vehicle, police discovered the vehicle registration was under his girlfriend’s name and thus could not unlock it, the police report said. When Famularo’s girlfriend arrived to pick him up, police said another woman walked out from the direction of the stadium saying she had the coach’s facility keys, cell phone, jacket and car keys. Famularo told police the woman was with him, the report noted.

Famularo was appointed to the head coach position in July 2020. He coached Asbury Park against Penns Grove hours after the alleged trespassing incident. Gerbino was not aware of Famularo’s encounter with police until after the game, a teacher’s union official said. 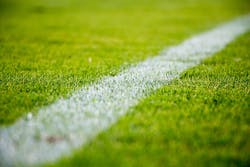