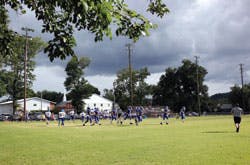 Earlier this year, district officials overseeing Easton Area (Pa.) Middle School considered eliminating the school's athletic program - a move that would have forced an estimated 400 seventh- and eighth-graders in 11 sports to join already-overburdened recreational leagues or find other constructive after-school activities. But by combining team transportation costs and eliminating some coaching positions, district officials were able to salvage all but the cheerleading squad, one of two girls' and one of two boys' basketball teams, and one of two wrestling teams.

Those four cuts, effective with the 2010-11 school year, will impact an estimated 60 to 70 student-athletes, according to Jim Pokrivsak, athletic director for the Easton Area School District. "The wrestling cut is the one that really hurts," he says, because area recreation organizations only provide wrestling programs through sixth grade. "The middle school kids will be left out in the cold."

The district's cost-saving measures are part of the latest trend in which middle school athletic programs are sacrificed ahead of freshman and junior varsity programs. But such strategies aren't always sufficient. Brevard (Fla.) Public Schools, facing the loss of $36 million in federal stimulus money at the end of 2010, is targeting both middle school and junior varsity sports programs for the 2011-12 academic year - potentially affecting more than 2,500 student-athletes. And as part of more than $22 million in budget cuts, the Adams 12 Five Star Schools Board of Education in Thornton, Colo. - the fifth largest district in the state - recently converted all seventh-grade sports to intramural programs and eliminated eighth-grade football and softball. High school sports weren't spared, either, as the district also dropped lacrosse.

Mike Blackburn, associate executive director of the National Interscholastic Athletic Administrators Association, calls the situation "alarming," with recent cuts at the middle and high school levels being the most severe he's seen during his 39 years as an administrator. "It's all about the bottom line," Blackburn says. "But philosophically, middle school sports programs are not so much building blocks for high school sports programs as they are about the individual development of the kids - and athletics is one aspect of their growth and maturity. By cutting that out, schools are definitely reducing the opportunities for those kids to not only participate but also to mature in the proper manner."

Pokrivsak, a 1984 graduate of Easton Area High, agrees. "Those tender ages of 11 to 15 are so influential," he says. "It's very important to have those kids be active and involved in their school, to take pride in what they're there for, because it leads to less vandalism and truancy. Between 3 and 6 p.m. is one of the main times that kids get in trouble. If they're involved in after-school activities, they're doing something positive. They're with us into the evening, and then they go home and hopefully get schoolwork done, because they need good grades in order to play. It just helps your whole school's atmosphere by having a good middle school athletic program."

Anticipating the partial or complete loss of Easton's middle school athletic program, Pokrivsak met with representatives from five local recreational organizations to determine, sport by sport, what each offers and how programming gaps in the community could be filled. He discovered that those organizations offer programs for basketball players and cheerleaders, but additional participants could overburden existing budgets. "If we cut all of the sports, where would the community leagues come up with the money to keep their expanded programs going?" Pokrivsak asks. "We would just be pushing our costs onto them."

Kurt Kolczynski, president of the Brevard County Youth Football and Cheerleading Association, may have a solution to that problem in his community. He suggested to Florida Today reporter Ed Pierce that a cooperative effort between schools and municipalities could be effective. "The schools have the 100-yard fields, and we have a structured program for kids," he said. "The schools have leftover equipment and uniforms, and I think if we could work together, it could work out in the best interest of the kids and the community." He added that his organization could create additional divisions for middle school and JV players, who would take to the schools' fields on Thursday nights under the umbrella of the youth league.

"It appears that we would be creating a youth sports atmosphere for middle-school-level sports," Blackburn says. "It's just a question of whether it will be a positive experience."

Pokrivsak, likewise, has his doubts. "The quality of what we offer in our middle schools - the competition, the training of coaches, the quality of the fields, the fact that kids are accountable for their grades and attendance on a daily basis - that's something that the community leagues can't offer," he says. "A coach at the community level may not know that a kid didn't go to school that day or is not passing his classes."

While some schools are finding ways to save middle school sports by implementing pay-to-play policies (already in place at many high schools), the model established 15 years ago at a middle school in Berkeley Heights, N.J., also might become more common. The William Annin Middle School Athletic Association is a parent-run 501(c)(3) nonprofit organization that sponsors 15 sports teams and clinics by furthering the booster club concept; parents provide all transportation, and seasonal fees are determined based on the cost of all expenses in a given sport.

Of course, fewer (or no) middle school sports teams means fewer (or at least less-experienced) student-athletes feeding into the local high school programs - compromising a talent pool already diminished by elite athletes who opt to play on club teams instead of for their schools. Easton Area High School has a rich wrestling tradition and 10 state titles, but its feeder program from the middle school has now essentially been cut in half.

Additionally, coaches stress fundamentals at the middle school level, and many middle schools still have no-cut policies that encourage young athletes to try different sports. Once those programs vanish, so do the opportunities. "My fear is for the kids who mature a little later and become your better athletes," Pokrivsak says. "If they're left out at a younger age, hopefully they'll still give sports a try in high school. If they don't, because they feel they don't have a chance, then we're going to see a decline in our high school programs."

Some schools manage to rebound from hard times. But, in the case of middle school sports - already considered by some to be nonessential - what if they don't? Have opportunities been lost forever? "I hope not," Pokrivsak says, adding that it's possible Easton Area Middle School may eventually restore the teams it is losing this year. "I hope this was a wake-up call for the community."