That college sports can be big business isn't exactly breaking news. Nor is the institutional strain that exists between academics and athletics. 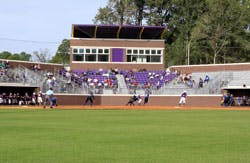 That college sports can be big business isn't exactly breaking news. Nor is the institutional strain that exists between academics and athletics. When academic or nonprofit reports of excessive spending on athletics spending go public, headlines always follow.

Look no further than "Restoring the Balance: Dollars, Values, and the Future of College Sports," a report issued last year by the Knight Commission on Intercollegiate Athletics that cited athletics spending as the source of tensions "between the core mission of universities and commercial values" and that called for widespread financial reform in college sports. The source of the report notwithstanding, it's impossible to ignore the countless other media stories it spawned throughout hundreds of U.S. college towns, underscoring the perception of friction between academics and athletics at a local level.

Combine those tensions with the economic crisis of the past three years, add the ever-increasing pressure felt by athletic departments to remain competitive in the development of facilities, and you end up with a potentially volatile mix. None of this makes the jobs of today's college and university athletics development personnel any easier. On the bright side, the greater economic factors affecting fundraising since the onset of the recession have forced many athletics development offices to reinvent their operations.

"Over the course of the past 10 years, I've certainly seen athletics fundraising offices grow in size, both in the numbers of people raising funds and in the numbers of people providing support at the office," says Dennis Young, associate athletic director for major giving at East Carolina University and vice president of the National Association of Athletic Development Directors. "But I know that because of the recent strain on universities' operating budgets, some of them are trying to balance the books for their athletic departments, and there have been some freezes on additional hiring."

Of course, if the goal of a university or its athletic department in a bad economy is to maximize revenue, freezing the hiring of fundraisers is the wrong strategy, says Donna Lopiano, former CEO of the Women's Sports Foundation and president of Sports Management Resources, a consultancy focused on growth and development challenges for athletic departments. "If there's one place you never want to cut in bad economic times, it's in the development office," Lopiano says. "That's where you need to devote more people. That's going to be your lifeblood. You've got to intensify your focus on those who can give."

In a centralized approach, athletics fundraising is merely a component, "on par" with individual academic colleges' fundraising efforts, within the larger, institution-wide fundraising plan, most often run by a school's foundation. More common at universities with big-budget athletic departments is a decentralized approach, in which athletics fundraisers report directly to the athletics administration. As King points out, each of these general strategies has its pros and cons for both the athletic department and the institution as a whole.

"An advantage of reporting through the foundation is that it allows you to more centrally coordinate your solicitations," King says. "You can end those complaints from donors saying, 'Why am I getting a solicitation from athletics one day and one from the university for an academic program three days later?'"

King adds that the natural advantage of a structure in which fundraisers report to athletics is that athletic directors take more ownership of the fundraising efforts, more closely tying them to individual teams, coaches or athletic events. For example, think of a fundraising program that would involve providing a high-dollar donor face time with the athletic director and head football coach, a spot on the sideline during the spring football game, premium seats at football and basketball games, or any number of other incentives that have proven successful at colleges and universities but that also require the time, energy and oversight on the part of athletics administrators and coaches.

"There's always the argument that says, 'If you only would have asked so-and-so to give to the philosophy department and not the athletic department, they surely would have done so," says King, who represents the university-wide development efforts at Wichita State. "We've come to know that isn't necessarily true. People give where their areas of interest are, and maybe they are interested in philosophy as well as athletics, but athletics does have that emotional, visceral draw that is challenging for the academic side to replicate. And when times are tight, like they have been, there's going to be some more competitiveness between athletics and academics."

"I go to conferences and I hear negative stories, and we've had some of our own in the past, but we now have a great working relationship with our athletic department," King adds. "It's so people-driven. Our current athletic director is a big-picture person, and he understands that athletics would not exist without the university. At the same time, we understand that athletics is the largest window to the university for many people, so we value the role athletics plays."

No matter how good the relationship may be between an institution and its athletic department, the current state of the economy has inspired virtually all colleges and universities to wield more institutional control over the development of athletics facilities. As colleges and universities shy away from incurring any more debt, an increasing number of capital projects rely on private fundraising, and silent fundraising periods are tending to last longer than ever before.

"We're still coming off this massive building spree, but if you look hard at institutional budgets, the economic pressure of the last three or four years has been killing those institutions that have a significant percentage of their budget tied to debt service, because that's an expense you can't cut," Lopiano says. "So another consideration for the institution is whether the athletic program can show that it has an income stream that is dependable and significant enough to fund debt service over a long period of time."

To that end, athletics development offices throughout the country are searching for creative ways to add dependable annual revenue streams through donor relations that may be in addition to the occasional major donation, annual gift programs or stand-alone capital campaigns. "Most people are trying to get away from this shotgun approach with each capital project, and instead they're figuring out ways to maximize annual giving over the long term," Lopiano says. "That's where add-ons like premium seating programs come into play."

Going after every available revenue stream is one part of a comprehensive development strategy that Young says has allowed ECU to remain competitive in the athletics facilities arms race. Despite the troubles of the economy at large, the ECU athletic department showed record-high revenues last year in both season ticket sales and its annual fund. Since March 2010, the department has already privately raised a majority of the $15 million required for a new basketball practice facility. A new softball stadium is opening this year, a new soccer stadium and track and field facilities are under construction, and $30 million in student fees has been collected to build a two-story facility to house an Olympic sports program.

Says Young, "We've been able to get a lot accomplished through the combination of indebtedness, student activity fees and private support."

Then came the recession, and with it the painful recognition by many athletic departments that they'd been taking steady revenue streams used to cover debt for granted. "The top 20 schools could maybe still get away with that, but the rest couldn't," says Lopiano, adding that the facilities arms race didn't necessarily slow for anyone, despite the economic downturn.

The result, says Lopiano, is that athletic development departments are now more willing to a) consider using student fees, and b) develop multiuse facilities, whether department-wide or even institution-wide. Lopiano sees this trend as a kind of "regression," but a good one, as athletics, student recreation and whole institutions are being forced to reintegrate their facilities development efforts.

"We're seeing that making sure the athletic department has a close relationship with the university's development office is absolutely essential for the greater health of the university," Lopiano says. "You should want maximum use of all the facilities on campus, and hopefully you can maximize the numbers of contributors. It's unbelievable how many athletics-only facilities have been built over the past couple of decades. And the argument is always that athletics prestige is what? Justification for bad business practices?"

Lopiano, for one, can't stress efficiency enough, whether referring to facility development or even specific approaches to maximizing contact with potential donors. For example, she points the more sophisticated athletic departments that are combining their ticket services departments with their development offices, as opposed to having both of those offices operating independently under the business manager. "That's a relatively recent trend," Lopiano says. "When the donor calls to ask about their ticket or their place in a premium club, that's a hugely important contact point and you can't risk not having it be a part of your development relationship program."

After all, development remains a contact sport, whether that contact is with donors or even fundraising colleagues representing different wings of the same institution. "It's still just a relationship game," Lopiano says. "And it's the kind of relationship building that's best done by individual development people, one on one."