On a sunny Saturday morning, as parents gather along the sidelines and chatter idly while their children warm up for a morning of soccer practice, the last thing on anyone's mind or lips are questions about the financial records of the organization. 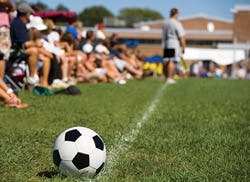 On a sunny Saturday morning, as parents gather along the sidelines and chatter idly while their children warm up for a morning of soccer practice, the last thing on anyone's mind or lips are questions about the financial records of the organization. "People think youth sports, what could possibly go wrong?" says John Engh, chief operating officer for the National Alliance for Youth Sports. "It's a mentality that we all have."

It's a mentality that has allowed embezzlement to remain an ongoing issue among youth sports organizations, even more so as of late, as well-meaning parents and volunteers step into leadership roles. "Probably the biggest trend in youth sports is that recreation departments have less resources to oversee the youth sports going on in their communities," says Engh.

A 2011 NAYS study found that 84 percent of parks and recreation organizations were leasing their facilities to outside groups. "Fifteen years ago, that would have been under 50 percent," says Engh. "Recreation departments would have been running those programs themselves."

Parks and recreation departments typically benefit from being under the umbrella of a city or county government, which brings with it a wealth of organizational resources and a system of checks and balances. But as parks and recreation departments cede more control, a variety of largely untested entities are stepping in to fill the void. Says Engh, "Whether they're big organizations overseeing multiple sports or smaller organizations overseeing just one sport, people don't understand that these aren't regulated businesses with qualified individuals overseeing finances. These are moms and dads appointed to be treasurers of volunteer-based boards, and who are literally, in some cases, overseeing millions of dollars. And that's really scary." 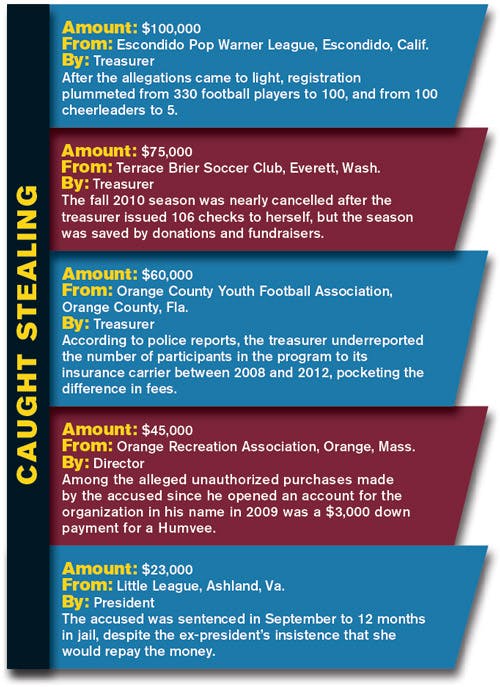 TEAM TRUST
The growing number of private organizations, coupled with the recently uncovered theft of $40,000 from two local youth sports organizations, prompted the offices of the district attorney and controller in Montgomery County, Pa., to develop a presentation to educate its youth organizations on fraud and financial oversight. "It's not just youth sports groups, it's all kinds of nonprofit organizations," says controller Stewart Greenleaf, Jr. "A volunteer fire company took a $200,000 hit. These groups can't have financial professionals as treasurers and presidents all the time. They're scrounging for volunteers and the expertise just might not be there, even though these are hardworking and dedicated volunteers. But we can share that knowledge and expertise that is well known among auditing and accounting circles."

It's a greater problem among smaller or newly formed organizations that don't yet have the resources in place to monitor the books properly. "The more volunteers, the wider scope of experiences you have - auditors, accountants, financial professionals, business owners," says Greenleaf. "The more money an organization has, the more it can afford to go out and hire an external auditor to go through books and help set up proper controls."

It's not a hard rule, of course, as organizational structure varies from group to group and community to community. The real issue is that it's too easy for organizations to take a casual approach to organizational management and instill too much trust in one individual. "These are people whose kids go to school together; they socialize with each other, and they can't imagine that this person that they know so well would take money," says Greenleaf. "There are two problems with that. One, you don't know who's coming down the line. Organizations change. Kids age out and organizations move on. Two, circumstances for individuals change. People lose their jobs, or there's an illness in the family. This can put tremendous financial pressure on people and make them start thinking about doing things they normally wouldn't do." 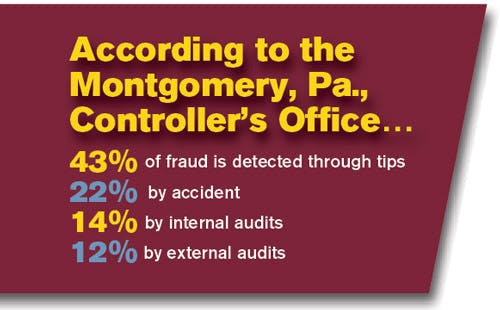 OUNCE OF PREVENTION
Safeguarding an organization from financial fraud is a two-fold process, says Greenleaf, relying on transparency and internal controls. "There is no one silver bullet, but there are a lot of small, inexpensive measures organizations can take to protect themselves," he says. "Find a bank that will require two signatures on every check. Make sure there's a separation of duties - one person who orders equipment, another who takes it in, another who reviews the invoice and pays for it. You have three people looking at the process. Not only does it break up the work, but it creates obstacles. You have other people watching who can raise the red flag." Even in smaller organizations where there aren't enough volunteers to make such a separation feasible, volunteers should make their records as transparent as possible so that anyone who is interested can account for each dollar spent.

Paying for services of a financial professional is one of the most effective ways to uncover fraud, though not always an option for organizations short on funds to begin with. Even in such cases, Greenleaf says, it doesn't hurt to ask for a little guidance. "Reach out to an accountant in the community - one that's trained as a certified fraud examiner would be the best bet - and ask for his or her help to review how the organization's books are kept."

There are other resources that can help volunteer organizations get started down the right path; NAYS offers a low-cost online clinic and other resources for volunteer coaches and administrators. "We've always had a training program for professional youth sports administrators, people who are at recreation departments and responsible for the kids on those fields," Engh says. "But those are people who have gone to school and have gotten degrees to oversee these things. A basic program for volunteers who deal with these things is really important."

When the right controls are in place to catch discrepancies, would-be thieves are also deterred from acting in the first place, which is really the goal. Scandals, whether embezzlement-related or not, are damaging to an organization's reputation, and even in the event that lost dollars can be recouped after an embezzlement charge, the organization's future may be doomed. "The reality is that you have to operate like a business," says Engh. "If this kind of thing happened to a business, that business would have to go back to square one; start over, rename the business, clear out the board, to be able to regain that trust. In the end, even though it's nonprofit, it's still a business, and if it doesn't get supported, it's going to be gone."

DEPARTMENTAL OVERSIGHT
While the influx of private youth sports organizations has eased the burden on parks and recreation departments, recreation departments shouldn't view such partnerships as a complete handoff of duties, Engh stresses. "They need to be more proactive, not just wait for something to happen," he says. "If you're just overseeing permits, that's not enough. You have to go in there and make sure that the people using your fields understand about financial management, insurance, training volunteers."

Recreation departments have a duty to monitor the organizations providing services on their behalf and ensure that they are held to acceptable standards in all aspects of the programming. "It's not just embezzlement - a fight between parents, bad officials, bad coaching. It could be anything," Engh says. "In a lot of cases, the parks and recreation department will allow a program to operate until something bad happens, and then it has the decision to say the city is going to have to come in and take over that program, or a new group is going to be the official choice to run that program for our community."

Besides oversight of facilities and programs, recreation officials are in the unique position to act as an unbiased mediator when issues arise. "Typically all these families that have the run, they are all friends and no one wants to challenge anybody," Engh says.

In such instances, trust becomes a detriment to objective oversight, according to Engh, who recommends that recreation departments have a staff member representing the department on the board or at the meetings for their local youth sports organizations, both to monitor the organization's operations and act as a conduit for concerns.

"Internal controls are obstacles," says Greenleaf. "No one thing you're going to do is going to stop theft, but the more obstacles that you put into place, the higher the chance that someone is going to stumble over one of them and get caught."