Of all the municipal recreation programs that suffered budget cuts during the Great Recession, perhaps no area has taken a bigger hit than aquatics. Public pools have never been a profitable line item in recreation budgets, bogged down by expensive initial construction costs and ongoing maintenance needs. Public pools drained their waters left and right to save on operational costs, and even with budgets rebounding, deferred maintenance has caused expenses to increase to the point where many programs have no choice but to close down indefinitely.

Despite the grim recent history, municipal recreation departments continue to see the benefits of aquatic programming outweighing the costs. The approach to new aquatic construction or renovations has changed, however, as more cities look to operate their aquatic programs as a business. "Outside of the Pacific Northwest and areas of the South, there aren't a lot of municipalities looking to develop a standalone aquatic facility, for the simple reason that they aren't going to be self-sustainable," says Darin Barr, a senior associate with recreation programming consultants Ballard*King Associates, headquartered in Highlands Ranch, Colo. The focus of most programs is to pair the aquatic component with other revenue-driving amenities that can help offset the cost, such as a fitness center, gymnasium or athletic fields.

"The programming of those facilities — whether standalone or paired — is off the charts in that there's not anything people aren't willing to try," Barr says, "and that's driven by wanting to generate as much revenue as possible." 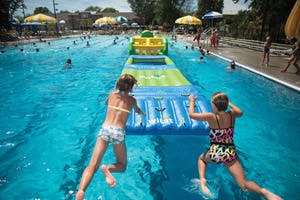 DESIGN FOR EVERYONE
Design of new aquatic facilities aims to be as multifunctional as possible, catering to competitive swimming, leisure use and fitness. "The most popular space in any aquatic center is shallow warm water," says Justin Caron, vice president and principal with Carlsbad, Calif.-based Aquatic Design Group. "You have to have that competitive course, but in order to offset that, you have to have as much warm shallow water as possible."

The most cost-efficient approach is to offer a leisure pool with lap lanes, Barr says, rather than offering multiple pools for each user group. "You're still seeing all of the mainstays — group swim lessons, group exercise classes, open swim, lap swimming, swim team practices, diving, water polo — but you're also starting to see more integration of traditional dry-side group exercise programs into the water. People doing Pilates in the pool, or early-morning yoga on the pool deck, putting a paddleboard in a pool and doing yoga."

Indoors or out, lazy rivers have seen a lot of repurposed utilization, according to Barr. "We're seeing people do really specific group exercise programming — moving with or against the current channel. You can have your swim lessons, all that traditional stuff going on, but you can also have 20 or 30 people come in on a weekday morning to walk in the river. That becomes as much of a social time as anything, especially for retirees or baby boomers." 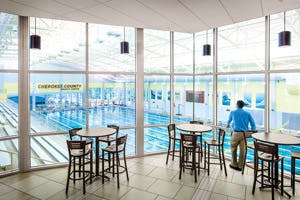 THINK OUTSIDE THE RECTANGLE
Newer aquatic construction might be all about packing as much functionality into the design as possible, but older, traditional rectangular pools or those designed for competitive and lap swimming can borrow some of the same design concepts and user amenities after the fact. "Programming-wise, these pools are doing fine with swimming lessons and swim teams in the morning hours, but in the afternoon, there's not a lot to draw anyone to the pool," says Barr.

There are ways to change that, of course. Inflatable structures or obstacle courses are one option becoming more popular, Caron says. "They're pretty inexpensive, a lot of fun and can generate some substantial revenue, whether you're charging to use them for a birthday party, or charging $10 and handing out wristbands to allow people to use them for a certain period of time, or just providing something to do in a big pool that will draw people in during the middle of the day."

And of course, they can be quickly and easily removed, transforming a body of water from leisure use back into an environment focusing on fitness or competition. "Anything portable — climbing walls, toys, inflatable bubble balls — these types of amenities are becoming pretty popular," Caron says.

Amenities are one way to go, and actual events are another. When the University of Arizona wanted to get more users at its 50-meter outdoor pool, administrators invited local campus DJs to come play music at the pool on Friday afternoons. "Those DJs had a following and would say, 'Hey, we're going to be on the pool deck this Friday, come on out,' and that really helped activate that space," Barr says. "We've encouraged municipal operations to seek out that type of opportunity."

Hosting events such as themed days —a luau or Christmas party in winter — or family movie nights are also ways to make the most of any pool, according to Barr. "Anything you can do to change that environment, make it more exciting," he says. "You're only limited by your creativity."

PRICE IT RIGHT
Municipal aquatic centers are first and foremost about serving the needs of the public — offering swimming lessons, exercise classes, recreational swimming opportunities — at an affordable price. But there are members of the public willing to pay more for extra service, an opportunity that aquatic operators would be remiss to overlook. "The golf course industry has shown a paradigm shift from revenues from greens fees and memberships to trying to make money in other ways — parties, rentals," Caron says. "We're seeing that shift in every form of business."

Party rooms, clubhouses, outdoor cabanas and other variations are becoming a mainstay of aquatic programs, as they should be, says Caron. "Party rooms are incredibly valuable spaces. They aren't just party rooms. Done properly, they're meeting rooms, wet/dry classrooms, lifeguard training rooms, community rooms. Similar to water space, the key is flexibility — design it to do many different things."

Users may also be willing to pay extra for access to specific aquatic amenities during special times. Though a FlowRider may be an expensive add for many facilities, the surfing simulator is an enticing attraction for both regional and local users. "For folks who are close by, they might really like to use that amenity, but they don't want to use it when it's open to the general public," says Barr. "Form a FlowRider club where you sell 'X' number of passes and people can come in before the facility opens or after it closes to use that space."

As much as monetizing individual amenities of an aquatic complex can add up, it's still important not to overlook membership revenue — and the task of actually getting people to want to come to the pool. Membership pricing structures can get complicated, setting different price points for different types of users, but the key is to create as many opportunities as possible, from seasonal memberships to single-use fees. "Maybe you charge $3 daily for a resident, $8 for a non-resident," says Caron. "Or maybe it's the entire family for $15, or a package for $20 that includes concessions."

Such events involve a bit of extra work and cost, but the payoff can extend beyond the event itself. "Getting a lot of people to your facility not only increases exposure of your facility, but then you also have more opportunities to market what other events you've got going on. whether it's use of the space in general, or programs you've got coming up," Barr explains. Staff can hand out flyers promoting upcoming events, scannable business cards from which users can download a coupon or schedule of activities.

A DOLLAR SAVED
When it comes to improving aquatic program profitability, increasing revenues is only half the story. "It's not necessarily a revenue issue, let's look at your expenses," says Barr. "You have to take a look at the full operation."

Whether year-round or seasonal, maintaining an aquatic facility is no light expense. Preventive maintenance, repairs and replacements should all be included in an operating budget. Spending the money to keep equipment in prime condition or replacing it with more efficient equipment results in operational cost-savings that benefit the facility in the long run. "More efficient pumps, heaters, variable-frequency drives, any number of other means of providing energy controls can reduce expenses," Caron says. "It really comes down to keeping your facility humming at the optimal level."

Ignoring repairs becomes a slippery slope — a run-down facility is less appealing to users, driving down revenues. Letting the cycle go on too long turns a community asset into a burden. "The key is communication," says Caron. "If you're adamant in communicating with a supervisor or city manager in saying, 'This is the reality of the situation. This is the amount of money we charge, the revenue, the expenses. If you give us $100,000 to replace equipment in our mechanical room, this is the effect it's going to have on revenue and expenses.' If you don't communicate these things, and you're just handing out bills, you're going to close."

Equally important is keeping the facility's staff in the communication loop. "Are you showing your head lifeguards your budgets so they understand the impact that sending someone home early might have?" asks Barr. "You don't want to tell somebody to send anybody home if it's sacrificing safety, but you haven't had more than 10 people all day, do you stay open the last three hours, or do you close? Sometimes those are difficult decisions to make, but you have to talk with your staff and make sure they understand the impact of staying open."

"Municipal aquatics are such a valuable thing to offer," Caron says. "There are so many opportunities that you can't do on dry land — injury recovery, regaining quality of life. That all goes away if the facility is mismanaged."