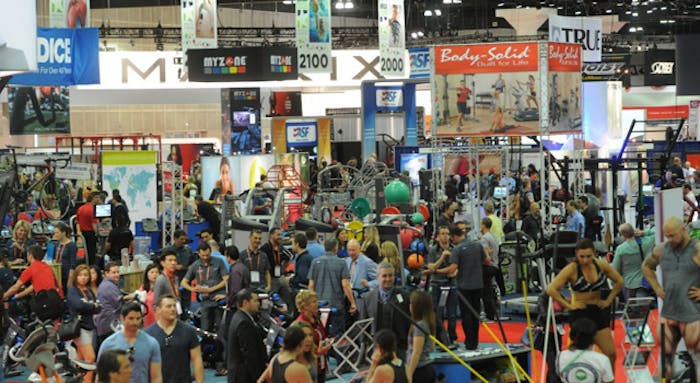 We recap the goings-on at IHRSA 2015. (Photo courtesy of IHRSA)

There was a lot of buzz in the room during Bill McBride’s session last Wednesday at the IHRSA show in Los Angeles.

True, attendees were interested in what McBride had to say about “Progressive Opportunities in the Health and Fitness Industry.” But what literally created the buzz was the noise from the headsets worn by international attendees. A row of glassed-in interpreters sat in the back of the room to deliver McBride’s session in Japanese, Chinese, Spanish and Russian.

McBride, president and CEO of Active Sports Clubs, asked for a show of hands of those in attendance from other countries. More than half—maybe two-thirds of the room—raised their hands.

Of all the International Health, Racquet and Sportsclub Association shows I’ve attended (this was my eighth), this might have been the most international.

Do you want to listen to an #IHRSA2015 session in Japanese? Spanish? Chinese? Russian? These folks make that happen. pic.twitter.com/JQOJI0L8zy

The key points of McBride’s session was centered on Under Armour, which is making a splash in the fitness industry with its recent acquisitions of MyFitnessPal, MapMyFitness and Endomondo. Why did Under Armour spend a combined $710 million on three fitness apps? It wasn’t to make a profit, McBride says. It’s to sell more shirts and shoes. People who work out more will buy more Under Armour apparel, according to the company.

Plus, Under Armour already is manufacturing fitness gear with built-in wearables. Hear more about Under Armour’s game plan from CEO Kevin Plank in this Bloomberg interview. Plank said Under Armour had 100 million workouts logged into one of its four apps (including UA Record) in the month of January alone.

The next day, I heard about another game-changer in Bryan O’Rourke’s “Navigating the Revolution: Creating New Opportunities Through Technology” session. O’Rourke had 90 minutes but zoomed through 85 slides is less than an hour, so kudos to him.

One of the slides was actually a video of a petite ballerina named Payal Kadakia who co-founded ClassPass, where people can work out at multiple studios for a flat monthly fee of $79 or $99.

We’re seeing more and more ClassPass stories from around the country. I’m even getting emails from people saying, “Have you heard of ClassPass?”

It turns out, Kadakia was actually in that session that day. (She didn’t know her video would be in the presentation.) It also turns out that Kadakia was in The Wall Street Journal that day, as ClassPass is reportedly valued at more than $200 million.

After O’Rourke showed the ClassPass video, he couldn’t contain his excitement about this new wave of revolution in the fitness industry.

.@PayalKadakia TY for attending my @Ihrsa preso #respect to u and ur cofounder #IHRSA2015 @classpass pic.twitter.com/7HHT43GDVL

O’Rourke’s session was at 1:30 p.m. Thursday, just a few hours after the trade show floor opened. I think IHRSA has created a Hunger Games of sorts with some of the top talent leading its sessions. At that same time, if I didn’t go to see O’Rourke, I could have attended a roundtable led by Joe Cirulli, or a roundtable led by Brent Darden that included Art Curtis, or a Canadian forum or any number of other good sessions.

On Friday morning, Robert Brewster, chair of the IHRSA board of directors, presented new IHRSA board members Jim Worthington, Ray O’Connor, Missy Moss and Larry Conner. Worthington brought 35 members of Newtown Athletic Club with him to the show. Pretty impressive.

Brewster also announced the incoming chair of the IHRSA board of directors, Molly Kemmer of MediFit, who becomes only the third female chairperson of IHRSA in its history.

One funny note that morning: The Midtown Athletic Club in Rochester, N.Y., was the recipient of the Outstanding Community Service Award. That wasn’t the funny part. The funny part was general manager Glenn William accepting the award on stage wearing Bermuda shorts. I’m told William regularly wears Bermuda shorts to meetings—along with a sportscoat, tie, knee-high socks and loafers.

Because of a meeting that came up, I had to miss most of Adam Bryant’s keynote that morning, which is why we didn’t do a separate post on him like we did for Arianna Huffington, Magnus Lindkvist and Kelly McGonigal. Bryant is an author and columnist for The New York Times’ Corner Office, and as a journalist, I would have loved to hear him speak.

Thanks to our good friends on Twitter, here are some of the highlights from his keynote:

'When it comes to innovation Silicon Valley has nothing on you' the fitness industry! Adam Bryant #IHRSA2015 pic.twitter.com/GDRRscTKbx

@nytcorneroffice gold nugget: If you don't give #KPIs to your people, smart people will make up their own #IHRSA2015 pic.twitter.com/SqAEPbrnHT

Adam of @nytcorneroffice asks how would you rate yourself on these 6 lessons of culture at #IHRSA2015 pic.twitter.com/ehHapZUOxT

Twitter helped spell rumors of certain individuals being at the show. By certain individuals, I really mean New England Patriots tight end Rob Gronkowski. Many of you saw him at the Octane Fitness reception Wednesday night (I did not), and many of you saw him on the show floor in the Hammer Strength booth (I did not). The story I heard was Gronkowski’s dad is a fitness equipment dealer and knows a lot of folks in the industry.

Thanks to Hammer Strength, here’s proof of Gronk doing Gronk things at the IHRSA show.

Rob Gronkowski made a surprise appearance at the Hammer Strength booth at IHRSA! Here's your posts from the action. https://t.co/JlkcGe6Cru

Other celebrities at the show included Gabriella Reese in the Lifeline booth, Lou Ferrigno in the GymGroups booth and Billy Blanks leading workouts at the Tabata booth. If you get this tweet, you will have made my day:

You can’t have an IHRSA show or a post-IHRSA show blog without at least a mention of Augie Nieto and the 10th BASH for Augie’s Quest, which raised more than $1.8 million Friday night. The Augie’s Quest team outdid itself once again with its reunion theme, complete with the USC Marching Band.

What an incredible night - the #reunionbash10 raised $1.8 million! Great things happen when we come together! pic.twitter.com/6fNTnyjB65

It’s going to take a little more effort for Augie to go cross-country to next year’s IHRSA show in Orlando, but from what I heard, he’ll be there with bells on. The fight against ALS does not take a break.

I mentioned this was my eighth IHRSA show but my first representing iClubs and Athletic Business. Was it awkward seeing my former colleagues at Club Industry? A little, but that went away in the wee hours of Wednesday morning, when I rode on the airport shuttle with my former boss. (Same shuttle on Saturday afternoon, too.)

For me personally, the show was a huge success. I can’t tell you how blown away I was by the countless number of friends who came up to me to congratulate me on the new gig. If I ever needed one, this was an affirmation that I made the right move. Plus, this means people really do read iClubs, and I’ll count that as a win, too.