AB Staff
Sep 22, 2017
AthleticBusiness.com has partnered with LexisNexis to bring you this content.
Copyright 2017 The Buffalo News
All Rights Reserved
The Buffalo News (New York)

"Unless you puke, faint or die, keep going!" - Jillian Michaels

When personal trainer Jillian Michaels exhorts contestants on NBC's "The Biggest Loser" to push through their fatigue until they drop, it's just entertaining TV.

To be sure, plenty of athletes and fitness enthusiasts follow a similar hard-core credo - especially when doing high-intensity interval training (HIIT).

But pushing oneself too hard can have dire consequences - even if you're in excellent shape.

As both the New York Times and Inside Edition recently reported, there's been an increasing occurrence of a rare - and potentially life-threatening condition - that can be brought on by intense, fatigue-inducing exercise: rhabdomyolysis.

Colloquially known as "rhabdo," the condition - in which damaged muscle fibers leak myoglobin and other cellular proteins into the bloodstream - can cause kidney damage and lead to renal failure.

"The most common causes of rhabdo are blunt force trauma injuries, like you see in auto accidents or high falls," said Jupiter, Fla., internist Dr. Marni Nicholas. "Exercise-induced rhabdo is pretty rare but it does happen - especially when people are doing a new form of high-intensity training."

Such as taking their first spin class.

An article in the April 2017 issue of the American Journal of Medicine discussed three cases - all treated by the same physician - of exertional rhabdo that happened after the patients had attended their first spin classes. (The same article noted that, of the 46 reported cases of post-spin-class rhabdo, "42 of these cases occurred following a first spin class.")

"If you're not accustomed to this kind of training, you shouldn't exert yourself to the point of fatigue or pain," said sports medicine physician Dr. Farah Tejpar of Cleveland Clinic Florida. "Knowing your own body - and its limits - is the most effective way to ensure you don't overdo it with a new training program."

Of course, when participants are in a group environment - such as spinning or Crossfit - they can feel pressure to keep with the fast pace.

That's why experts recommend informing instructors before the session starts that this is your first time. Adept instructors know to keep a watchful eye on newcomers and encourage them to back off if the tempo becomes too intense.

Other factors often cited in exertional rhabdo include heat and dehydration - and, for those who take statin medication, studies show the potential risk is compounded.

"A few years ago, I treated a high school football player for rhabdo," Tejpar said. "Summer practice had just started. He wasn't in top condition and, while he didn't have any medical problems during the practice, he had the telltale rhabdo symptoms the following day."

These included muscle weakness and swelling in his extremities, dizziness, nausea and dark reddish brown urine.

The player - as with most rhabdo cases - needed to be hospitalized and given intravenous fluids.

"The typical course of treatment is to fully flush out the kidneys," Nicholas explained.

The conundrum for athletes and exercisers who want to test - and exceed - their previous limits is that there's often no rhabdo "warning sign" that you might be pushing too far.

· Stay fully hydrated before, during and after strenuous exercise.

· Don't train to the point of pain.

· If you feel dizzy, nauseous, have muscle swelling and/or discolored urine in the days following a demanding training session, see a doctor immediately.

"The good news is that almost everyone fully recovers from exertional rhabdo - but you have to treat it," Nicholas said. 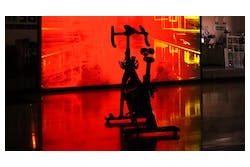