One on One: Pole Vaulting Expert Jan Johnson Sizes Up Safety of the Sport

A former world-class vaulter suggests improvements to the landing area. 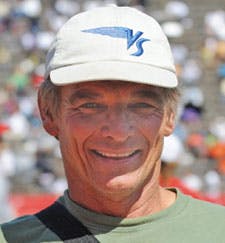 Jan Johnson's own pole vault career peaked with a world record in 1970 and an Olympic bronze medal two years later, but he's been raising the safety bar ever since. A member of the Pole Vault Safety Certification Board, Johnson has served USA Track & Field as National Pole Vault Safety Chair since 1995 and conducted pole vault camps across the country for three decades running. In June, he met with the National Federation of State High School Associations regarding suggested improvements to the pole vault landing area - specifically, padding the interior of the metal plant box - and he will take his case to ASTM International next month. Safety concerns have haunted the sport since Penn State's Kevin Dare died after dropping headfirst into the box at the 2002 Big Ten Indoor Championships - the second pole vault fatality inside a week. According to the Center for Catastrophic Sports Injury Research, as many as 19 student-athlete vaulting-related deaths have occurred since 1982 (last month, a 19-year-old collegiate vaulter died when he missed the pit during a rope-swing practice exercise). Paul Steinbach asked Johnson, whose daughter Chelsea vaulted to a silver medal at the World Track and Field Championships in August, to size up the state of safety in his sport.

Q: Why focus on the box?
A: This is the last area that really needs to be addressed. If you ask kids at pole vault camp to raise their hands if they've ever landed in or around the box area, 90 percent of them have. They've landed on their feet most of the time, but that's really where the padding needs to be. Is it going to be perfect? No. But it's going to be a hell of a lot better than what we have now.

Q: Would a padded box collar have saved Kevin Dare?
A: We built and designed the box collar with his accident in mind - and the probably 15 others that I know of just like it. It's every pole vaulter's worst nightmare. You come up short and realize you're not going to hit the pit.

Q: What do you say to schools considering dropping pole vault for safety reasons?
A: I think they have to do what they feel comfortable with. Number one, you have to have coaches who have passed a certification test. That's why the PVSCB is out there. We certify a thousand coaches a year, and if schools are going to offer pole vault, they need to provide the minimum standards in coaching. It's not difficult to coach the pole vault; it's fun, but you have to know a little bit. The important things are, does the vaulter get the pole to vertical and does he or she jump without over-bending the pole?

Q: You've been neutral on helmet use, which is currently mandated by six state high school associations. Is a box collar mandate in order?
A: This is what athletic directors and coaches need to know about, and I would like to see this upgrade mandated everywhere pole vaulting is offered. I think once we do that, we'll eliminate the last of the catastrophic injuries.