A rash of batted-ball injuries has renewed debate over the performance of baseball and softball equipment. 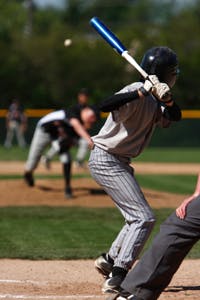 News this spring of injuries to baseball and softball pitchers from batted balls has been coming at us like a screaming line drive - forcing some sports administrators to try, again, to get a handle on the issue of bat performance and player safety.

On April 24, Chris Jakubauskas of the Pittsburgh Pirates was hit in the head behind his right ear, landing him in the hospital and on the 15-day disabled list with a head bruise and concussion. Earlier in the month, two college pitchers were tagged: Vanderbilt freshman Corey Williams had his right kneecap split in half by a line drive April 3 and was out for the season following surgery; and on April 1, Arizona's Kurt Heyer was hit in the head and briefly hospitalized.

These incidents followed an even more injury-ridden March. During spring training, Marc Rzepczynski of the Toronto Blue Jays suffered a broken finger that cost him six weeks of the season beginning March 30, and the New York Yankees' Damaso Marte was hit in the lower back and removed from a game March 17.

They were lucky. The other two incidents that month served as striking reminders of just how dangerous baseball - and, yes, softball - can be. On March 26, 15-year-old Kristi Denny was pitching for her El Toro (Calif.) High School softball team when a line drive caved in her forehead and orbital bone. Denny reportedly kept repeating, "My head's inside my head," before asking her mother if she was going to die. The injury likely would have been fatal, according to her doctors, had Denny not been wearing face protection - a device called GameFace - at the time. As it was, a new forehead was fashioned out of titanium mesh during a six-hour surgical procedure.

This season, several high schools nationwide have switched to a pitching distance of 43 feet for girls' fast-pitch softball. Denny, who is not likely to play softball again, delivered her last pitch from a rubber located 40 feet from home plate, and her forward momentum brought her closer still to the batter at the moment of contact.

By then, California assemblyman Jared Huffman of San Rafael had proposed a three-year moratorium on the use of non-wood bats in state high schools, pending further study, after Marin High School pitcher Gunnar Sandberg, 16, suffered brain swelling from a line shot to the head March 11. As Sandberg lay in a weeks-long coma induced by doctors who had removed part of his skull to ease the swelling, Marin County Athletic League officials banned metal bats for the rest of the season. However, the board of directors that manages high school sports for Northern California promptly overturned the ban.

Huffman's legislative efforts received a lift May 5 when the California Senate Education Committee voted 5-1 in favor of a two-year metal bat moratorium for high school baseball played in the state. His bill now moves on to the full Senate for consideration.

Are non-wood bats even a fair target? At first glance, one could argue that the most severe injuries suffered by pitchers this season - from a shattered knee to fractured skulls - came with metal bats in the hitter's hands, while those pitchers facing wood were spared life-altering consequences. Make no mistake, wood can do its share of damage, as evidenced recently in the form of skull fractures (Joe Martinez, San Francisco Giants, 2009), a sinus fracture (Steven Shell, Tacoma Rainiers, 2009) and a broken nose (Chris Young, San Diego Padres, 2008). Every case is different. Last August, Kiroki Kuroda of the Los Angeles Dodgers emerged completely free of fractures or internal bleeding after taking a line drive to the head that ultimately landed in the seats behind first base.

And that's what makes the questions about bats so hard to address. Studies indicate that a ball doesn't jump off metal bats to any significantly greater degree than it does off "good" wood. One would think that wood in the hands of a skilled Major League Baseball hitter, turning around pitches delivered at speeds approaching 100 miles per hour, is every bit as dangerous as metal swung by a sixth-grader. But who can say for sure? Certainly not the parents of Steven Domalewski, who was struck in the chest by a batted ball during a Little League game in June 2006 and suffered cardiac arrest. The resulting brain damage has left Domalewski, now 14, severely disabled - unable to speak but a few words and unable to eat, walk or use a bathroom without assistance.

Domalewski's parents sued, among others, bat manufacturer Hillerich & Bradsby, which released a statement that read in part, "We sympathize with Steven and his family, but our bat is not to blame for his injury." The web site of Little League International, also targeted by the Domalewskis, states that the organization "does not accept the premise that the game will be safer if played exclusively with wood, simply because there are no facts - none at all - to support that premise." That statement was posted nine days after the New York City Council voted in March 2007 to ban the use of non-wood bats in high school games. A similar ban currently exists statewide in North Dakota.

Non-wood bats are allowed everywhere else in America, according to Mike May, director of communications for the Sporting Goods Manufacturers Association and an active member of Don't Take My Bat Away, a coalition of players, parents, coaches, manufacturers and sport governing bodies assembled two years ago to publicly dispel myths about bat safety. DTMBA has gone so far as to put together a list of incidents involving injuries caused by wood bats, including the splintering of maple bats, most of which are now banned in Minor League Baseball. "If a player is injured by a ball off a wood bat, people go, 'That's just baseball,'" May says. "If it comes off a non-wood bat, they blame the bat. And yet the exit speeds are very similar when a ball is hit with either bat's sweet spot."

The view that wooden bats are costly and slow down the youth game unnecessarily is echoed with surprising volume throughout the sports blogosphere. Purists counter that true hitters emerge only after years of swinging wood.

Changes are impending - in bat certification, if not composition - at the college and high school levels. Beginning Jan. 1, 2011, the NCAA will require that all bats be BBCOR-certified (BBCOR stands for bat-ball coefficient of restitution), a standard May says brings non-wood bat performance more in line with that of wood than current BESR (ball-exit-speed ratio) certification. The NFHS is scheduled to follow suit as of Jan. 1, 2012. May insists that these are not injury-prevention measures.

"We can't pass any rules that will keep injuries from happening. Even if you play with a plastic ball and bat, there's going to be an injury somewhere along the way," he says. "The object of the game is to hit a hard ball hard - always has been, always will be."

Others disagree. "Insane, that's what it is," wrote Orange County Register columnist Jeff Miller in reaction to the incidents involving Denny and Sandberg. "The lives of our children should not be at risk while they're at play."

May cautions against confusing such incidents for the norm. He points to data presented April 21 by the Center for Injury Research and Policy at Nationwide Children's Hospital in Columbus, Ohio, that places baseball far down the list of the most injurious sports. Moreover, injuries in baseball are more likely to be caused by player collisions than batted balls, May says. "Think about the thousands of pitches that are thrown every evening at all sorts of levels in this country from now through October, and the game just goes on," adds May. "The people who make these bats, and those who make the balls and protective gear, they all want the game to be safe and fun, and for the most part it is."