The year 2010 was a particularly violent one in college athletics, and not just on the fields of play. According to research compiled for the National Coalition Against Violent Athletes, Lexis-Nexis searches turned up more than 600 reports of violence perpetrated by student-athletes against women last year. 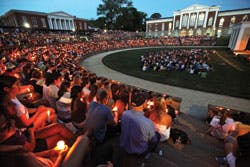 The year 2010 was a particularly violent one in college athletics, and not just on the fields of play. According to research compiled for the National Coalition Against Violent Athletes, Lexis-Nexis searches turned up more than 600 reports of violence perpetrated by student-athletes against women last year. Two cases in particular caught the national media's attention.

On May 3, University of Virginia women's lacrosse player Yeardley Love was found dead in her apartment. A day later, George Huguely V, a member of the UVA men's lacrosse team, was charged with Love's murder. Huguely, who had dated Love briefly, admitted to Charlottesville police that he kicked open Love's apartment door, that he shook her and that her head repeatedly hit the wall. Evidence suggests that previous acts of aggression by Huguely had precipitated the couple's break-up. A preliminary court hearing is scheduled for later this month.

On Sept. 10, St. Mary's College freshman Elizabeth Seeberg consumed a lethal dose of the anti-depressant Effexor. Ten days earlier, Seeberg had reported to University of Notre Dame police that on Aug. 31 a member of the school's football team had assaulted her in a residence hall. She had also sought hospital treatment and submitted to DNA testing, even as the unnamed player continued to compete for the Fighting Irish.

"Lizzy did everything right. She did everything that she was supposed to do," says Kathy Redmond, who was raped by a University of Nebraska football player in 1991, settled (begrudgingly) her Title IX case against the school and her assailant in 1997 and founded the NCAVA the following year. Since then, Redmond has counseled countless victims of student-athlete violence, and she knows firsthand how protective teams and entire universities can be of their athletes and institutional reputations. She has heard accounts of on-campus rape counselors, perhaps under pressure, warning victims of the difficulty involved in pressing rape charges. "They use the phrase, 'You'll be raped all over again,'" Redmond says. "You have to understand when people - in this instance, women - are under emotional duress, they can't make those decisions. They want to say, 'Yeah, I just want it to go away.' But I ask every single one of them, 'Can you live the rest of your life knowing that you had this opportunity to do something about it, and you didn't take it? You know you have to do something.'"

Redmond has long observed the NCAA doing little, if anything, to craft anti-violence policy, so on Oct. 25 of last year she sent the association her own 969-word draft - complete with sexual harassment and gender violence definitions, as well as suggestions for the handling of investigations and disciplinary actions. By Nov. 17, she was face to face with NCAA president Mark Emmert, who had been in office little more than two weeks. Having read Emmert quoted as saying violence prevention had to become an NCAA priority (a revelation that Redmond admits made her cry), she knew she would get in the new president a sympathetic ear. It was the first such meeting in the NCAVA's 12-year existence.

"People see me as this tough person, because I'm outspoken and assertive, but they don't realize where that comes from," Redmond says. "This is not only a passion, it's an emotional thing for me, because I deal directly with these women who have had their lives completely turned upside down."

A MURDERER AMONG THEM Months after he admitted attacking his former University of Virginia girlfriend, George Huguely, who like his victim played lacrosse at the school, faces a preliminary court hearing this month.

Redmond's candor is plainly evident on the NCAVA Facebook wall, where she reports on and applauds schools for measures such as suspending players pending gender violence investigations, while she takes others - Notre Dame tops among them - to task for their public stonewalling and internal inaction. "Every campus is going to have individuals, athletes or not, who are problems, and I recognize and accept that," Redmond says. "But when schools know what's going on and try to act like it's not, or take it a step further and launch an attack against the victim, that's completely unacceptable to me. And it's completely unacceptable for me to try to be nice about it."

Even as the NCAA has been slow to join the gender violence discussion, individual campuses have stepped up their own education efforts. Sheila Kay Ridley authored a gender violence prevention plan for the University of Colorado athletic department mere months after being named its first director of student-athlete wellness in January 2009. Recent initiatives on the Boulder campus have included a presentation to freshman athletes by CU's gender violence prevention and education coordinator, representatives of the CU Office of Student Conduct and the Boulder County district attorney's office regarding education, prevention and legal consequences of gender violence. A separate breakfast event for coaches featured presentations by the university's Office of Victim Assistance, the Boulder County DA's office and a representative from a community organization called MESA (Moving to End Sexual Assault). "We're committed to providing resources for the student-athletes and staff of the University of Colorado athletic department to develop a comprehensive understanding of gender violence and their role in preventing gender violence," Ridley says. "We will strive to foster a community that creates a climate and culture of gender equality and that embraces diversity."

For some schools, seeking the input of a rape counselor is to admit that a problem exists, according to Redmond. That hasn't been a hangup at Nebraska, where athletic director Tom Osborne invited Redmond to address the football team in 2008. It was the first time she had set foot in the state since leaving the university in the wake of her own ordeal. Osborne, who was the Nebraska football coach at that time and has since apologized to Redmond, instructed her to tell the players what it was like to be assaulted by one of their kind. Doing so was "hugely therapeutic for me," says Redmond, whose father played baseball for the Huskers and whose great-great uncle penned the school fight song. "It was a victory for me."

The players, she adds, were completely engaged, asking Redmond for her personal feelings on topics ranging from football to sex, and she addressed each with characteristic honesty. When Redmond asked the players how many of them knew someone who had some experience with rape, nearly every hand went up. "This is what I was trying to convey to Emmert," she says. "These guys deal with violence against women on a near-daily basis. They have teammates who might be doing it. They have friends who have been victims of it, and yet no one is talking to them about it."

At football practice following her presentation, a player approached Redmond and told her, "We needed to hear that."

Others are hearing Redmond's call to action, too. Ridley, for one, characterizes Redmond's meeting with the NCAA as "huge" and a sign that positive change is coming. "It feels like there's slow progress around gender violence prevention and education," Ridley says, "so her meeting with the NCAA is a kind of validation that we're all moving in the right direction."

It continues to be a journey of healing for Redmond. "A long time ago, when this was me going through the same thing, when I was in the throes of all of this legal action against Nebraska, there wasn't any public support," she says. "I now feel like people are starting to listen."