Before the rules changed at Old Settler's Recreation Center, open-gym basketball at the public facility in McKinney, Texas, was fraught with disorganization, disrespect and disruption. 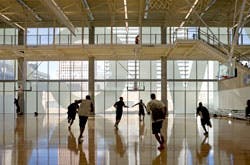 Then staff members at the 10,000-square-foot multipurpose facility implemented new zero-tolerance policies regarding language, dress and physical behavior. All participants must now sign in upon arrival, games are timed and employees interact with players to ensure everyone knows the rules and regulations. Players are expected to police each other, and violators will pay a price. "All players understand that if the overall environment escalates to inappropriate levels of chaos or disruption of other programs, all players are subject to being asked to leave," Drane says.

Although the open-gym situation at the Life Fitness Center in Bettendorf, Iowa, wasn't quite as dire, administrators at that city's parks and recreation department had their own user issues to address. "There was not enough space for open shooting for kids," says program coordinator Tracey Lopez, adding that adult basketball players would engage in full-court contests that left little room for casual participants. So Lopez and her staff developed an open-gym schedule that allows for full-court play from 4:30 to 6 p.m. on Mondays and Wednesdays. "The rest of the time is for open shooting and programs only," she says. The policy is posted on signage in the building, as well as on the facility's website and in its user guidelines.

While the majority of multipurpose athletic facilities have open-gym policies in place aiming to curtail everything from swearing to fighting to betting, many of those policies have no doubt undergone alterations in order to keep pace with the needs of various user groups. Changes often are similar to the ones implemented by Old Settler's Recreation Center and the Life Fitness Center, but also may include limiting the times of day that nonmembers can participate and creating contracts that increase player accountability (see "A Matter of T.R.U.S.T.," below).

"We have two courts, and Court 1 is always for open basketball," says Jackie Stanley, manager of the Rio Vista Recreation Center, a municipal facility in Peoria, Ariz. "We don't bar full-court games; that's a legitimate use of the court, and there's much demand. We do keep a junior hoop in a corner of the gym and have designated times for kids under 12 to play."

Stanley adds that her facility is only four years old, "so it's been a learning experience" adjusting to public demand and adapting policies to fit its needs.

But many administrators will tell you (usually anonymously) that developing policies and ensuring adherence to those policies are two different things. As one public recreation supervisor admits, "It comes down to our staff not enforcing our rules."

Enforcement of gymnasium behavior policies can occur in several ways. It's easy at facilities in which a sign-in desk or other checkpoint area is located near the gym and provides an unobstructed view of activities. "Our design allows the front desk to monitor the gym through a staff-only entrance," Stanley says. "We usually prop the door open to listen for language. We also have security cameras, which may be a deterrent."

An increasing number of facility operators also appear to be hiring people specifically to be gym monitors, or designating staff members for gym-patrol duty. The LIFECENTER Health & Fitness Club, a facility of the Bartlett (Ill.) Park District, doesn't even open its gymnasium for public use unless a supervisor is available. "We pride ourselves on being a community center and have a rated-G-for-everyone policy," says health and fitness manager A.J. Collier. "No foul language or abusive behavior to patrons, staff or facility and equipment."

"We have a mechanical divider that we drop down every Monday, Wednesday and Friday from 5 to 8 p.m.," says Mike Mashburn, a recreation supervisor at the West Sacramento (Calif.) Recreation Center. "Half the gym is reserved for 12-and-unders, and the other half is reserved for older players. We have staff regularly monitor that to ensure fair play is taking place."

Gym monitors can be full- or part-time employees, and some managers aren't afraid to call for backup if a situation becomes too much for staff members to handle. Tony Lipinski, director of parks and recreation for Roseville, Mich., has requested police assistance with behavior-policy violators, as has Lisa Gebhardt, recreation superintendent for Worcester County, Md. She says a certified letter is sent to habitual offenders at a county-run facility under her watch, informing them of their misbehavior. "If these users come into the facility, the regulations are explained to them, and then they are told about the suspension and asked to leave," Gebhardt says. "On one occasion, because of a serious offense, a citizen was banned from the facility. That citizen returned and the police were called; he has not returned since."

"We have a gym attendant during busy times," adds a recreation superintendent who requests anonymity. "Most of the participants are daily drop-ins, so we make them leave if they don't follow the rules. If they won't leave, we have them arrested for trespassing and disturbing the peace. If you are a municipality, get your police involved. It is amazing how well everybody gets along when the police do a walk-through."

Those are extreme circumstances, facility operators say. More often, all it takes is a nudge from a staff member to get participants to watch their own behavior. That nudge can take the form of a reference to policies posted on signs and in facility literature, or a suggestion that open-gym privileges could be revoked if violations continue. "We ask them politely to follow the rules," says a parks and recreation director. "If they don't, we ask them to refrain from using our gym at all."

"Most members feel that the rules we have in place are for their safety and in everyone's best interests," says Erica Smith, facilities director at Gainesville (Fla.) Health & Fitness. "But we will always have people who complain because they want to do something, and they can't understand why we don't allow it. For example: No dunking. Basketball players constantly complain about it, but I have known at least four people who have broken fingers because of dunking."

Some facilities don't even bother with creating gym-behavior policies or have done away with open-gym programming entirely. "Our gyms are rental use only, or scheduled program use where a staff member is present," says Tanya Haywood, recreation facility division manager for the City of St. John's in Newfoundland, Canada.

"We really don't use a policy," adds Lori Schultz, program manager at West Wood Health and Fitness Center in Pewaukee, Wis. "It is all about communication, one on one, to members and guests. Our worst behavior comes from new guys who don't know the culture and use foul language. But with prompts, they all do well."

Other suggestions for making sure all open-gym participants "do well" include the following:

However facility operators decide to handle the sometimes-dicey behavior issue, LIFECENTER's Collier suggests consistency. "Do not make exceptions to your rules," he says. "Otherwise, the exception becomes the rule." 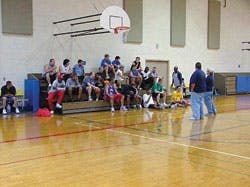 Gian Lauro comes from an Italian family in which food is king. So it made sense that he chose a cookout to introduce significant open-gym policy changes to adult male basketball players. "My mom always told me, 'The best way to get through to somebody is through his stomach,' " says the recreation area manager for the Stagecoach Community Center, one of two municipal rec facilities run by the Carlsbad (Calif.) Parks & Recreation Department. "You've got to feed them. So we put on a free barbecue."

It has been seven years since Lauro first sat players down on bleachers and explained to them the T.R.U.S.T. (Teaching Respect, Unity and Sportsmanship through Teamwork) program - the integration of good sportsmanship through comprehensive training and communication that already had been part of the city's youth sports efforts for four years. All open-gym participants signed a code of conduct stating they would maintain a safe and positive environment, treat others with courtesy and respect, honor the rules and engage in sportsmanship.

Then Lauro let them play their games. Afterward, he served up a hot dogs-and-chips feast as a thank-you for their cooperation. The whole event cost about $75, and Lauro has repeated the process multiple times every year at both the Stagecoach and Calavera Hills community centers.

Today, the award-winning T.R.U.S.T. program has evolved into a culture that permeates nearly every activity the recreation department offers. "It has expanded to open gym for basketball, volleyball and badminton, and even to our senior center," Lauro says. "Believe it or not, we get some feisty people who play bingo, and it gets kind of unruly."

Is it awkward telling grown men how to behave on the basketball court? "I've seen guys roll their eyes, and some make funny remarks - just like the jokesters in class," Lauro says. "But deep down, they all know where we're coming from. I think it's easier having rules and a code of conduct in place. That way, if someone is swearing out of control, we can raise the baskets, and boom! That's it. The code of conduct has been broken, and open play is now over."