Athletes Saving Athletes Trains Teammates to Protect Each Other

When one of his teammates on the Santa Fe Christian boys' lacrosse team was knocked out by a wayward lacrosse ball during a January practice, Grant Lucier knew exactly what to do. 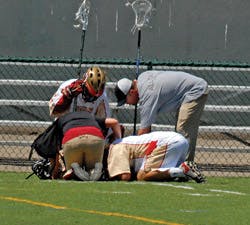 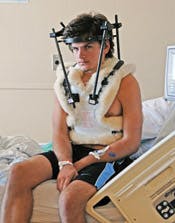 When one of his teammates on the Santa Fe Christian boys' lacrosse team was knocked out by a wayward lacrosse ball during a January practice, Grant Lucier knew exactly what to do. He assigned one player to alert the certified athletic trainer who works at the Solana Beach, Calif., school, and he instructed other teammates to not move the fallen player - just in case he'd suffered a neck injury.

As things turned out, the ball triggered a concussion, and the injured player eventually recovered. But for Beth Mallon, executive director of San Diego-based Advocates for Injured Athletes, the incident provided positive reinforcement that the nonprofit organization's new pilot training program, "Athletes Saving Athletes," is working. Only days before the incident, Athletes Saving Athletes was launched at Santa Fe Christian with the intent of eventually taking it nationwide, and Lucier was among the first participants.

"Instead of players standing around asking, 'What do we do?' we want them to assign people to specific tasks," Mallon says about the training sessions for select student-athletes conducted at six San Diego-area schools between January and May. "Athletes are first responders, so they need to know how to put an emergency plan into action. It's very clear that Grant knew how to take charge and set things in motion, and I'm convinced we'll be hearing more stories about athletes like that who stepped up and made a difference."

The same Santa Fe Christian lacrosse field on which Lucier acted so swiftly was where Mallon's son, Tommy, sustained a potentially fatal neck injury after a collision with an opposing player in 2009. Though the hit initially appeared innocuous, Mallon felt a numbness in the back of his head. He was attended to by a certified athletic trainer, placed on a spine board and transported by ambulance to a nearby trauma center, where doctors discovered a neck fracture and a dissected vertebral artery. After nine months of rehabilitation, Tommy Mallon has recovered but will never play sports again. "What happened to Tommy was just a hair from going the wrong way," Beth Mallon says. "So I can't just step back and say, 'Good for me: I had an athletic trainer, I had good medical care.' What happens to the kids who don't?"

Enter Advocates for Injured Athletes (which Mallon formed after Tommy's injury) and now Athletes Saving Athletes, which could potentially be the next step in the evolution of traumatic injury awareness at the high school sports level. Nearly 40 states now mandate that student-athletes at public schools be removed from participation if there is suspicion of a concussion and not be allowed to return to play until cleared by a medical professional. Most states also require an educational component for coaches, parents and players, which Athletes Saving Athletes helps fulfill.

Under the pilot program, funded through a partnership with a local branch of the American Red Cross, a maximum of 50 student-athletes per school - typically chosen by coaches and administrators based on responsibility and leadership characteristics - are eligible to participate in the curriculum developed by Advocates for Injured Athletes' panel of medical experts. The program has the official support of the National Athletic Trainers' Association and includes pre- and post-tests; CPR and AED training; information about how and who to call for help in the event of an emergency; educational videos featuring three California student-athletes (including Tommy Mallon) who have survived either a head/neck injury, sudden cardiac arrest or heat stroke; and instructions on how to recognize the signs and symptoms of life-threatening medical conditions such as diabetes and asthma.

"When those kids come in and we ask them, 'Do you know what an AED is?' they have no idea," Mallon says. "Athletes don't think anything is ever going to happen to them. And unless they've gone through some junior lifeguard training or learned CPR in a babysitting class, they're not familiar with anything like an AED. They've never been fed the information. But by the end of the program, every kid knows where on campus those devices can be found, and they know that an AED is the only way to save someone who has suffered sudden cardiac arrest. When they leave the room that day, the knowledge they have - and the likelihood of them saving a life - is so much greater."

"Right now, assuming they get the funding, this program will take off," says Christina Scherr, a part-time certified athletic trainer at Torrey Pines High School in San Diego, which was the second school to adopt Athletes Saving Athletes by training 44 participants in March. "As an athletic trainer, it's a no-brainer. This program is invaluable to youth athletic programs. Period."

Scherr, who now helps present Athletes Saving Athletes training sessions, encourages all participants to become "ambassadors" and share what they've learned with coaches and teammates. To that end, each participant is given a lanyard with three laminated cards featuring information about signs and symptoms of concussion, sudden cardiac arrest and exertional heat illness. Explains Scherr: "As we're handing these out, I say, 'Look, we have no way of tracking that you've talked to your teammates or your coach. So we're asking that you pay it forward, that you tell at least one person about what you learned today, and use this lanyard as a tool.' I had one student who came up to me and said, 'You know, I learned more today by being in this class than I would have going to school.' "

"When school volleyball starts in the fall, I plan on explaining to my team my experience and stressing to them the importance of looking out for your teammates and what to do when faced with a situation," says Alexandra Johnson, a junior volleyball player at Santa Fe Christian who was in the stands the day Tommy Mallon was injured. "I left the session with confidence knowing that I could recognize specific things such as heat stroke or cardiac arrest and have an idea of what to do."

"I don't think this is something kids are going to take lightly," Scherr adds. "They feel empowered. They have a sense of knowledge that they can save a teammate's life. That's huge. I get chills just saying that."

Coaches at participating schools are asked to encourage that empowerment, and some have even attended ASA training sessions with their student-athletes. Scherr reports that at least one Torrey Pines coach wants his entire team to take the course, but others have expressed little interest. "It's really hard sometimes to explain something that's brand new and get them invested in it," Scherr says. "It's disheartening."

"There are definitely going to be coaches who don't want this, and I'll go to the coaches who want it or might want it," Mallon adds. "I'm not going to spend time trying to cram something down somebody's throat."

By the time the pilot program is complete later this summer, Athletes Saving Athletes will have been presented to some 300 student-athletes and adopted by as many as 10 San Diego County schools - including those with a certified athletic trainer and those without.

Then the really hard work begins. Mallon is seeking corporate sponsorship and exploring grant opportunities to help take the program national and keep it free of charge, as well as considering shortening the eight-hour training sessions to two hours. "I may be naive, but I have a feeling that we will get corporate funding," she says. "I have to believe that a target audience of 7.4 million high school student-athletes is a pretty good one for something like an insurance company."

Indeed, funding for materials and instructors appears to be the biggest stumbling block right now, and that will ultimately determine how far east ASA extends. Although she's confident it will move past the pilot stage, Mallon also realizes that the reach of Athletes Saving Athletes could be limited. "If it fizzles from here, I would feel very satisfied that we had a vision, we created and launched a program, and we trained 150 student-athletes in three months," she says. "But I don't think it will fizzle. We have started a culture change."