ROCK THE CRADLE There has been at least one hazing-related death per year on the college level since 1970, due in part to the pressure associated with team bonding. (Photo by shutterstock.com/Aspen Photo)

When it comes to hazing incidents serious enough to gain national attention, the big question posed again and again recalls the sad refrain from the old ballad, "Where Have All The Flowers Gone?" Specifically, when will they ever learn?

The answer to the song's refrain is that with hazing, as it pertains to athletics and other school organizations, they will never learn from the tragedies of the past, according to hazing expert David Westol of Limberlost Consulting Inc.

"I don't believe that high-profile cases will cause an abatement," says Westol, a former assistant prosecuting attorney in Michigan and veteran football referee. "Undergraduates have a historical perspective of about six months. Combine that with the typical 'It won't happen to me/us/our team' mentality, plus other rationalizations, and we've barely moved the needle."

A University of Maine hazing survey conducted by Professor Elizabeth Allan and colleagues found that more than half of today's college athletes and organization members have experienced hazing. Equally disturbing, almost half of all high school students will graduate having experienced at least one hazing incident.

So if undergraduates refuse to heed the dangers of hazing, which has claimed at least one life a year on college campuses from 1970 to 2014, then what has worked or can work to at least heighten national awareness? 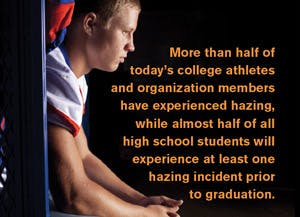 CULTURE CLUBBED
"Change comes with a change in culture — what is acceptable and what is not acceptable — on a team," says Westol. "Those dynamics are set in place by the athletic director, the coaches and university administrators."

While hazing may give athletes a quick-fix bonding, the drawbacks often outweigh the perks, particularly if one of more participants refuse to go along with the hazing or opt to report it — as state law in Texas mandates, for example. Norm Pollard of Alfred University co-authored a comprehensive study on collegiate hazing practices in cooperation with the NCAA. Pollard stresses that hazing deprives the hazed and hazers alike of true, valid team-building under the supervision of coaches and respected alums who were former athletes. "Part of the process is connecting with 'elders' — older adults with wisdom who can help the team with effective team-building and bonding," Pollard says.

Meanwhile, the National Federation of State High School Associations has been at the forefront of taking action against high school hazing involving alleged sexual assaults (most recently in Utah, Illinois and Oklahoma). In addition to sponsoring many conference events on hazing for coaches and student leaders, the NFHS offers through its website (www.nfhs.org) targeted participant support and resources for those affected by hazing.

"The NFHS has made national resolutions regarding anti-hazing issues with the high-profile Citizenship and Equity Committee, the largest non-sport committee in the Federation family," notes Elliot Hopkins, assistant director of NFHS. "Finally, the NFHS has a staff person dedicated to speak to students, parents, administrators and coaches about hazing prevention throughout the United States and Canada.

"We are committed to stomping out high school hazing," Hopkins adds.

Perhaps the best-known consultancy program to gain the approval of the activist organization HazingPrevention.org is the Novak Institute, which is run by campus safety and risk-management specialist Kim Novak. Offering panels and interactive participant programming, the Institute enrolls a wide range of interested professionals such as athletic directors and coaches. According to Novak, what actually works to curtail hazing is "targeting the culture of athletics and recognizing the role of hazing on a team, and then utilizing the strong voices of coaches, team leaders and alumni to send a message that hazing will not be tolerated."

The Institute teaches attendees to implement workable systems to create or change a hazing culture on campus so that hazing is less likely to occur. What works best is when a campus such as Cornell University sends a clear message through a task force and/or administration crackdowns that hazing will not be tolerated in any organization, and backs that notion up by suspending even high-status groups, including the Big Red men's lacrosse team and a number of fraternities. "Prevention, intervention and response efforts need to match the problem in order to be effective," stresses Novak.

The dynamics of hazing in a fraternity of 10 can and do differ from an athletic club or team, making one-stop prevention difficult. For example, while college fraternities often haze during an entire pledging period, many sports teams do their worst in a single night of "party" events in which drunken rookies become the night's entertainment.

"I also believe the implementation of well-designed bystander education programs for athletes has promise," says Novak. Bystander education encourages those witnessing a hazing who are against it for whatever reason to band together to curb more-enthusiastic proponents of the practice.

'ACCEPTABLE' HAZING
Novak argues that all forms of hazing need to be weeded out, and that coaches should not wink at so-called benign practices such as dressing rookies in outlandish costumes or mandating distasteful haircuts for newcomers. A high school or college sports program stands a better chance of preventing egregious and dangerous acts if it stops the less-violent behaviors that often precede them. She stresses that each hazing incident offers administrators the crucial process of deducing why something happened, not just what happened, to prevent the kind of culture that allows an otherwise respected school to experience a sports-club tragedy and near-fatality.

"I believe any incident of hazing merits attention, not just those that end in the tragic loss of life or in near death," says Novak. "While the death of a student is newsworthy and merits attention, in order to reinforce that hazing is not acceptable in any form, we must also talk about those behaviors that cause damage to teams and team members in other ways. Students will say to me, 'No one is going to die from this,' and while that may be true, research shows us that harm is still done.

"Once a culture is set that any hazing is okay, then the power to progress to more-violent acts is heightened. The in-for-a-penny, in-for-a-pound phenomenon that some researchers have identified when studying hazing is very real," Novak concludes.

Psychologist Susan Lipkins, author of the book Preventing Hazing, recognizes that hazing from high school athletics on up to professional sports is so common that it will take the kind of paradigm shifts that saw drunken driving, date rape and homophobia no longer be tolerated by society. Several attempts to introduce federal legislation against hazing have failed, but activists and experts continue to lobby nonetheless.

"Hazing deaths and injury will abate when the culture changes," says Lipkins. "The history of social changes, such as segregation, gay rights, etc., have changed after federal laws were enacted and enforced. I believe that similar events may be necessary in order to get all institutions and individuals to be responsible about hazing."

NCAA assistant director of education outreach Mary Wilfert, who has been instrumental in creating hazing awareness programs, agrees. The federal government has mandated that allegations of hazing-related sexual assault and sodomy among high school and college sports teams be tracked along with all campus sexual assaults. Wilfert is hopeful that attention to sexual assault gained through the Campus SaVE Act, which focuses on awareness education, bystander intervention and response, will impact coaches and student-athletes.

GLARING WEAKNESS
Of course, even after strong federal laws were enacted, they did not necessarily end racial discrimination or anti-gay attitudes, but at least there were places victims could turn to for legal support. One of the more unfortunate outcomes of athletic hazing is that the victim is viewed as a weakling for failing to measure up to the status quo by enduring the hazing that all or most veterans have experienced.

Time and time again, the hazing victim quits a team and in many cases, moves to another school to get a fresh start. Case in point, a whistle-blowing athlete on Franklin & Marshall's then-powerhouse women's lacrosse team quit the sport in 2012 and then transferred schools when a so-called "Freshman Fun Night" resulted in the firing of coaches, punishments for senior players, and ultimate suspension of the season.

The nation saw fallout on an even more dramatic scale in 2013 with the controversial hazing and harassment allegation made by then-second-year Miami Dolphins second-year player Jonathan Martin against teammate Richie Incognito. Since an independent NFL inquiry confirmed that the harassment against Martin and two other veterans also included charges of racially derogatory speech, Incognito sat out the season and was eventually released by the Dolphins.

"I believe the Incognito case is the most important hazing case," says Lipkins, who believes that hazing in professional sports sends a highly misguided message to high school and college students that hazing is somehow acceptable as a rite of passage in spite of its often demeaning and dangerous extremes. Lipkins hopes the NFL will follow up on the Martin-Incognito affair by pushing teams to set limits for veterans this season.

"If the NFL and its players chose to create a comprehensive hazing prevention program, it is possible that they could change the face of hazing as we know it," Lipkins says. "The NFL has so much power in terms of the behaviors and emotions of millions of fans that I believe it could use its power in a pro-social way with guidance from appropriate experts."

Five rugby players from Western Illinois University stand charged with hazing and providing alcohol to minors, with more arrests imminent as of this writing. While medical personnel saved the affected WIU rugby player, former WIU lacrosse club member Nick Haben wasn't as fortunate. Twenty-four years ago, he died after passing out following forced station-to-station drinking. His mother Alice fought successfully to get harsher hazing legislation passed, and that same law is what lead to the current charges against the WIU rugby players.

Haben at the time lobbied against tremendous odds to get a then weak and probably unenforceable Illinois law strengthened, yet today most of the hazing laws in the 44 states that have them serve as little deterrent. A recent fraternity hazing death in Virginia saw the offenders get off with $1,000 in fines and no jail time. Even in Florida, with the most jail time for a hazing death allowable by state law, most of the defendants in the beating death of Florida A&M University marching band member Robert Champion have plea-bargained for little or no jail time, causing the parents of Champion to complain loudly in media interviews. To date, only one FAMU perpetrator received even a one-year sentence, although another violated parole and received a four-year sentence as a result. Five band members were scheduled to stand trail beginning June 24 unless they, too, accept a plea bargain.

Haben's stated goal for her anti-hazing crusade was that no other mother's son should be lost due to bizarre but common initiations that harken to medieval universities in Europe. Yet, Alice Haben has long retired as an activist with her dream unrealized.

Hank Nuwer is a professor at Franklin College in Indiana, author of four scholarly books, and a frequently cited expert on hazing.

This article originally appeared in the July 2014 issue of Athletic Business under the headline, "Taking a Stand."