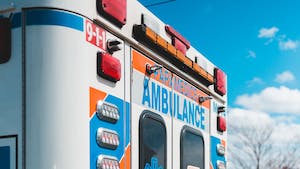 A youth wrestling coach has confirmed that his team was exposed to carbon monoxide while staying at a Marysville hotel Saturday night.

Police confirmed that 14 people were hospitalized, including six children.

Nick Holmes, a wrestling coach with Teay’s Valley Youth Wrestling program, told the local CBS affiliate that of the 14 people who were hospitalized, four were parents and three were wrestlers. Holmes said that all of them have now been released from the hospital.

"I think God was watching because I don't know how those people got pulled out when they did,” he said. Holmes said the youth program was competing in a youth league at Benjamin Logan High School in Bellefontaine.

Holmes said his team picked a hotel with a pool so they could swim, have dinner out and then get up for their meet the following day.

Holmes was on his way to the hotel when he started getting messages about what was happening. A 2-year-old fell unconscious after being exposed to life-threatening levels of carbon monoxide in the pool area.

Teay’s Valley dedicated every match to those who were injured, and they ended up winning the tournament.