Are Performance-Enhancement Centers the Next Big Thing for Young Athletes? 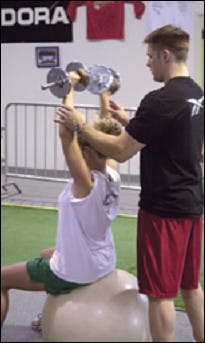 Matt McKay anticipated a much greater backlash than he actually received upon opening Going Vertical in 1998, a performance enhancement training center in Omaha, Neb., with an emphasis on attracting high school student-athletes. "Our first marketing goal was to get high school coaches and athletic directors on our side. We complement what they're doing at the schools," says McKay, who invites area teams to the 15,000-square-foot facility he shares with an indoor soccer complex for free speed and agility performance tests.

Today, in addition to its Omaha facility, Going Vertical has licensed locations in Portland, Ore.; Windsor, Colo.; and Alton, Ill. Up to 800 athletes a year train at the Omaha site alone, including professional and collegiate players. But the majority of McKay's clientele are middle school and high school student-athletes who - for a price - are privy to expert trainers and expensive equipment.

"We were greeted with healthy skepticism, which I think is very prudent on the part of athletic directors and coaches. They do a great job. They're out there on a daily basis," says Loren Seagrave, founder and self-proclaimed "chief performance officer" of Velocity Sports Performance, a four-year-old Alpharetta, Ga.-based franchise targeting athletes between the ages of 8 and 20. "But we're able to work with a young athlete and fast-track him or her with small-group training. We provide support. We're not trying to usurp the high school coaches' responsibilities."

Welcome to a new era in the old practice of specialization - a business niche on the brink of booming, with everyone from ex-jocks to former marketing and advertising execs to health club owners looking for a piece of the franchising and licensing action. Even though the majority of high school-age participants at Going Vertical and Velocity are two-sport athletes, they're making a commitment above and beyond that of their teammates by doling out several hundred dollars a year to enroll in these kinds of programs.

Seagrave, however, disputes the specialization tag. "The beauty of this program is that we're not going to teach you how to hit a rocket fastball or a power serve," he says. "The buzzword right now is 'sport-specific' training. That word always leaves a ringing in my ears. You have to get through the fundamental training to get to sport-specific training."

Frank Kovaleski agrees. "Having the outside opportunity to be coached or trained by somebody with experience is a positive thing," says the director of the National Interscholastic Athletic Administrators Association. "The danger is in the motivation. Who's pushing it? Parents are much more aggressive than they used to be about these kinds of things, but this needs to be an individual student-athlete's choice."

Seagrave contends that the young athletes who work out at his facilities do so because they want to, not because their parents enroll them in the hopes that they'll secure a full-ride college athletic scholarship. "Initially, we thought we were going to have to deal with a lot of Little League-type parents," he says. "But that has not been the case. Occasionally, we may have to sit parents down - particularly dads - and ask them about the direction in which they'd like their children to go. And depending on how they answer, we sometimes have to say, 'Gosh, we're not the program for you.' "

The program at Velocity (or at any other training center, for that matter) isn't a program for everybody, anyway. "We've had many a professional athlete literally sit in a corner and sweat, unable to complete a session," Seagrave recalls, adding that his high school clients range from couch potatoes who decide they want to be a varsity athlete by their junior year to first-stringers who want to be team captains and one day compete in college athletics.

While both Velocity and Going Vertical are in the process of expanding - Velocity is expected to have dozens of franchises open by year's end; Going Vertical hopes to license five new centers annually - the roots of the licensed or franchised performance-training movement at the high school level can be traced back to at least 1990. That's when Frappier Accelerated ® Sports Training opened its doors in Fargo, N.D. More than 85,000 athletes (most of them at the middle- and high-school level) in at least 106 licensed facilities throughout the world have completed at least one level of Frappier Accelerated's program, which is based on the ongoing research of exercise physiologist and company president John Frappier.

Frappier Accelerated stresses interval training designed to improve speed and power, while Going Vertical emphasizes agility and Velocity focuses on speed. Those philosophical differences are reflected in the kinds of training sessions each company offers and the prices it charges, which vary based on facility locations.

At Frappier Accelerated, for example, clients participate in high-intensity exercises using treadmills or plyometrics, along with some weights and resistance bands, interspersed with rest periods. All equipment is exclusively designed and patented. Typical cost: $395 to $495 for a six- to eight-week program of two or three weekly sessions.

Velocity runs its participants through a 90-minute workout (60 minutes if they're under 12 years old) divided into three parts: an active warm-up involving bodyweight squats, lunges, skipping and leg raises; a series of acceleration and deceleration exercises; and strength, balance and stability training. Typical cost: $850 for the first 24 sessions.

There are also three elements to a Going Vertical session, but the full 60 minutes is limited to only one of the following areas: speed, involving a high-speed treadmill; agility, involving virtual-reality machines that allow users to control interactive video movements by using full-body aerobics; or plyometrics. Each session involves minimal or no weight training. Typical cost: $275 for the first 24 sessions.

"I've never really had to justify the price," McKay says. "It's something we're proud of, and we're not afraid to put a price on it. If people want to do this, they're going to find the money. Ten dollars or $15 an hour is not bad, when you consider that a personal trainer could charge $100 an hour."

If franchised and licensed performance enhancement training centers become a natural extension of the high school athletic experience, their success will largely depend on savvy marketing. Frappier Accelerated publishes its own magazine, Acceleration, which expounds on the company's theories and successes, and Velocity has developed a physical education curriculum based on its principles for use in private schools and the home-school market.

Plus, the very real prospect of working out next to NFL players like Ahman Green and Shannon Sharpe or NHL player Brett Hull can do a lot to boost a young athlete's confidence and self-esteem. "That's a real interesting dynamic reinforcing the concept that we help kids understand what it's like to train for a sport," Seagrave says. "It makes the dream more real."

Competition in the dream-making business could heat up soon, with lots of national media focusing on this field. Entrepreneur magazine even named Going Vertical as one of the "top businesses to start now." Some of Going Vertical's locations are in health clubs and hospitals. Other companies have freestanding facilities.

"What we're banking on is that people will think this is a fun business to get into," McKay says. Seagrave's got high expectations, too. "We want to be to performance training what Starbucks is to coffee," he says.