Quinton Won Its Case, But the Effects of Product-Liability Law are Wide-Ranging 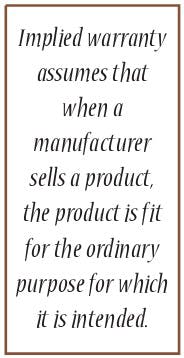 While most lawsuits in the sport and fitness industry result from alleged improper maintenance or supervision of facilities and equipment, people do occasionally get injured through no fault of the facility owner or staff. An important (and frequently litigated) class of accidents results from defective or unreasonably dangerous products and equipment. Although not as common as negligence lawsuits, product-liability cases can have a significant impact on the sport and fitness industry.

There are three basic theories of recovery available under product-liability law: strict liability, negligence and breach of warranty. Strict liability, which is also referred to as liability without fault, holds that a manufacturer or supplier is liable for personal injuries or property damage if the product they supply is "unreasonably dangerous." The reason, typically, is that the manufacturer and supplier are in the best position to bear the expenses associated with defective products.

As a general rule, the courts will impose strict liability if the product in question subjects a person to an unreasonable risk of harm and it was feasible to design the product in a safer manner. To defeat a strict-liability claim, the manufacturer or supplier must demonstrate that the product's utility outweighs the risk of injury to the consumer - that the product, in other words, has been designed so that the risks are reduced to the greatest extent possible while retaining the product's inherent usefulness at an acceptable cost. In applying the risk-utility test, the courts have identified seven factors to be considered:

1. The magnitude and seriousness of the danger in using the product. 2. The likelihood of injury. 3. The obviousness of the danger. 4. The product's utility to the public and the individual user. 5. The technological and economic feasibility of a safer design. 6. The ability to avoid injury by use of instructions or warnings. 7. The ability to have avoided injury by careful use of the product.

The final theory of recovery, breach of warranty, is based on contract law and can be either an express or implied warranty. The courts will find an express warranty when the manufacturer or supplier makes specific statements about the quality and characteristics of the product. For example, if a helmet manufacturer advertises Helmet X as "the safest product on the market," when in fact Helmet X does not even meet minimum industry standards, that is a breach of an express warranty. An implied warranty, meanwhile, results simply from the selling of the product - the assumption being that when a manufacturer sells a product, the product is fit for the ordinary purpose for which it is intended.

An illustration of how product liability law can impact both the manufacturer and supplier of sport and fitness equipment is Wallach v. American Home Products Corporation d/b/a Quinton Fitness Equipment and the New York Health & Racquet Club [Case index #25642-97 (July 13, 2001)].

Daniel Wallach, who was interested in becoming a member of the New York Health & Racquet Club, met with the club's sales manager for a tour of the facility - after which, he was permitted to use the gym on a trial basis. Wallach, who had been running since 1984, both outdoors and on treadmills, began his workout on the Quinton ClubTrack 3.0 treadmill. The ClubTrack 3.0 is equipped with a front handrail (but no side handrails), and is operated by a control panel, attached to the front handrail, that allows the user to adjust the power, speed and grade. Although a number of the treadmills at NYH&R are equipped with both front and side handrails, Wallach started his workout on the Quinton treadmill because it happened to be available. After about 10 minutes of running on the treadmill, Wallach's left foot came down partially onto the treadmill's frame alongside the moving belt, causing him to lose his balance and fall off the back of the treadmill.

As a result of his injuries, Wallach filed a product-liability action in the Nassau County Supreme Court against the treadmill's manufacturer and the club that furnished the treadmill for his use. The lawsuit claimed that Quinton was subject to strict liability because the treadmill's design made it unreasonably dangerous. In particular, Wallach argued that the position of the front motor cover caused him to move farther back on the treadmill than he otherwise would have, and rendered the front handrail unreachable when he lost his balance. Wallach also argued that the treadmill was defective because it did not come with side handrails, thereby making it impossible for him to regain his balance and prevent his injuries. Additionally, Wallach alleged that Quinton was negligent because it had a duty to warn consumers of any potential dangers associated with the product. Wallach's final claim against Quinton alleged breach of implied warranty.

As for the club, Wallach claimed that it was not only strictly liable or negligent in furnishing the treadmill for his use, but that NYH&R was in breach of implied warranty, as well.

In reviewing Wallach's strict-liability claim, the court found that the electronic control panel on the ClubTrack 3.0 treadmill was mounted directly above the motor cover. The court also found that the placement of the control panel and the front handrail ensured that the user would be positioned in the center of the moving belt, thereby rendering the front handrail accessible at all times. In addition, the court found that if a user hit the motor cover while running, there were a number of options (such as altering the speed or adjusting his or her stride) available to address the situation.

As for Wallach's claim that the ClubTrack 3.0 was unreasonably dangerous because it lacked side handrails, the court found that while side handrails were available as an optional safety feature, they have not been required on treadmills since approximately 1975. In fact, the court found that there was no industry standard with regard to the use of side handrails. Additionally, the court noted that current standards under consideration by the American Society for Testing and Materials do not require the presence of side handrails where a front handrail is provided. The court also noted that the recognized human response time to a sudden and unanticipated event is 0.75 to one second. In three quarters of a second, traveling at his estimated speed, Wallach would have been thrown 8.025 feet before he could possibly have responded to his loss of balance. Thus, a side handrail would not have prevented his fall.

In rejecting Wallach's strict-liability claim, the court held that the treadmill's utility - it allows for cardiovascular exercise without exposure to the elements, traffic or unsafe surface conditions - outweighed the risk to the consumer. As for the product's risk, the court found that while there is always a risk that a runner could fall off a moving treadmill, Quinton minimized that risk by giving the user complete control of the speed, grade and stride at which they exercise. As for the feasibility of a safer design, the court found that the position of the control panel was designed to keep the user centered on the belt, and within easy reach of the front handrail. The court also found that there was no evidence that side handrails are safer than front handrails.

Having rejected the strict-liability claim, the court next examined Wallach's argument that Quinton was negligent because it failed to warn of the potential dangers associated with its product. In particular, Wallach argued that Quinton, as the product's manufacturer, had a duty to warn of dangers inherent in normal use of the product, as well as dangers resulting from foreseeable misuse of the product. The court, however, ruled that where dangers are open and obvious, the manufacturer has no duty to warn - because in such cases a warning would add nothing to the user's appreciation of the danger or to enhance the machine's safety, especially for an experienced treadmill user like Wallach.

Wallach's implied-warranty argument was also rejected, this time without much comment by the court, because the treadmill had been in use at NYH&R for five years. The statute of limitations in New York for a breach-of-warranty claim is four years.

As for Wallach's claims against the NYH&R, the court concluded that as an experienced runner and treadmill user, Wallach clearly assumed the risk of losing his balance following a misstep on the moving belt. The importance of this fact cannot be overstated. In Corrigan v. Musclemakers Inc. [258 AD2d 861, 686 N.Y.S.2d 143 (1999)], the New York Appellate Court held that a first-time treadmill user, left unattended without instructions, did not assume the risk of being ejected from treadmill.

Although the court in Wallach ruled in favor of Quinton and NYH&R, the case still demonstrates the potential impact of product-liability law. Since the courts have ruled that manufacturers are in the best position to absorb the cost of product-liability lawsuits, manufacturers need to build the cost of such suits into the cost of their products. This cost is not only passed on to the sport and fitness consumer in the form of higher product costs, but can also hinder the development of new products or lead to the disappearance of existing products. Trampolines, which were once common in schools and youth organizations, nearly became extinct because they increased organizations' liability exposure and decreased the financial reward for manufacturing them.

Finally, since product-liability laws are different in each jurisdiction or state, it is difficult for manufacturers to predict what one state might find unreasonably dangerous and how a given court will weigh certain evidence. In Wallach, the court seemed to give a lot of weight to the company's market research indicating that most users do not want side handrails because they impede quick and easy access to the ground in the event the user loses his or her balance. Clearly, the most vital question - Is the product unreasonably dangerous to consumers? - is not always the court's primary focus in deciding a product-liability case.