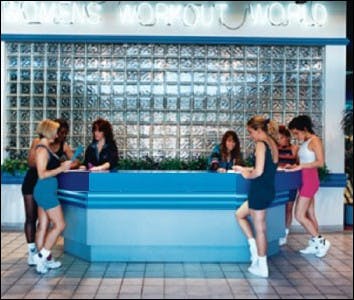 Julia Wheatley had no intention of owning a health club. In fact, it took the advice of a physician and the encouragement of a friend just to get her to join one. Once she did, however, she was hooked. Within 10 years, the out-of-shape mother with chest pains became a group-exercise instructor for and ultimately CEO of Women's Fitness Center Inc., a women-only club in Harrisonburg, Va.

Motivated by her own love of exercise and a strong belief in the women-only concept, Wheatley aggressively marketed the club, changed its logo, hired employees with degrees in exercise physiology, and personally tested new equipment. Eventually, the club's membership grew to 500, but that's where it peaked. Today, Women's Fitness Center claims roughly half as many members, but not necessarily because fewer women are working out. They just have more exercise options in Harrisonburg.

"The landscape has changed so dramatically since I bought my club" in May 1994, Wheatley says. "There are so many players in the marketplace now." In addition to an existing hospital wellness center and a coed health club, fitness facilities have since taken shape at three area universities and several local retirement communities, and those convenient, often state-of-the-art facilities have tapped into Wheatley's market share. So has the emergence of several women-only health clubs in neighboring communities. "We've taken a pretty big hit," she says.

The women-only health club landscape, on solid ground for more than two decades, is changing, too. International chains such as Curves for Women and Lady of America have emphasized the simplicity of 30-minute circuit training, while regional enterprises such as Women's Workout World (Illinois and Indiana) and New Fitness for Ladies (Virginia) offer a wider range of amenities and services, which may include nutritional guidance, child care and even nail salons. At least one women-only club, The Firm, now pitches workout videos and other products during 30-minute TV infomercials.

In addition, some equipment manufacturers have designed strength training machines specifically for women, with slightly smaller dimensions and lighter weights, to maximize exercise benefits and reduce injury risk. Pro*Fit Enterprises markets a series of hydraulic resistance equipment, called PACE, to clubs seeking to offer 30-minute circuits for women, while Australian manufacturer Fitness Technology offers its own hydraulic line. According to the International Health, Racquet & Sportsclub Association, which tracks the $12 billion fitness industry, 15 percent of coed clubs now dedicate a percentage of workout space specifically for women-only use. Combined, women-only clubs and clubs with women-only components may number around 6,500, more than triple that of five years ago.

Why the boom? Women, who currently comprise 52 percent of all health club members, represent a crucial market demographic. And a self-conscious one, at that. The primary reason operators of women-only clubs give for their facility's existence, if not its success, is that many women - even those who are fit - value their privacy when working out. "I am not intimidated by the guys out here, but I can relate to how other women feel," says Joanne Mueller, fitness consultant at World GymCitrus Heights in Sacramento, Calif., which reserves 2,000 of its 23,000 square feet for a women-only workout room. "I'll ask the ladies, 'Do you feel comfortable working outside on the big floor, or do you prefer to go into the ladies' area?' Some prefer just to be in the ladies' area."

Aside from walls, little else separates the women-only area at World GymCitrus Heights from the rest of the club. The same color schemes appear there, as do the same types of equipment. "A little bit of everything is in there," says business manager Terry Griff. "We just have a lot more of it on the big floor." A new amenity adjacent to the women-only area is a child-care room, which is visible through a glass panel in the door that links the spaces. "Moms can look from the ladies' workout area through to the day care and see their kids," Mueller says. "They love that."

Griff says that her World Gym location added the women-only space to "keep pace" with other coed clubs. But even women-only clubs have to learn to adapt to fitness trends, says Tami Lewis, director of marketing for Women's Workout World, which boasts 13 facilities averaging 13,000 square feet in the Chicagoland area. Founded in 1982 with an emphasis on aerobics, the club originally offered 90 such classes a week. Ten years later, unstructured individual workouts on cardio machines gained in popularity among time-strapped members. Five years after that, the club witnessed an industry-wide surge in women's strength training and again added equipment accordingly. "You have to change with the times and give your members what they're looking for," Lewis says.

To that end, Women's Workout World recently changed its lump-sum payment plan to include a monthly dues option. With $49 down, and monthly payments of either $17 or $22 (the latter providing access to all locations and a special renewal rate), Griff is confident her club is positioned perfectly within the local marketplace, which includes coed clubs at twice the membership price. "Women tend to put their kids, husband and family first and themselves last," she says. "If they do undertake a health and fitness program, they're going to look to a women-only club that is affordable."

Of course, there are exceptions - married women who treat trips to coed clubs as family outings, and single women who view visits to coed clubs as chances to meet and socialize with members of the opposite sex. That said, Women's Workout World has witnessed record-setting sales this year, boosting the combined membership of all 13 clubs toward 50,000.

Additional signs of the women-only push are widespread. The Waco, Texas-based Curves for Women (which did not respond to AB's interview request) is now the third-fastest-growing franchise of any kind in the nation, according to Entrepreneur magazine, jumping eight slots from a year ago, and besting such heavyweights as McDonald's (ninth) and Holiday Inn (17th). In August, Lady of America Franchise Corp. of Fort Lauderdale, Fla., acquired the Atlanta-based Ladies Workout Express and its 88 women-only fitness centers, giving the parent company more than 500 women-only clubs in the United States, Canada, Mexico, South Africa and the United Kingdom. The company anticipates doubling that figure by 2005.

The women-only movement hasn't come without legal hurdles, however. Within the past five years, separate cases in Massachusetts and Pennsylvania have challenged the existence of clubs that, in the plaintiffs' view, discriminate against men. It's a view shared by none other than the National Organization for Women. Both challenges failed to break down the gender barrier or the decades-old notion that women have a legitimate privacy interest when working out. Several states now have laws stating as much. It should be noted, though, that the Massachusetts suit was dropped only after the targeted club, a Healthworks Fitness Center in Boston, agreed to supply the plaintiff with fitness equipment for his home.

Amid the successes of the women-only fitness movement has emerged some sniping between competing interests. The web site for It Figures!, an Owasso, Okla.-based women-only chain founded in the mid-'90s, calls its top (albeit unnamed) competitor in the women-only hydraulic circuit-training market "the Wal-Mart of fitness." Lewis believes that while some major franchisors might be quite successful from a franchise-sales perspective, that doesn't guarantee the success of each franchisee. "We get calls all the time from people who are interested in purchasing a Women's Workout World club, but just because you have a hobby and an interest does not necessarily make you a strong businessperson," she says.

Wheatley, who benefited from three onsite visits by a business consultant after taking over Women's Fitness Center, has been careful to create a female-friendly environment in her 5,250-square-foot club. Instead of purchasing equipment designed specifically for women, she selected each piece based on whether it featured such attributes as good lumbar support, easily adjustable seats and weight stacks featuring 5-pound vs. 10pound increments. A fan of group cycling herself, she determined that most of her members preferred elliptical machines, treadmills and recumbent bikes to upright bikes for their cardio workouts. Whereas a lot of leg-curl machines force the user to exercise face down in a prone position, Wheatley's choice is a seated leg-curl unit. "I don't want my members skipping their hamstring work because it's an uncomfortable machine," she says.

Still, despite her best intentions, business mistakes were made. Wheatley finally gave up on a child-care center long after the costs of running one outweighed demand. "It's one of those things where I definitely let my decision-making be ruled by my heart instead of my head," she says.

Wheatley admits there are times she thinks about working in a different club, without the weight of ownership on her shoulders. But whether her own club rebounds or not will have no bearing on her belief in the concept on which it was founded some 20 years ago. "There will always be a niche for women-only clubs," she says. "If they didn't have the choice of a single-gender facility, many women who have come through our door wouldn't work out at all."