'Fit to Fight' Takes Off

A new fitness regime for the U.S. Air Force 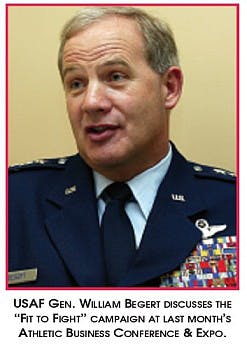 Whether it is their job to fly patrol missions over the Atlantic seaboard or to repair runways at bases throughout Southwest Asia, it's expected that the men and women charged with protecting America's skies be highly trained professionals. Beginning Jan. 1, the nearly 750,000 members of the United States Air Force will also be expected to be fit, in accordance with the branch's new fitness campaign.

"Fit to Fight" outlines for the Air Force a new system of fitness testing in which each airman and airwoman will be evaluated annually in four major components: crunches, push-ups, an abdominal circumference measurement and a 1.5-mile timed run. (Those medically unable to run will take a bike test instead.) The component scores will be added together for a composite fitness score, and will determine if the person falls into the "excellent," "good," "marginal" or "poor" categories.

On the surface, the Air Force's new fitness standard may not appear all that revolutionary, but according to an October directive from Air Force Chief of Staff Gen. John Jumper, it has serious implications. He expects "Fit to Fight" to not only better prepare airmen and airwomen to "deploy and fight," but also change the Air Force's culture. And Jumper is counting on that change to come from the top - "commanders, supervisors and front-line leaders," he said, "must lead the way."

Gen. William Begert is doing his best to heed the call. As commander of the Pacific Air Forces (PACAF), Begert oversees approximately 45,000 military and civilian personnel serving in nine major locations and numerous smaller facilities across the Pacific Ocean, primarily in Hawaii, Alaska, Japan, Guam and South Korea. "The number-one priority for my command is readiness - to fight and to do what the nation asks us to," he says. "Readiness has a whole bunch of components: it's having great airplanes, great munitions and spare parts. But fitness is also part of readiness. We've tried to encourage fitness and healthy lifestyles, and provide our people with the best facilities and programs we can."

This has included outfitting each of PACAF's nine fitness centers with state-of-the-art fitness equipment and FitLinxx ™ , a member-motivation software program that allows exercisers to record individual workouts and log their progress over a period of time. PACAF fitness center staff members are using the software to encourage airmen and airwomen to visit the facilities and develop fitness programs on their own. "We've spent an awful lot of money on a variety of equipment to meet people's needs," says Begert. "We think we have some of the best-equipped facilities in the Air Force, and probably the nation. We want people to look forward to coming to the fitness center because they'll know they're going to get the best possible experience when they come through the doors."

Air Force personnel have available to them plenty of support outside the fitness center, as well. In addition to regularly scheduled physical-training regimens, PACAF squadron commanders are taking it upon themselves to organize on their bases friendly competitions such as fun runs. "We have good commanders out there who are taking some initiative and doing some innovative things to make it interesting and enjoyable for their people," says Begert. "We've encouraged them to try to make this a teambuilding effort that increases morale."

When he first heard about "Fit to Fight" last July, Begert saw it as an opportunity to improve his own morale. "I have a bad knee, and I was facing an operation. I decided that before I went under the knife, I was going to see if I could take some weight off my knee," he says. "I was in pretty good shape, but I was heavier than I wanted to be. So my wife and I went on a diet. She has lost 25 pounds, I've lost 22. My goal is to lose as much as another 20 pounds and see what it does for my knee."

Peer motivation helped the Begerts establish their routine of early-morning visits to the fitness center at Hickam AFB, Hawaii, PACAF's headquarters. The general hopes that as the "Fit to Fight" campaign gains momentum these next few months, other Air Force members and their families will also be compelled to utilize the branch's resources to get fit together. "We have the capability to provide people the full dimension of fitness, including injury rehabilitation, smoking cessation, and diet and nutrition. It's all available to them on the Air Force base so they don't have to go anywhere else," says Begert. "There are a thousand excuses why people can't go to the fitness center - 'I work long hours,' 'It's hard to fit it into my day' - yada, yada, yada. If I can be there at 5 o'clock in the morning, so can they."