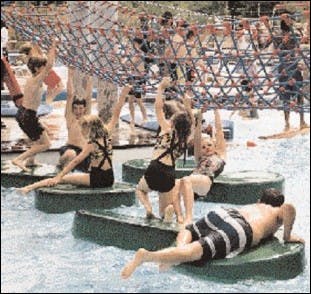 From conception to completion, the process of building a facility is often time-consuming. In the military, the timeline is stretched even further by government red tape.

Throughout the past decade, the military has undergone significant downsizing that not only reduced the number of enlisted soldiers, but led to the closing of numerous bases. Also, the tax dollars that were once used for the construction of military sports facilities are tighter than ever. Installations must now pay for such projects with non-appropriated funds such as revenue generated from the club system (bowling, golf and similar on-base business activities). Even military-wide, these funds are not quick to come by.

Several Army installations, including Oklahoma's Fort Sill, Texas' Fort Hood and Fort Bliss, and Kentucky's Fort Campbell and Fort Knox, are combating these problems by opening their facilities to the general public. What this offers the base is a chance to bring in its own revenues, which can be put directly back into the programs. It also allows for filling any excess capacity created by the downsizing movement.

Fort Knox began sharing its facilities with the public about two years ago. On a request from the state, and in cooperation with the neighboring city of Radcliff, the base offered its club facilities for use as convention space. The various groups that came to Fort Knox under this agreement often expressed interest in the base sports facilities. Soon special events, such as golf and bowling tournaments, were being arranged to coincide with the conventions. As a natural outgrowth of that venture, the base's two 18-hole golf courses were later opened to the general public.

When the base was preparing a Memorial Day, 1997, opening for its new waterpark - part of a $4.4 million project that also included a new aquatic center - Knox officials saw another chance to open their doors. Because the base had lost somewhere between 6,000 and 7,000 troops from the time the project was approved to the actual completion, they were concerned that the current onbase population of approximately 25,000 would not provide enough users to make a worthwhile return on their investment. By adding the population of the surrounding communities to the potential customer base, they hoped to attract an average of 300 people a day to the park.

"When you lose that many soldiers, you're bound to have excess capacity," says Mike Mooney, the director of marketing, sponsorship and advertising for the Fort Knox Directorate of Business Operations. "Given that, we could either keep the facilities for the soldiers and charge them an arm and a leg, or we could seek out new customers."

Looking to create a partnership arrangement with the outside communities, Fort Knox officials went to the local chambers of commerce for permission to open up the facilities to civilians.

"We wanted them to know we're not trying to take away from what they have, we're trying to augment it," Mooney says. As owners of the area's sole waterpark and only the second Olympic-size pool in the state of Kentucky, the base was presenting to the off-base population brand-new recreational opportunities, not a competitive facility.

"We have nice facilities in Radcliff, but we don't have enough of them. So having the base facilities available is a real asset to us," says Rhonda Witten, Radcliff's parks and recreation director, adding that Fort Knox, Radcliff and the nearby communities of Elizabethtown and Vine Grove are fortunate to have a good working relationship with one another. "I don't think any of the communities view this as competition. Actually, it's a good example of how we support each other's programs."

With the community support, the waterpark surpassed its goal and brought in roughly 800 people a day this past summer. The success of the waterpark is good news to Fort Knox's sports and fitness coordinator, Mark Wicker, who is anxiously awaiting the completion of another new facility, the fate of which will rest on its ability to bring in money from off-base sources. The $4.6 million outdoor sports complex, which is set to open for the 1999 spring season, has been in the works for five years. Designed to accommodate a variety of revenue-producing activities, including league and tournament play, the new facility will consist of batting cages, a one-mile running track and two four-field areas, each with three softball fields, one combination soccer and football field, and a control building with rest rooms, office space, scorekeeping areas and concessions. New lighting, irrigation systems and scoreboards will also be installed.

"The complex will offer this area something that it never had access to before," says Mooney, an Amateur Softball Association umpire. "With six softball fields all within walking distance of each other, you could do the first round of a 132-team, double-elimination, slowpitch tournament in one night."

None of the base's existing fields are adequate to host a regulation game, much less a tournament of any kind. Among the 18 mismatched fields in use, which are scattered across 172,000 acres, are converted exercise fields that sit back-to-back in such a way that when a softball is hit over the fence, it lands in the infield of another game. The others are converted football fields with very short right fields and old post baseball diamonds with outfields too large for softball play.

So while this new sports complex will bring in the needed revenue and pump more money into the Fort Knox-area economy, it will also breathe new life into a long-suffering intramural program. It is also hoped that the complex will generate more interest in recreation and base activities among military and civilian youth and families.

"The design centers around a mall area where people can gather to socialize or maybe have a picnic. There will also be a play area for kids," says Wicker. "We hope with all the options we're making available, this will be a place where all types of people will want to play, and stay, whether or not they're participating in sports."

Family and youth are also the focus of the base's bowling alley renovation, currently underway. The new "family fun center" will offer 18 lanes of "cosmic bowling," a giant video arcade and a "cosmic cafe."

While a lot of the energy at Fort Knox is being focused on making money and attracting non-military customers to the sports facilities, no one has forgotten why this movement first began.

"Our primary purpose is to take care of the soldiers and protect their programs," Mooney says. "Everything we're doing is geared toward improving their quality of life."