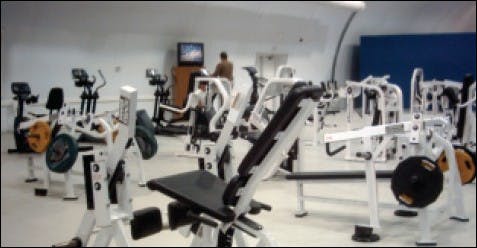 Oppressive heat. Ubiquitous sand. Constant threat of attack by insurgents. U.S. ground troops have had to endure much during their ongoing mission to help secure a lasting representative government in Iraq. The toll on the military's collective mind and body is not something that shows up in daily casualty statistics.

However, the U.S. Army, which serves as executive agent in the theater, has done as much as environmental and tactical conditions will allow to combat the physical and psychological challenges facing its own soldiers, as well as U.S. Marines, camped throughout the harsh Iraqi landscape. "One of the first things they want after the bullets stop flying - after hot meals, hot showers and a comfortable place to sleep - is communication with home, so we set up Internet cafés," says Paul Rohler, a civilian program analyst with U.S. Army Morale, Wellness and Recreation. "Then they want access to fitness equipment."

Providing access to fitness equipment in a desert 6,000 miles from home is a logistical challenge in its own right. Not only are many fitness equipment pieces heavy and cumbersome, dictating that they be shipped rather than flown, they must also be trucked into camps, unloaded by troops and manned and maintained by contractors. According to Rohler, established standards for the theater dictate that camps housing 500 or more troops, as well as those housing a permanent population, receive recreation support in the form of fitness and other equipment. (In the interest of efficiency, footballs, volleyballs and the like are delivered inside 150-quart coolers that troops then use to ice down "whatever liquid they can get their hands on," Rohler says.)

Some types of fitness equipment can't be deployed at all, regardless of camp size or permanence. Selectorized machines, with their multiple moving parts, don't stand up to the punishing sandstorms that are all-too-common in the region. Instead, freeweight equipment options - including dumbbells and plate-loaded equipment; horizontal, incline and decline benches; and preacher-curl, pull-up and dip stations - fare much better.

Cardiovascular equipment pieces, including stair steppers, elliptical machines and stationary bikes, also have been recruited for duty in Iraq, though their endurance is compromised greatly by conditions. "If the manufacturer says that it's good for 100,000 miles, we figure it's probably going to be shot at 50,000, because of the physical environment," Rohler says.

Actually using the equipment is another matter. When daily high temperatures top out at 120 degrees, few soldiers can bear to work out in a tented gym that lacks air conditioning. Moreover, certain tents don't sufficiently protect the equipment from sand intrusion. That said, some U.S. posts are better suited to establishing workout space than others. Abandoned Iraqi Air Force bases, for example, often include gymnasiums, or at least permanent structures that lend themselves to gym conversion. "I saw a couple of places where they had Olympic-size swimming pools and outdoor track-and-field stadiums at these bases," says Rohler, who last visited Iraq in July 2003. "In other places that are going to be enduring camps, meaning they're going to be there for awhile, they might pour a concrete pad and put up a 'sprung facility,' which is basically a huge pop-up tent that's sturdier, provides better protection against the environment and can be air-conditioned. Or they might put in a SEA [Southeast Asia] hut, which is a prefab building that can be taken down and transported when it's time to leave."

But even in permanent or semi-permanent structures, sand is still an issue. Whenever a door is opened, troops carry with them a fine, talcum-like powder. "Basically, every time a person works out on a piece of equipment - if they haven't changed their clothes - it's like rubbing sandpaper back and forth across the surface," Rohler says.

Treadmills - which, at the operation's outset two years ago, weren't expected to last three weeks in the field (if electricity was even available to power them) - are now being custom-ordered with smaller footprints and dust-filtration features, but for only the most permanent troop locations, according to Rohler. "With what's going on over there, beans and bullets take priority over replacement parts for treadmills," he says.

But treadmills represent the one fitness luxury Marines stationed on the ground miss most, says Marine Capt. Corrianne Thornton, who returned from Iraq in May after serving more than eight months spanning two separate tours. "Marines are running-centric from basic training on, so we would have liked to have seen more treadmills," Thornton says. "But Marines are trained to take what they're given and make the best of it. You'll never hear a Marine complain."

Other recreational diversions are more sedentary, but no less important. Visual entertainment options - from video games to board games, movies to magazines - are packaged in the States for shipment overseas. Contractors here are instructed by the Army to pack whatever games happen to be the most popular at the time (think "Madden 2005"), along with TV monitors, game consoles and controllers in custom-built, airtight cases.

Likewise, whatever new DVD releases occupy the top-10 list of domestic rentals are included in "Theater In A Box" packages, along with a projection unit, speakers, cables and an 11-by-7-foot screen suitable for viewing by up to 250 troops.

In addition, Armed Forces Entertainment, a Department of Defense agency, books standup comedians and American bands (typically mainstays of the stateside bar circuit) to perform live shows for Iraq-based troops. Four such bands rotated from camp to camp over a weeklong period surrounding the Fourth of July, Rohler says, adding that big-name acts such as Toby Keith have performed gratis through the USO. "We still have to pay for the logistics of getting their equipment and stages there, and we've got to take care of the performers once they're there," Rohler adds. "Granted, taking care of them means giving them a cot. Four-star accommodations are at a minimum in that part of the world."

Obviously, such events are staged only under agreeable weather conditions and the tightest security. The realities of war are never forgotten entirely, even for a few hours. "Depending on where you are, you have to worry about mortars coming in at night," Rohler says. "You don't want to have a large gathering in the same place all the time."

The presence of such stress underscores the importance of wellness and recreation to U.S. ground troops stationed in Iraq. Fitness training, in particular, serves a dual role. "Stress relief is a big part of it," Thornton says. "It was for me. You can take the frustrations of the day and run them out, or lift them out."

"For the average individual, it's about stress release. It's something to do for an hour with your buddies to forget about what's going on outside in your daily mission," adds Rohler. "As far as the chain of command is concerned, it's about maintaining a level of physical fitness. But commanders also know that when you're talking about the fitness of troops, you're not just talking about the physical side. Troops are also relieving that mental stress, which can be more detrimental to their mission than a lack of physical conditioning."