Assumption of risk applies not only to participants, but also to spectators and bystanders 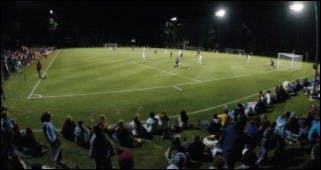 The issue of assumption of risk as it applies to participants has been well documented in these pages over the years. As recently as last June, this column noted in a discussion of a case involving high school softball players that, under the theory of assumption of risk, as long as a person 1) has knowledge of the risk of danger, 2) appreciates that risk, and 3) voluntarily exposes him or herself to it, either expressly or implicitly, then he or she cannot later sue for damages incurred from exposure to that risk.

In two recent cases, however, the courts have been asked whether the doctrine of assumption of risk applies not only to sports participants, but also to spectators and bystanders.

The first case, Sutton v. Eastern New York Youth Soccer Association [779 N.Y.S.2d 149 (2004)], involved a spectator, James Sutton, who had just finished watching his son play in a soccer tournament, when he was hit by a ball and injured. The incident occurred after Sutton walked past the end of the field to a tent some 30 to 40 yards behind the goal line. As he left the field area, Sutton noticed six or seven players from another team warming up for the next game. Once under the tent, as he was getting a sandwich out of a cooler, Sutton was struck in the chest and knocked off his feet by a soccer ball kicked from the field by one of the players warming up.

As a result of injuries he sustained to his knee, Sutton sued the sponsoring organizations and participating teams, as well as the boy who kicked the ball. In the lawsuit, Sutton argued that since he was not a voluntary spectator of the soccer match at the time that he was injured, he could not be found to have assumed the risk of injury. In support of this argument, Sutton pointed to the fact that a game was not in progress on the field and that, when injured, he was standing some 30 to 40 yards away from the field of play.

In rejecting his argument, the court ruled that the doctrine of assumption of risk applies not only to participants in sporting events, but to spectators and bystanders who are not actively engaged in watching the event at the time of their injury. Citing Akins v. Glens Falls City School Dist. [53 N.Y.2d 325, 329, 424 N.E.2d 531, 441 N.Y.S.2d 644 (1981)], the court stated that "the spectator at a sporting event, no less than the participant, accepts the dangers that inhere in it so far as they are obvious and necessary, just as a fencer accepts the risk of a thrust by his antagonist or a spectator at a ball game the … chance of contact with the ball."

In support of its finding, the court noted that Sutton admitted he was aware that players were practicing on the field when he walked past them. In addition, Sutton's presence at the tournament rendered him a voluntary spectator to the soccer play in progress throughout the day.

Sutton also argued that by placing the tent behind the goal line of one of the fields, the organization enhanced the risk to spectators at the game, thereby undermining the assumption-of-risk argument.

In rejecting this argument, too, the court held that while a factual question had been presented - whether the risk of being struck by a soccer ball is enhanced when a spectator is standing behind the goal line - that question was immaterial to the disposition of this action. In particular, the court held that just as the owner of a baseball park is not responsible for the spectator who leaves his or her seat and walks through a potentially more hazardous zone to reach a rest room or concessions stand, the defendants could not be held responsible for the risk assumed by Sutton when he, aware that players were active on the field, left the sidelines and voluntarily stood in the tent positioned in the arguably more dangerous zone behind the goal line.

In the second case, Patton v. USA Rugby [381 Md. 627; 851 A.2d 566 (2004), Donald Patton died when he was struck by lightning after watching his son play in a rugby tournament in Annapolis, Md. The tournament, which involved more than two-dozen teams, started in the morning and was scheduled to continue throughout the day. At some point during the day, a thunderstorm passed through the area. Although the weather deteriorated and lighting flashed directly overhead, Patton continued to watch his son play until the match was stopped. Upon termination of the match, Patton and his son fled the playing fields to an area under trees where they had left their possessions. As they began to make their exit from under the trees to seek the safety of their car, Patton was struck by lightning and died.

As a result of his death, the Patton family sued the rugby tournament organizers, the referee and related organizations, alleging that the defendants failed to employ proper policies and procedures to protect players and spectators from lightning strikes.

In dismissing all claims, the trial court ruled that none of the defendants owed Donald Patton a duty of care as a matter of law. In support of this conclusion, the court noted that courts in other jurisdictions have generally found that landowners or their equivalent do not have a duty to warn invitees of the risk of lightning. In particular, the court noted that "the inherently unpredictable nature of weather and the patent dangerousness of lightning make it unreasonable to impose a duty upon [the defendants] to protect spectators from the type of injury that occurred here."

On appeal, the family argued that the tournament organizers had a duty to protect Donald from the dangers of viewing a sanctioned rugby match during a thunderstorm.

In finding that organizers owed Patton no duty of care, the court held that for there to be a duty, there must be a "special relationship" between the organization and Patton. In order to establish this special relationship, there would have to have been both an element of dependence and the ceding of control by the injured party. Both elements, the court found, were absent in this case. In particular, the court found that there was no credible evidence that Patton had entrusted himself to the control and protection of the defendants. For example, the court noted that Patton was free to leave the tournament at any time. In addition, the court noted that the changing weather conditions were readily apparent to all competent adults, and that Patton could have sought shelter at any time he deemed it appropriate to do so. Therefore, the court concluded that it was unreasonable to impose a duty on the organizers of amateur outdoor events to warn spectators of a weather condition that everyone present is fully able to observe and react to on his or her own.

As these two cases demonstrate, as long as spectators have knowledge of the risk, appreciate the risk, and voluntarily expose themselves to the risk, the courts will generally find that they assume the risks associated with attending a sporting event. Also, while both of the above cases involved nonpaying spectators, it is important to note that the decisions would probably have been the same if the spectators had paid an admission fee. The courts have held that while facility operators may have a legal duty to provide fans with a safe environment, they do not guarantee fans' safety from all dangers associated with attending the event. This would be especially true regarding dangers that are known and voluntarily assumed.

As for cases dealing with the weather, as the Maryland court held, as long as there is no evidence that the tournament organizers created a greater hazard than brought about by natural causes, there is no duty to warn and protect spectators.