Whether designed to accommodate football practice, pickup basketball or both, indoor athletic facilities must always live up to their height. 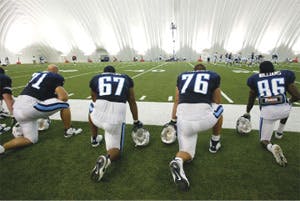 There is perhaps no less revered position on a college football team than that of the placekicker - often the last person honored for a team's accomplishments and the first blamed for its failures. And yet, it is the kicker who, for all intents and purposes, determines the design of the multimillion-dollar indoor facilities in which many college football teams train.

Such was the case at Iowa State University, which opened its Steve and Debbie Bergstrom Indoor Training Facility in April 2004. "The old adage - form follows function - really holds true with this particular project because the clearances were driven by the need for somebody to be able to kick a field goal," says Al Oberlander, a principal with Des Moines-based RDG Planning & Design, which designed the Bergstrom facility. "We worked very closely with the football coach to determine whether he wanted to be able to kick field goals in both directions or just one. It was acceptable to him to just drive the football in one direction. So between the hash marks, this particular project has 65 feet of clearance in the direction the team kicks field goals, which then let us drop one end of the building down so that it blends in with the surrounding context."

Generally speaking, long-span indoor athletic buildings such as football training facilities and field houses aren't known for exhibiting much sensitivity to their surroundings. Rather, by necessity they often seem to gobble up acres of land. But while campus planners may spend plenty of time fussing over the impact of such buildings' horizontal spatial requirements, just as much attention should be given to their vertical characteristics. After all, how truly multipurpose is a field house if the facility's ceiling height can accommodate competitions for basketball but not volleyball, or practices for soccer but not softball?

According to Tom Betti, a principal with St. Paul, Minn.-based Ankeny Kell Architects P.A., an indoor athletic facility can reasonably host at least four sports - basketball, soccer, lacrosse and hockey - if it boasts a minimum clearance of 25 feet from playing surface to ceiling. However, softball and baseball will push the ceiling height significantly higher. "So that you can do more than just infield practice, it's really nice if you can get up over 60 feet," says Betti. "That way, you can do some low pop-up practice with youths, especially first- and second-graders. With them, you don't need to hit the ball 200 feet in the air."

While sports like indoor baseball may require several thousand square feet of vertical clear space, others only need a little extra room. The United States Tennis Association, for example, specifies clear space of 30 feet at center court - a mandate that can easily be met in long, rectangular buildings by arranging courts in a side-by-side configuration. "A lot of fabric structures and metal buildings will have a peak right above the net because that's where you need to have the most height," notes Oberlander.

Competitive volleyball, on the other hand, raises the roof above the entire court. USA Volleyball's domestic competition regulations mandate a minimum of 23 feet of clear space from the playing surface, but in recent years the NCAA has increased its recommended clearance to 41 feet. "If it's a practice area for volleyball, you can still get by with a 25- or 30-foot clearance," says Oberlander. "If you want to hold some big events and tournaments, you need to have it higher."

At one time, minimum ceiling heights were generally dictated by local building codes. "The building codes said that if you had structural steel higher than 25 feet above the floor, you didn't need to have any fire protection on the court," says Oberlander. "So everybody would push the steel up to 25 feet and it was adequate for the activities that were going on inside."

Indeed, competition venues differ from practice and recreational facilities in the sense that over the years their ceilings have been raised at the behest of spectators and television audiences in search of better sightlines. While improving the spectating experience may have boosted some schools' gate receipts, it has sent building costs skyward, as well. According to Betti, there is an approximately 20 percent cost premium to increasing a facility's height by 20 feet. Once a facility's roof structure reaches above 32 or 34 feet, "the cost curve will swing up dramatically," he says.

Apart from costs related to constructing a taller building envelope, additional operational expenses can be incurred due to increased or varied demands on mechanical systems. For example, it's critical to continually circulate the immense volume of air within football training facilities - a task handled at Iowa State by giant, slow-turning propellers installed in each of the facility's end walls. However, there are strategies that operators of such facilities can use to mitigate their heating and cooling costs. "Most facilities for football practice are not air-conditioned," says Oberlander. "The buildings are heated in the northern climates, but only to about 55 degrees. Coaches are just trying to keep players out of the inclement weather and make it more comfortable than being outside in 32-degree weather."

For some, temporary fabric structures have proven to be the most economical and efficient means by which to make full use of outdoor fields and keep athletes and recreation enthusiasts protected from the wintry elements. On the other hand, permanent field houses are often challenged to simultaneously accommodate an intramural soccer match, a pickup basketball game and a track team practice - all the while keeping participants in those various activities in year-round, climate-controlled comfort.

Nevertheless, Betti anticipates that before long, athletic facilities will be able to successfully satisfy their need to both house multiple activities and achieve cost-efficiency. He wonders if standard, 25-foot-tall field houses could be equipped to accommodate sports that have traditionally required taller spaces. "Softball and baseball are always forced into batting cages or pitching stations because of those height limitations," Betti says, noting that some track and field athletes also are excluded quite often from field house use. "Javelins and discuses are always an issue. Throwers are just forced to go outside. The creative thing they're doing around here for golf driving ranges is building a heated hard shell, where you actually hit outside. I could see that being incorporated very easily into a field house. The shell could be heated and from there, you'd just let the javelin fly."