There Are Many Ways to Achieve the Benefits of Field Aeration

The benefits of field aeration are well understood, though there are many different ways to achieve them. 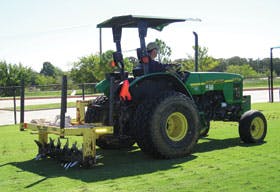 Of all the tenets of field maintenance, aeration may be the easiest to understand. Soils can become compacted through heavy use and in high heat, especially those with a high clay content, and thatch can develop in even the hardiest of turfgrasses. Aeration, the process of puncturing the surface of the soil, mitigates these problems by allowing oxygen to be introduced into the root zone, carbon dioxide to escape, and water and nutrients to more easily flow through the soil profile.

Sounds simple. Yet, how to get the best results, and which aeration equipment to purchase, are areas deserving of careful consideration.

Aerators for sports field applications are typically tractor-drawn units, with walk-behind aerators sometimes utilized in smaller applications. The simplest rely on the weight of the equipment to force tines into the soil, while more "aggressive" equipment uses mechanical or hydraulic means to drive the tines deeper. The most aggressive machines "shatter" the soil profile either by utilizing twisted tines or by moving tines in a heaving or vibrating action as well as up and down. Beyond that, tines can either be made of solid steel (which limits the disruption of the soil surface), or hollow-core or spoon-shaped steel (which pulls soil cores and deposits them on the surface). And since aeration of fields is often performed in concert with overseeding, some aeration equipment includes a seed box that allows both operations to take place simultaneously.

All of the different types of equipment have their adherents - and each of the equipment manufacturers have marketing budgets - making choosing between them sometimes difficult. Few studies have been performed that definitively answer equipment purchasing questions, although there are some basic truths out there:

The most basic truth about aeration is that an aeration program has to fit the field use. Second to that, according to Dave Minner, turfgrass specialist in the horticulture department of the Iowa State University Extension, is that all fields need to be aerated multiple times throughout the year (two to six times a year for game and practice fields), and often require multiple passes over the same area for maximum benefit. The reason is that more holes mean better compaction relief and better turf cover, since most new grass establishes within the aerator holes. In addition, many field maintenance specialists suggest the use of an aerator with heaving action just for this purpose, since the movement of the tines breaks up compacted soil between the holes.

The Iowa State Extension web site features a coring chart (turfgrass.hort.iastate.edu/extension/core.pdf) that spells out the particulars of various coring and topdressing programs, with variables taken into account such as the spacing and depth of aeration holes, and the diameter of the tines used. An accompanying article offers as an example a maintenance specialist's goal of removing 50 percent of a predominantly clay field to a depth of the aerator tine and replacing it with sand. "If you remove cores on 3-inch centers, it will require 22 passes over the field using 1/2-inch-diameter hollow tines in order to meet your goal," the article notes. "At two corings per year, this would require 11 years, and that might be too long to wait. By using 3/4-inch tines you can achieve the same goal in 10 passes over the field."

Why the focus on core aeration at the exclusion of all other aeration methods? Minner maintains that the differences between types of aerators is less important than the amount of time spent actually poking holes in your fields. Noting a University of Georgia study that ranked an oscillating solid-tine aeration machine number one in compaction relief in the top 5 inches of soil, Minner says, "I don't subscribe to much of that. There are a lot of effective pieces of equipment out there, but most people try to pick a strategy that fits their budget. I think everybody would agree if they're given an opportunity to purchase one piece of equipment and they can afford the top of the line, they'll buy a good hollow-tine aerator, because it's the most versatile."