A tax exemption offered to Ohio's nonprofit fitness centers draws fire from just about everybody. 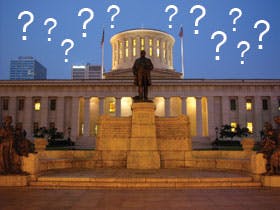 In today's installment of "Your Government at Work," we offer up a bill, apparently introduced to the Ohio Legislature by accident, which doesn't jibe with the stated rationale of the legislator who introduced it. But before you shake your head - or worse, throw up your hands and say you've given up on your elected officials for all time - know that this particular case has seen several positives emerge, including the potential repeal of a tax on fitness center memberships and nearly unprecedented public- and private-sector unanimity.

The head-shaking began in October with the news that Rep. William Batchelder (R-Medina) had introduced House Bill 324, which would exempt fitness facilities and recreation and sports clubs - but only those run by 501(c)(3) nonprofit corporations - from the state's 5.5 percent sales tax on membership fees. Batchelder's reasoning, as spelled out in an article in Columbus Business First, was that fitness facilities should not be taxed "at a time when Ohio is battling an obesity epidemic." Ohio's sales tax on fitness center memberships, which went into effect in 1993, "hits especially hard at nonprofit clubs that serve people with limited financial means," the magazine stated, adding of Batchelder, "That's why he decided to limit the exemption to nonprofit facilities rather than extend it to all health clubs."

There are many people on all sides of the issue who might have been receptive to such an argument - at least, one that was more logically sound. To begin with, Ohio's sales tax on fitness center memberships doesn't hit any fitness facilities especially hard, since it is the end users who pay it. Second, if the purpose of the exemption were to battle Ohio's obesity epidemic, why would it matter whether a person's membership was at a for-profit or a nonprofit fitness center? And third, the nonprofits were on record as saying the one-sided exemption was unfair. "We greatly appreciate that [Batchelder] wants to do this for nonprofits," John Bickley, CEO of the YMCA of Central Ohio, told Columbus Business First. "But my opinion is it's bad public policy to tax any healthy behavior - for-profits or nonprofits." If the Y wasn't pressing for this bill, then who was?

Geoff Dyer, CEO of St. Petersburg, Fla.-based Lifestyle Family Fitness, which operates nine for-profit facilities in central Ohio, greatly appreciated Bickley's stance. "I thought that was a very admirable comment," Dyer says. "It was nice to see a guy from the YMCA supporting what we were trying to say. It's the first time I've seen that happen."

"As you well know, IHRSA and the YMCA have not always gotten along," Bickley says, referencing the International Health, Racquet & Sportsclub Association. "But when you think of the ramifications of such a tax on our health-care system, and the effects on society and on business, it's clear that it's poor public policy. Our legislators should be doing everything they can to encourage good health."

Batchelder was not actually quoted in the Columbus Business First story (and neither Batchelder nor his legislative staff responded to AB's interview request), so one can only speculate about whether the criticism has hit close to home. It certainly couldn't have felt too good - especially since "he was acting in good faith," as Marti Sweterlich, legislative counsel for the Ohio Alliance of YMCAs, puts it. "We wouldn't want to embarrass Mr. Batchelder."

It was Sweterlich who, while misinformation and paranoia swirled around the local fitness industry, came forward with the piece of information that helped redeem the embattled legislator: The whole episode was the result of a simple mistake.

Ohio is one of 25 states that tax certain fitness center services. According to Amy Bantham, IHRSA's deputy director of government relations, whether a legislature deems it a sales tax, use tax, amusement tax or admission tax, "It really all comes down to the same thing: It's a tax on healthy lifestyles." In fact, though, not all these taxes target the ladies down at Curves. Some leave more-healthful membership and personal training fees alone but tax less-healthful services such as tanning or massage that are offered under the same roof.

Both Bickley and Dyer recall the 1992 passage of Ohio's sales tax the same way. "I don't think people paid much attention to it," Bickley says. "Health care had just moved into HMOs, costs had subsided a little bit, and I think people got kind of lulled to sleep." Says Dyer, "The Legislature piggybacked the tax bill on a sex education bill. No one saw it get passed, and we didn't have the ability to fight it at the time. We've been trying to undo it for the past 15 years, paying a lobbyist fifty grand a year to try to overturn it."

It is precisely those many attempts at overturning the tax that indirectly led to the introduction of HB 324.

Sweterlich says, "I'm told that the question was asked in a much earlier repeal deliberation back in the late 1990s, 'Why are we taxing the YMCA and groups of that nature,' and the response given was, 'No, they're tax-exempt so they won't be taxed,' which was totally bizarre because it's not a tax on the institution, it's a tax on the member. The result was that a bill was drafted that would exempt only memberships in the YMCA and other nonprofits, although it was never introduced." Fast-forward to 2007. Lobbyists for the YMCA and health clubs continued their push for repeal, and the clubs' chief lobbyist found, in Batchelder, a sympathetic ear.

"Well, if you've been lobbying the state government forever, you keep a file," Sweterlich says. "He apparently pulled the wrong document out and submitted it to Batchelder's office."

"Somebody wasn't paying attention," Sweterlich answers, adding, "We didn't ask for that bill."

Repeal is not an easy process, as Ohio's experience makes clear. "We have an excellent record of stopping sales taxes, because our case for not taxing the industry is so logical," says Helen Durkin, IHRSA's executive vice president of public policy. "But we have a horrible track record with repeals."

The reason, Dyer says, is twofold - legislators care too much, and consumers care too little. "We can't get support for repeal because once the revenue comes into the state coffers, they don't want to give it up," he says. "At the same time, there's not enough passion among consumers to get them to write to their representatives. It's too insignificant an amount on a $40 or $50 monthly payment for the members to really care."

IHRSA and its member clubs care - Durkin and others insist that, all other things being equal, consumers will let that 5.5 percent dictate whether they join a for-profit or nonprofit fitness center - and have made some headway. One recent success occurred in Michigan, where a coalition of industry lobbyists and facility owners defeated a use tax on health club dues - although the Michigan Legislature did decide to tax personal fitness training as well as certain personal care services such as massage and tanning.

Across the border, Rep. Batchelder is said to be interested in seeing a substitute bill drafted that would exempt all fitness center users from the sales tax. "And we'll all be on board with it, as we have been many times before," Sweterlich says. "Of course, there are no hearings scheduled yet, and it remains to be seen whether the general assembly or the governor will be willing to give up the revenue."

It also remains to be seen whether legislators are willing to back up their words with meaningful action. Perhaps it's just a coincidence, but Ohio is one of nine states where the tax applies to users of both for-profit and nonprofit fitness facilities - the others are Idaho, Nebraska, North Dakota, Oklahoma, South Carolina, Tennessee, Washington and West Virginia - and these are also among the worst in terms of the percentage of obese residents. "There does appear to be a disconnect," notes Bantham, between these states' wellness goals and their search for tax revenue.

"There's no state sales tax on cable television, so you can be a couch potato and watch all the spectator sports you want to, and you don't pay a tax," adds Sweterlich with a tone of exasperation. "But if you get off the couch to go participate, you have to pay a tax. It makes no sense."