A university professor and cancer survivor opens a fitness studio for people fighting the disease. 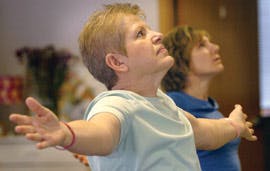 Tenured university professors typically stay university professors. They usually don't, for example, suddenly decide to spend their semester of research leave becoming the owner of a fitness studio. But a breast cancer diagnosis has a remarkable way of altering a person's life path, and Wendy Rahn's path has, without a doubt, been altered.

The 46-year-old University of Minnesota political science professor underwent a bilateral mastectomy in November 2006 and, spurred by research that showed that women who exercised after being diagnosed with breast or colon cancer cut their chance of dying from the disease by as much as one-half, began a regular workout regimen at the Balance for Life Fitness Center in Shoreview. The experience was more than personally gratifying; surprised by how much better she felt, Rahn became determined to get the message of fitness out to other cancer sufferers. In 2007, she founded Survivors' Training (survivorstraining.org), a nonprofit organization dedicated to promoting "regular physical activity as an essential therapy for those diagnosed with cancer." Next, concerned about the lack of workout options for this particular demographic, Rahn approached Julie Gronquist, the owner of Balance for Life, to ask whether either of the club's two facilities might be able to house a cancer-survivor wellness program. Gronquist upped the ante a little: She was planning to close her White Bear Lake location, and so she offered Rahn the opportunity to sublet the space and become a fitness center operator herself.

If Rahn had any initial doubts, she suppressed them. She signed a lease at the end of October and, on Jan. 7 of this year, Survivors' Studio opened its doors.

"I hired trainers, put together a class schedule - I did everything in two months. I got a crash MBA course through the experience," Rahn says. "Honestly, though, I'm flying by the seat of my pants."

Survivors' Studio is a mere 1,500 square feet, with one treadmill and some stability balls, bands, balance trainers and free weights. The space is only open during class times (yoga and Pilates predominate), although the plan is to add hours as the studio becomes able to afford a staff. It is a women-only studio, which Rahn claims is necessary because, as she says, "There are people here who don't have any hair, women who don't want to put their prostheses in, which they would feel the need to do around men. It makes a huge difference in terms of women's willingness to try us out, especially older women." The most common form of cancer among women is breast cancer, she notes, with the average age of diagnosis being 61.

In its first seven weeks, the studio had managed to sign up 20 members, most of whom Rahn met while speaking to cancer support groups around the Minneapolis-St. Paul metro area. "It's not marketing," Rahn says about her frequent presentations. "Our main mission is education. If I could meet the rent, I'd let everyone join for free."

The studio's small membership makes for a stark financial picture. Rahn finds herself unable to take advantage of, for example, "frequent fitness" programs of the type offered by some insurance companies (in which portions of wellness center memberships are reimbursed to regular exercisers). Rahn says that to become an approved facility requires the purchase of specialized software for records management, a prohibitive cost for a facility as small as hers. Membership fees are supposed to make up about 40 percent of the studio's revenues, with the rest coming from fundraising and grant writing - similar to the local YMCA, or public radio, where the goal is "accessibility, not profit maximization," Rahn says. "We're really tiny, which is great, but it's a very big disadvantage in terms of cash flow."

One obvious question is whether there are enough cancer sufferers in the Minneapolis area to sustain a studio, even a small one. "Minnesota keeps really good cancer stats, so we know how many new diagnoses there are in our three-county area," Rahn says. "There are 1,400 new breast cancer cases a year, and 400 new cases of colon cancer among women. We're open to people with any types of cancer."

Cancer survivor wellness programming is a definite trend (see "Remission Accomplished," Oct. 2007, p. 58), with most of the activity occurring in hospital-based wellness centers and an increasing amount in for-profit clubs. Survivors' Studio is neither. One of its great selling points is that it is outside the sterile hospital setting, with the comfortable surroundings allowing for healing beyond the merely physical. It is also not a club whose business survival is dependent on exercisers who live within a two- or five-mile radius.

"We're based on medical research, but we're more - we don't look like a cardiac rehab unit here," Rahn says. "Since we're so different, the formulas for how far people will drive to work out here don't really apply to us. Some people are driving 25 miles to get here, and most are new to fitness. So I'm not just carving into that group of dedicated exercisers who make up the fitness market; I'm making a little dent because I'm reaching people who are pretty hard to reach. They're not the low-hanging fruit that the Anytime Fitness people are getting, the people who would exercise if only the club was two miles closer to them."

And yet, even with the nonprofit business plan, even with the prostheses and bald heads, Survivors' Studio faces the same day-to-day problems as the Curves down the street. Maintenance, liability, staffing - you know, the stuff of real concern to university professors everywhere. Rahn says, "One of the great things about living in Minnesota is it's a very active and civic state, and there are a lot of resources for people who want to start a nonprofit. The Minnesota Council on Nonprofits tells you how to do it, step by step - but it doesn't tell you anything about running a business."

Rahn continues her workout regimen as she sees to the daily operation of the studio, and she is in the process of becoming certified as a personal trainer (all of her trainers complete a cancer exercise specialist workshop, which Rahn leads, as a condition for teaching). If it all seems like a lot for a professor, mother and head of a nonprofit organization, Rahn agrees that it sometimes seems superhuman.

"This is energizing, what I'm doing," she says. "And I swear, it's not just me doing it. This is going to sound kooky, but I think I'm being called to do this."