Skyrocketing costs of raw materials and fuel are putting tremendous upward pressure on the pricing of strength equipment. 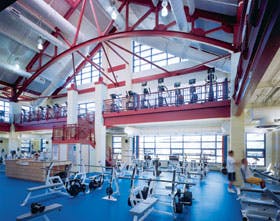 When fitness facility owners tuned in to the opening ceremonies of the 2008 Summer Olympics in Beijing, few probably realized the connection between the oft-noted improvements to China's infrastructure and the cost of their fitness equipment. But a straight line could be drawn between the grandeur and whimsy of the Bird's Nest (also known as China's National Stadium) and the barbells, dumbbells and selectorized equipment on fitness floors all over the United States.

In the past year, the raw materials that make up the bulk of strength equipment - steel, iron and composites of the two - have seen a global price spike unlike any in a generation. Exact figures are hard to come by, given the more than 3,500 different grades of steel-based materials available for use, but consider this: The price of hot-rolled sheet steel, a benchmark feedstock in various industrial applications, rose from an average of $400 per metric ton in 2007 to $1,154 per metric ton in June of this year. Add to that the cost of energy used in the manufacture and shipping of steel components from overseas, and you have all the ingredients for a surge in the price of strength equipment.

"Obviously, these significant increases have caused our inbound freight costs on our finished goods and components to escalate pretty quickly," says Matt Brennan, senior brand manager of strength products for Life Fitness and Hammer Strength. "Our short-term focus has been on improving anything internally that we can, such as manufacturing efficiencies - anywhere that we might be able to counteract these commodity increases. We've done a pretty good job with this, but in some cases, on certain product lines, raising prices is inevitable."

Steel and iron are not synonymous. Steel, an alloy, consists mostly of iron, along with a varying amount of carbon content that affects how soft or hard - how easily formed, or how difficult - the final product is. Other elements (tungsten, manganese, nickel, chromium) added to some steel only slightly affect its overall properties.

At one time, unalloyed iron was the primary element used in the production of dumbbells and weight plates, while steel was reserved for the tubing used in barbells and selectorized machines. Then less expensive than steel, iron had a dull finish that wasn't much of a drawback given the difference in cost. Once the price rose to the level of steel, the latter became the standard, prized because it is shinier and less brittle than iron. Even with free-weights now typically plated with chrome or encased in urethane, plastic or rubber, steel remains the dominant product used to make weight equipment.

Virtually all manufacturers of strength equipment get their components from China, which is where the commodity price problem began. Steel consumption in China has risen rapidly (from 100 million metric tons in 1997 to 260 million in 2003 to 402 million in 2007) at a time when steel consumption in the rest of the world has remained essentially flat. Despite its status as the world's largest producer, China's steel-making capacity has consistently been outstripped by demand, and raw-material shortages have become a consistent problem. Such shortages have included every raw material - iron ore, as a result of a lack of investment in iron ore mining around the globe; scrap metal, from which about one-third of steel is made; and the coal-based coke required to produce steel via the "integrated method," from which the other two-thirds of steel is created.

The rise in shipping costs, meanwhile, is not just related to the price of fuel, but also to the shortage of shipping capacity caused by the explosion in Chinese exports in all industries. This has been exacerbated, in part, by the shipbuilding industry's focus on building double-hulled tankers to hold crude oil at the expense of other types of carriers.

"It's complicated, and the situation can be very damaging if you don't have a handle on your cost of goods," says Michael Rojas, an owner of Iron Grip Barbell Company in Santa Ana, Calif. "When margins erode substantially, as they will with cost increases like we're seeing, you have to get a handle on it. It doesn't take long to discover you're losing money."

Iron Grip - the name comes from the industry's earlier age; the company's product lines are now made primarily of steel - is protected somewhat by its status as the only manufacturer of American-made free weights. The company's in-house steel fabrication facility, upgraded with automated equipment, allows it to review manufacturing processes more efficiently, and it isn't affected as much by rising shipping costs. Even so, Rojas says, "We're subject to the same raw materials pricing issues as anyone else on the planet, since steel and iron are global commodities. It has been very volatile for us, too, and we don't expect it to stop anytime soon. We hadn't increased our prices within some categories for four or five years - but in the past year we've had to make increases on several product lines."

Aside from avoiding steel and iron - there are still available, for group-fitness and home-gym applications, old-fashioned, bulky, sand-filled plastic plates - manufacturers are limited in their ability to contend with increased costs and potential shortages. Commercial-grade strength equipment is, as any product manager or marketing person will tell you, built to withstand constant use - built to last. Corners can't be cut from weight plates and weight stacks; they're as heavy as they have to be. Frames and benches have to be, above all else, sturdy. And unlike the construction field, which is among the industries hit hardest by the high cost of steel, the fitness equipment industry can't move to cheaper substitutes such as aluminum and strong plastics.

"We're adjusting to it," says Brennan. "Any way to remove steel from the equation is going to give manufacturers a price break, so we're always looking at ways to reduce costs. But at the same time, we still want to make sure the products are as robust in design as they are today. We have to walk a fine line."