With Older Health Club Members, Protection Against Falls is Paramount

As the age of health club members skews older, more care has to be taken to guard against falls. 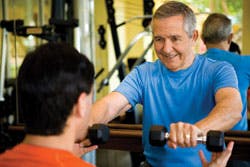 GRAY AREAS Club owners hoping to avoid financial injury should keep an eye out for any potential obstacle that could trip up a member.

Court arguments in Reoven Capri v. L.A. Fitness International centered on the waiver Capri signed when he joined his health club in January 2001. Capri's November 2002 fall - which resulted in a case that reached the appellate level and then boomeranged back to a district court before being settled in 2006 - was more straightforward than the lawsuit it spawned. Capri, a baby boomer in his 50s, slipped on algae that had accumulated around a drain on the club's pool deck, and sustained an undisclosed injury.

Slips and falls are among the most common accidental occurrences in everyday life, and among the most commonly litigated incidents affecting owners of property where members of the public gather. If there's a trend that suggests the problem will only get worse for health club owners, it's that older adults over the past decade have become the club industry's fastest-growing market segment. Older adults as a group enjoy higher earnings than the public at large - meaning both that they have more money to spend on attorneys and represent greater potential compensatory costs if an injury interrupts their lives - and will typically be less sure-footed than younger members. Put some members older than 60 in your club, scatter a few free weights around your fitness floor, and you've got the makings of a costly lawsuit.

A club owner hoping to avoid financial injury should therefore keep an eye out for any potential obstacle that could trip up a member - ice on the sidewalk, bunched-up floor mats in the entry, slick surfaces in the lobby or on stairs, puddles in the locker room or on the pool deck, and power cords as well as the aforementioned weights on the fitness floor. You should also make sure the solution isn't worse than the original problem. If you're going to purchase flow-through tile to span wet surfaces, for example, buy enough of it so the flow-through tile doesn't move when members step on it.

"There are a lot of little elements you can look at," says Colin Milner, CEO of the International Council on Active Aging, "even simple things such as lighting. I've been in clubs where the lighting is dim, the stairs are dark-hued, and it's a hazard, especially for someone with poor depth perception. As a rule, these are not things that need a whole lot of dollars to change."

Warding off lawsuits takes at least as much vigilance as money. Mopping up wet floors regularly (and keeping records of all your regular, preventive maintenance) demonstrates your knowledge of potentially hazardous conditions and that you have responded to them.

If you purchase a storage rack for free weights, it's important that you train your members to use it. "People are notorious for leaving their weights, bands, mats, everything out," Milner says. "I used to work out at a club where the owner would throw you out if you left stuff on the floor. After awhile, no one left their stuff on the floor. You can put up a sign, but people will abide by whatever rules you enforce. If somebody sues you, and they can show you have a pattern of not enforcing your rules, you're going to run into a problem."

One idea that has gained surprisingly little traction in the club industry is a formalized program of balance and mobility exercises that could help older adults in the community avoid falls. At first glance, such a program (typically offered at retirement villages, senior centers and community centers) could be good public relations, bring in new members and medical referrals, and help a club sidestep liability, all at the same time.

Cody Sipe, an assistant professor in the department of kinesiology at University of North Carolina-Greensboro and co-owner of Miracles Fitness, an over-40 health club in West Lafayette, Ind., thinks there are several reasons for the disconnect in the for-profit realm. First, the majority of health clubs may not have the staff in place, as would a medically based fitness center, to perform a detailed health history that includes knowledge of different medications and how taking them in combination might affect a person's balance. Second, a club might not see the need to offer a formalized program, since the simple routine of strength training at the center of most balance programs is something they offer anyway ("They don't feel like they have to give it a name," as Sipe says). And third, clubs may fear the liability that could come with working closely with seniors, even as they market to and attract them.

"There's a huge gap between all these great resources that exist, and what the clubs are doing," Sipe says. "Most clubs get older adults to join, give them a quick PAR-Q, demo the equipment, and off they go. They're marketing to them, and they're getting a lot of them to join, but it doesn't mean they're providing any higher standard of care, screening or training than they're providing to anybody else."

Miracles Fitness runs one of the more established balance programs, FallProofâ ¢, which was developed by Debra Rose, director of the Center for Successful Aging at California State University, Fullerton. Participants are screened (a full medical history is taken), and then given fall-risk and balance-component tests. But the program itself requires no specialized equipment.

"That's the great thing - with all the toys that are already available, you can do the vast majority of balance training," Sipe says. "Look around a PT clinic - they use foam pads, stable and unstable surfaces, basic weights, tubing. Even for the testing part, there are a ton of field tests out there, but they're not necessarily going to be diagnostic. We're not clinicians, we're not trying to diagnose anything. We use our field tests just as a screening tool to determine whether older adults are deficient in certain areas, and then we match up training to those areas. A lot of clubs could easily implement some higher-quality assessment and training programs related to balance and fall prevention without incurring huge costs."

Noting that each year one of every three people over the age of 65 falls, Milner is critical of what he sees in too many health clubs that offer older adult programming. "Clubs might train seniors on a wobble board, then leave them unsupervised on various pieces of equipment," Milner says. "Put them on a treadmill, and they fall. Put them in a group exercise class doing a lot of crossover movements, and they fall. Only a handful of clubs use something more sophisticated than a wobble board, a program that can help instructors analyze, assess and make recommendations. If you're going to address the baby boomer and older adult market, you need to address what their issues are, and one of their major issues is falls."