Playgrounds for Seniors Popular in Europe, Asia and North America

Although they're already constructed on four continents, so-called "playgrounds for seniors" are making news as a potential worldwide trend. 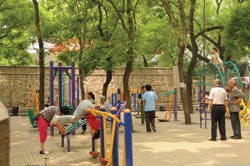 MADE IN CHINA Playgrounds for seniors in Beijing successfully mesh recreational users of different generations.

A strange-but-true story can be hard to resist, and one such story emanating from England last spring proved irresistible to many news organizations, bloggers and readers. It involved the opening of London's first outdoor playground for senior citizens, located in the city's popular Hyde Park, and the story went viral although its subject was neither completely accurate - it is more fitness park than playground - nor all that strange. England had already opened its first playground for seniors (in Manchester in 2008), an event that hardly penetrated the world's collective consciousness. Likewise, a story from 2006 in The Guardian on the forthcoming debut of NÃ¼rnburg's SeniorenspielplÃ¤tze (senior citizens' playgrounds) failed to find legs.

Hyde Park Senior Playground eventually made 500 newspapers, but as the references to "swinging London" multiplied in print and online (despite no swings installed), it was easy to miss the wider story. Over the past six years, senior playgrounds have been constructed on at least four continents and are becoming more abundant - even in the United States, where they may well be about to bust out of the confines of senior living facilities.

Attempts to pinpoint the genesis of the senior playground concept have targeted Finland and, specifically, the University of Lapland, where research into "three-generational play" revealed that three months of regular play at a prototype playground helped older people build muscle, reduce fat and improve their coordination, speed and balance. It appears, however, that Asia has outpaced Europe in the development of senior playgrounds, and may well be the true originator.

"They're all over the place in China and Japan," reports Colin Milner, CEO of the International Council on Active Aging, who recently visited, filmed and photographed a number of installations in Beijing. "They have everything from fitness-style equipment, such as a fly or lat pull-down, to parallel bars. The social aspect was one of the biggest things; on one side you'd find young people on children's playground equipment, and on the other side, older people on fitness equipment and playing table tennis. It really meshed the generations."

The social aspect was one of the primary objectives in NÃ¼rnburg, where lawn bowling and a giant chess set eventually trumped the more active areas (such as a jogging track, roller-skating path, soft badminton court and trampoline) that were initially under consideration by Horst FÃ¶rther, NÃ¼rnberg's head of sport and deputy mayor. Bocce, bowling and chess became the centerpiece of senior citizens' playgrounds in several German cities. Manchester's playground, supposedly based on the German concept and built next to a children's playground by the residents' association in Dam Head Park, Blackley, for Â£15,000 (around $22,500), nonetheless tilted toward fitness - including skate, ski and press machines, and stations for pull-ups, push-ups and pedaling. But even as this first UK playground was providing the blueprint for the second, researchers out of Wiesbaden Polytechnic in western Germany were calling into question playground proponents' assumptions about usage among older people.

They observed play at six senior citizen playgrounds in the region and surveyed 180 older people in nearby Frankfurt. One-third of survey respondents said they liked to exercise and half said they could imagine occasionally using the playgrounds, but not with children present. The researchers' observations in the field bore this out - while many seniors found it embarrassing to exercise in the presence of younger people, in more private playground settings, exercise machines were being used regularly. Moreover, more-challenging machines, such as those that test users' balance, were largely avoided by seniors, who preferred more low-key components - mini golf, gravel beds to massage feet and Kneipp Cures (a form of hydrotherapy developed in Germany).

Differences in the way each country's facilities have been received by potential users may be cultural, and may also reflect under what rules different playgrounds are operated. By all accounts, the Manchester playground is seeing regular use, and five of the Hyde Park playground's six pieces of Xercise equipment from the UK subsidiary of Denmark-based Kompan Inc. - including a cross-trainer and a stationary bicycle - are proving popular. Although they appear wary of the sit-up apparatus, seniors there are exercising without embarrassment, even with most ages welcome - a notice is posted that specifically excludes children under 15. (Senior citizens' playgrounds in Germany are even more exclusionary; a facility in NeukÃ¶lln, Berlin, bears a sign warning that people under 65 may only use the playground if given explicit permission or if under the supervision of a doctor or pharmacist.)

A question for purists is whether, with the grandkids barred, these facilities can rightfully be called playgrounds. Julie Rearick, direct sales and business alliance manager for Lewisburg, Pa.-based Playworld Systems, notes that the European playgrounds are at least co-located with playgrounds for kids, allowing for what you might call "parallel play."

"How do seniors really play?" Rearick asks. "Exercise, being active, is certainly one of the values of play. But to put seniors on a slide and have them going up decks and ladders, that kind of thing, I wouldn't think that they would use it."

Japan boasts the longest life expectancy in the world, and its roughly 36,000 people over 100 years old (as of September 2008) make it second to the United States in centenarians per capita. With fewer Japanese people having children and more than 20 percent of the population over the age of 65, many local governments have begun disÂ­assembling children's playgrounds and converting them into exercise parks for retirees.

Tokyo's Nursing Care Prevention Parks began appearing in 2004 and, according to a recently published online interview with a representative of equipment manufacturer Takao Corporation, feature workout stations that share certain movements (obstacle course steps) and colors (rainbow handles) that would not be out of place in a children's playground. A report last fall on New Tang Dynasty Television showed older adults at one Tokyo park swinging on a jungle gym made especially for seniors, walking on balance beams and utilizing a stretching apparatus. Classes held at the parks, which teach proper movement and equipment usage, are conducted by groups such as the Association of Physical Fitness Promotion and Guidance, and are funded by local governments.

Closer to home, the province of British Columbia has spent $2 million on outdoor playgrounds for older adults, Milner says. But these facilities are "way more prevalent in the United States than anywhere else," he adds, even if senior playgrounds in the U.S. have been funded and developed almost exclusively by retirement communities, with those under the purview of municipal agencies located at senior centers rather than in public parks.

Another major difference in U.S. senior playgrounds is in their design. Exercise stations spread alongside walking paths - in the manner of '70s-era Parcourses, another European concept that made its way over the pond - remain the most typical layout. Ft. Payne, Ala.-based GameTime, which purchased Parcourse Ltd. in 1995, still offers that line of equipment; Grover Beach, Calif.-based TriActive America offers both fitness trails and trademarked Fitness Zonesâ ¢; while Playworld Systems' line targeting seniors bears the name LifeTrailsÂ®.

Rearick is quick to downplay the conceptual connection to Parcourse - "It's not even on our website anymore," she says - but, in fact, the site notes that the "LifeTrail Advanced Wellness System" can be mixed and matched "to create up to seven three-sided outdoor fitness stations, which can be configured in clusters for circuit training, or along a path to give users the added health benefits of walking."

"We developed the first one to go on a trail because in our research we found that the preferred method of exercise for a senior was to walk," Rearick explains. "But now, we're finding that people want to group them and use them more for circuit training."

That shift - from older people walking to older people working out - suggests that an expansion of senior playgrounds into U.S. public parks could be just around the corner. Public agencies are increasingly focused on the needs of the Baby Boom generation as the first Boomers turn 64 this year, and the cost of outdoor equipment represents an infinitesimal percentage of the cost of indoor fitness and recreation components.

That shift - from older people walking to older people working out - suggests that an expansion of senior playgrounds into U.S. public parks could be just around the corner. Public agencies are increasingly focused on the needs of the Baby Boom generation as the first Boomers turn 64 this year, and the cost of outdoor equipment represents an infinitesimal percentage of the cost of indoor fitness and recreation components.