"Okay, class, who's ready to sweat?" Such a question might be greeted with enthusiasm - even cheers - from a room full of eager stationary cyclists. After all, that's why they're here. And in this setting, inspiration translates to perspiration. If it doesn't, something's wrong. 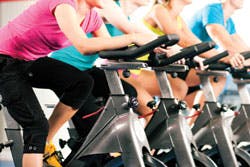 Bike components directly underneath the rider's head and arm are particularly susceptible to the ill effects of sweat.

Such a question might be greeted with enthusiasm - even cheers - from a room full of eager stationary cyclists. After all, that's why they're here. And in this setting, inspiration translates to perspiration. If it doesn't, something's wrong.

As gross as it may sound, that same sweat should serve as motivation for facility operators to keep their group cycling equipment clean in the interest of the long-term health of the bike itself. "Sweat is the enemy of every piece of equipment in a health club, most notably anything used for cardio exercise," says club owner and frequent AB contributor Barry Klein. "Sweat is what ages treadmills, ellipticals and stationary bikes. It gets everywhere and accelerates corrosion."

Since most group cycling classes last 60 minutes (or, at most, 90), with each stationary bike exposed to the physical pounding (and resulting sweat) of multiple classes per day, preventive maintenance on stationary bikes should be an hourly concern. In that sense, the most effective tool in keeping sweat from corroding bike components and breaking down lubricants is a clean towel.

"You'll see clubs that actually have a towel and a spray bottle on just about every piece of equipment, with a sign that says, 'Please, for yourself and your fellow users, make sure to wipe down your bike before and after you use it,'" says Rich Hanson, executive vice president at stationary bike manufacturer RealRyder. "The first line of defense is the actual user, if you can get him or her to wipe down the bike. A close second would be the actual design of the equipment and whether it is designed to help keep sweat off."

Built to give a good sweat, stationary bikes also have to be able to take one. According to Hanson, unchecked sweat is "a major contributor" to brake pad deterioration, along with airborne dust and dirt that collects on the flywheel. Some manufacturers have covered the flywheel and brake pad in their bike designs or moved these components to the rear of the bike's footprint, out of the heavy sweat zone below the rider's head and arms. Some have eliminated the brake pad entirely by employing electromagnetic resistance to the flywheel. Facilities with bikes featuring a brake pad should make sure that the pad is released after every ride, allowing sweat that has collected between the brake pad and flywheel to dry. Manufacturers have also specified plastic parts or part covers (over the bike's drive chain, for example) to further abate potential corrosion problems within the sweat zone.

For some bike components - handlebars, handlebar stems, pedals, crank arms, sprockets and the frame hardware that holds them all together - there's no escaping sweat. That's why some manufacturers test bike parts and anti-corrosion treatments in special pressurized tanks that mimic and accelerate the ill effects of salt. This allows the manufacturers to witness potential long-term weaknesses in a shorter timeframe.

"A lot of money has gone into looking at how damaging sweat can be," says Darrin Pelkey, vice president of sales and marketing for Keiser, which conducts such testing. "If you have poor parts, the bike's weakest link could be the part, and we put a lot of time and effort into making sure we have a well-engineered and well-built bike with the right parts. But sweat is still going to be the leading thing that we deal with."

The salt found in sweat can hasten the degradation of the threads that attach pedals to crank arms, for example, leading to vibrations during performance and, ultimately, performance breakdown. Manufacturers may recommend monthly application of a mist wax, either wiped on with a cloth or sprayed directly onto bike parts and wiped off. "Think of a bike like a car in the wintertime," says Pelkey, whose company recommends a readily available brand of car wax for bike maintenance. "One of the ways to protect a car from road salt is by waxing it."

There's an aesthetic payback, too, in keeping bikes sweat-free and gleaming. Even when dry, sweat residue tends to gather dirt and dust, dulling the appearance of the equipment. "The person who walks into a club for the very first time expects everything to look brand new," Hanson says. "Even if your club has been there five, 10 or 20 years, your equipment better be in top shape and looking good."

As group fitness trends have come and gone, stationary cycling hasn't budged. In fact, entire clubs are now devoted to the discipline. But how much investment in time and resources is needed to keep a given group cycling operation well oiled over the long haul?

"There has to be a balance," says Hanson, who worked in club operations before joining the manufacturing side of the equation 30 years ago. "How much do I spend on preventive maintenance versus equipment replacement? How will my potential member attrition rate impact my bottom line?"

Klein's place of business, Elevations Heath Club in Scotrun, Pa., hires technicians from a local bike shop to come in and conduct semiannual tune-ups on the club's 35 bikes spread over two locations. The club refers members to the shop and gets referrals (and a reasonable hourly service rate, with no travel charge) in return. "Our local guys keep parts in stock so we don't have to order anything," says Elevations co-owner Rob Bishop. "They replace any worn parts and clean and lube everything. In addition, we check the bikes every week to look for problems."

And that internal measure is costly all by itself. Adds Klein, "We actually pay a staff member double-time every week to do the labor-intensive and disgusting task of cleaning the nooks and crannies of every bike."

Bishop estimates that the cost of annual maintenance - considering both preventive maintenance and the parts and labor needed to make repairs - is as little as $100 on a new bike, and closer to $1,000 on a bike nearing the end of its useful life. Unlike large fitness chains with tremendous buying power (and the ability to turn equipment over every three years merely to feature the latest and greatest), Elevations is riding into a fifth year with its current fleet of bikes. But the time for replacement is fast approaching. "When a bike constantly needs repairs, it may not be worth continually dumping money into it," Bishop says. "The breakdowns become more frequent, and the complaints from members continue to increase."