At the dawn of the modern health club era - the mid-1970s - Rick Caro became fascinated by a foursome of elderly women who gathered for a regular tennis match at one of the clubs Caro owned. 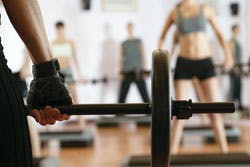 At the dawn of the modern health club era - the mid-1970s - Rick Caro became fascinated by a foursome of elderly women who gathered for a regular tennis match at one of the clubs Caro owned. The ladies would spend 90 minutes on the court, mostly walking after balls they had missed, and then spend at least as much time in the lounge discussing the match over coffee or juice. "It was revealing to me," says Caro, president of health club consultancy Management Vision Inc. in New York. "The match wasn't that challenging, or interesting to the outsider, but it was obviously of critical importance and interest to the players."

Social interaction among health club members should be of critical importance and interest to today's club operators, since an individual's decision to either remain a member or quit can hinge as much on the building of interpersonal relationships as on the building of strength and endurance.

More than 15 years later, group exercise programs are exploding. "Clubs that have a strong group exercise component have a much higher retention rate than those that don't," says industry consultant Casey Conrad. "The statistics that have been coming in over the past couple of years are absolutely compelling."

By offering as many as 20 specialized classes in yoga, cycling, water aerobics, swimming and weightlifting, health club chain Life Time Fitness, which boasts 90 locations in 20 states, cut its attrition rate from 42 percent in 2009 to 36 percent last year, while revenue increased 10 percent in the last quarter of 2010. "Say you tell us you were a swimmer in high school. Well, if we can get you connected with a social network of swimmers, it works," Life Time spokesperson Jason Thunstrom told the St. Paul Pioneer Press in March. "It's a place you want to be, rather than a place you have to be."

Creating such an inviting place can begin with the physical characteristics of the club itself. "The interesting evolution in club design has less to do with the programming spaces - although that's evolved and come back; aerobics was dead, and now group fitness is huge," says Rudy Fabiano of Montclair, N.J.-based Fabiano Designs, which specializes in health club design. "The real evolution is in the importance of the non-exercise spaces. Design not only has to accommodate the actual programming needs, it also has to anticipate potential areas of interaction."

The juice bar, a club's natural hub of social activity, is typically located near the building entrance as a convenient stopping point before and after workouts. That said, club designs are now incorporating lounge areas into the layout of the fitness floor, as well as the locker room. "It's easy to sort of show off your style in the lobby," Fabiano says. "Smart design would allow you to carry a design theme and have social nodes throughout the whole club."

According to Hervey Lavoie, of fitness and recreation center architecture firm Olson Lavoie Collaborative in Denver, additional prime gathering spots include pool observation galleries and decks, as well as the peripheries of exercise studios and basketball and racquetball courts. "These lounges are ways to enrich the interior design and make clubs warmer and more welcoming," says Lavoie, adding that open stairways and balcony overlooks "create natural opportunities for members to see and recognize each other."

Furniture groupings within the locker room are a luxury typically reserved for high-end clubs, but an increasingly popular alternative is the anteroom, located just outside the locker room as a social buffer between the workout floor and wet area. "Instead of closing it in and having a very small percentage using it in the locker room - and getting some awkward, uncomfortable scenarios occurring - moving it right outside the entrance makes a lot of sense," Fabiano says. "If I'm waiting for my wife, I can watch TV."

Certain clubs, such as those offering racquet sports, are inherently equipped for member interaction. "Anytime you have a component that involves playing partners, such as tennis or racquetball or squash, there's always a social component, because you have to schedule a match and play with other people," Caro says. "The challenge has been in the fitness areas and the rest of the facility. In some ways the fitness equipment area has led to a lot of advances, but it's also led to people becoming very isolated in their experience."

Cardio machines equipped with personal video monitors are now commonplace, and when headsets are plugged in, exercisers can immerse themselves in their own private entertainment world. That's not necessarily a bad thing. Such equipment and the escape they provide might be the sole reason the individual joined the club in the first place, and self-motivated users might not need or desire a social experience with every club visit.

However, even otherwise impersonal cardio equipment can be programmed to foster group dynamics, according to industry veteran Sandy Coffman, owner and president of Programming For Profit in Bradenton, Fla. Having exercisers compete against each other based on miles run on a treadmill or ridden on a stationary bike can make fitness more social and fun. "Everybody documents their own thing and then compares it with everybody else in the group," says Coffman, author of the 2007 book Successful Programs for Fitness and Health Clubs: 101 Profitable Ideas. "Are there people out there who want to work out by themselves, do their own thing and not talk to anybody else? Yes. I say it's 10 percent. Even if it's 20 percent, is that how you want to run your business? Or do you want to run it for the other 80 percent?"

Coffman, a former co-owner of three multipurpose fitness facilities in the Milwaukee area, became nationally recognized for building hugely successful women's racquetball programs in the 1980s, complete with onsite season-ending parties for participants. "Everybody asked, 'What are you doing, and why is it working?' Coffman says. "So I took a year off and really examined it, and I found that the sociability factor was the key to the success."

With that epiphany, she sold her gym interests and hit the speaking circuit (she's been a frequent presenter at the Athletic Business Conference). "Everything is about making the club a second home," she says. "It takes a lot of care, effort and empathy. It takes a lot of calling and talking, marketing and promoting. But it works."

Some facilities offer clubs within their club, linking fans of professional sports teams or individuals with shared interests ranging from investing to wine tasting. Whereas member profiles and word of mouth once served to facilitate the formation of affinity groups and friendships, today's club operators can tap social media to find common bonds. Conrad is a passionate proponent of Facebook, for example, if it is used properly. "I'm not just talking about having a Facebook page, but utilizing the group element of Facebook," she says. "If clubs aren't utilizing the group feature of their Facebook account, they're not going to get near the same level of socialization between members that they will if they are using it. A lot of people don't know that."

Even personal training is becoming more social these days. The International Health, Racquet and Sportsclub Association reports that 90 percent of its member clubs offer personal training of some kind, and personal-training participants now number 6.5 million compared to four million in 1999. "The main factor for growth, even in the recession, is the trend away from one-on-one training toward small-group or semi-private training to increase the fun level while mitigating expenses," according to IHRSA's list of six fitness trends for 2011. Says Conrad, "The member pays less, so he or she has a greater value experience. The trainer makes more per hour, and the club makes more per hour. All around, it truly is driven by financial incentive. Is it affecting retention? Of course it is. But people did not connect those dots early on to say, 'Let's do it for retention.' It was done to enhance revenue."

"There's certainly a payroll reason, an effectiveness reason and a social reason for small-group training," adds fitness industry consultant Michael Scott Scudder. "I've been a big advocate of it for several years, and I fervently hope that it becomes the norm."

IHRSA's trend list also includes age-appropriate offerings and cross-promotion with non-club activities, such as triathlons or skiing. "Socially based exercise is up," according to an association media release, with more clubs offering group exercise of all kinds. "Based on survey responses from 3,306 IHRSA member clubs, group cycling is still growing, group strength classes have increased, and boot-camp-style programs are appearing everywhere, from in-club sessions to trainers leading Sunday morning sessions in the local park."

The USC researchers found that social interaction may be especially effective in the retention of single, divorced or widowed individuals. That might help explain the fact that Latin dance and nightclub-inspired workouts are booming, not only in clubs but in church basements, school gymnasiums and corporate offices, according to IHRSA.

One trend that appears to be here to stay (but escaped IHRSA's list) is that of the $10-per-month club, "which is incredibly impersonal, and I don't mean that in a negative way," Conrad says. "There's not a lot of socialization going on in that environment, because there's no group exercise, there's no personal training. The people who are going to be attracted to and stay with that are fitness people who don't need any help. They watch their screen. They listen to their iPod. They know what they're doing."

Such clubs are likely to not even try to retain members - "I can't keep you motivated to do something you don't want to do," Planet Fitness CEO Michael Grondahl told The New York Times in January - but other clubs fail at socially integrating members because they either don't have the manpower to invest in it, as Scudder contends, or, as Coffman claims, "It's all a bunch of talk and not a lot of walk."

Caro cites two clubs with different approaches that are walking the walk. One is VillaSport in Colorado Springs, Colo., which hosts major events at the club that often have little to do with fitness and everything to do with community outreach. In January, the club's second annual school open house drew more than 40 area schools and close to 1,000 participants. The other is Red Lerille's Health & Racquet Club in Lafayette, La., where the owner, a former Mr. America, gives most of the tours himself and makes it a point whenever possible to connect prospects with existing members based on common interests and experiences - no small feat considering his club serves some 18,000 members. "All of a sudden the prospect now feels, 'If I join, I have a starting point,'" Caro says. "There weren't any formal meetings, they didn't sit around a table. It's just plain one-on-one, back-to-basics kind of thinking, but that's what Red does so well."

Whether such connections are encouraged by a facility's operators or by its designers, "there's a bond there, and that's what leads ultimately to retention, because people go where they know other people, where they're liked, where they have relationships," Fabiano says.

"We are in the club business," says Coffman. "People join a club to be with others like themselves, with similar interests, skill levels, schedules, personalities, ages and genders. No one joins a club to be alone. It doesn't make sense."