To charge a fee, or not to charge a fee, that is the question. Enhancement fees - one-time annual charges collected from every member of a health club ... 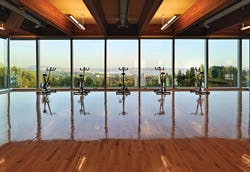 Enhancement fees - one-time annual charges collected from every member of a health club, ostensibly to build a capital fund to purchase equipment or otherwise enhance a facility - have been around in the club world for many years now. Anecdotally, it seems that most clubs collecting enhancement fees set them in the $25 to $40 range. Some clubs collect the fee on a member's anniversary date, while others collect the money on the same calendar date every year. If you are a member on that date, you pay the fee. Enhancement fees in our industry have their roots in country clubs, where such fees are common, but on a much larger scale.

At last year's Athletic Business Conference, we took part in a panel discussion that generated a spirited dialogue concerning enhancement fees. Some members of the panel were opposed to them, one rather vehemently so. Another panelist had successfully implemented an enhancement fee at his club and was very pleased. We described how we have been intrigued by them for years. Our problem is that we have never been able to craft a way to consistently and fairly administer such a fee (plus we have other objections, which we'll get into later).

Everyone who has implemented these fees will tell you that doing so causes a lot of disruption, confusion and complaints, especially during the first year or two. Members just aren't used to the annual fee, and they freak out when this extra charge hits their checking account or credit card.

Even with those downsides, though, club owners who have instituted an enhancement fee love it. We have never met someone who charges an enhancement fee who says, "I wish we weren't doing it." Why? Because most members are ultimately quite happy to see annual reinvestment in a facility, especially when they can see their dollars at work. Some clubs even include their members in the decision-making process regarding how to spend the money, which makes the members even more invested. This upside outweighs the downside of the moaning and groaning that occurs every year when the fee is collected.

So, why doesn't everyone implement these fees? Why haven't we? As one ABC panelist noted, implementing an enhancement fee seems like managing out of fear. A club is too afraid to raise its dues by $3 per month, and chooses instead to implement a $36 per year enhancement fee. We understand why clubs make that decision because, after all, we know that too many potential health club members shop on price, and every dollar matters when there's a $10-per-month guy down the street. But it does seem somewhat dishonest. We all know there ain't nobody telling a prospect about that annual $36 fee until the contract is being signed.

That brings us to the whole issue of the contract. Everyone on our panel agreed that too many health clubs are not forthright about their enhancement fee, burying it in the contract and not discussing it appropriately when the member joins. Because of these borderline deceptive practices, some in the club industry expect state legislatures to pass laws prohibiting enhancement fees, and others expect class-action lawsuits to result. So, we'd strongly encourage anyone considering such a fee to include it prominently and clearly in the membership contract and to discuss it with new members when paperwork is being signed. Naturally, we encourage that level of honesty and transparency with all aspects of your membership contract.

A related contract issue is how to handle your existing members, whose original agreements did not include the existence of this annual fee. Certainly, your contract must include a clause that allows you to charge additional fees and/or increase prices as you see fit, but even then it's one thing to announce a monthly dues increase and quite another to implement a whole new fee. When you announce an enhancement fee to your existing members, be sure your staff is well prepared to address questions, complaints and angry tirades.

Another consideration is when fees should be charged. If you charge the fee on a member's anniversary date, that's quite an anniversary gift, right? "Thanks for being with us another year - you owe us an additional $36!" If you charge the fee on a set date every year, and your members are month-to-month members, you are surely going to lose a bunch of them before the fee is charged, and you are going to annoy the ones who cancel soon thereafter. We met one club owner in 2009 who "solved" this problem with his month-to-month members by having a 60-day cancellation policy. So, when he "reminded" his month-to-month members every October 1st about the pending enhancement fee on November 1st, it was already too late for them to cancel. While we found that to be a creative solution to this particular problem, we also found it offensive on various levels, given that we think a 60-day cancellation policy is inappropriate and bad for our industry.

We also can't figure out what to do about our corporate members. We have many members who pay their monthly dues via payroll deduction, and then the company's accounting department remits payment to us. How would we collect enhancement fees from them? Sure, we could raise their prices to match the enhancement fee, but that would not be in keeping with the spirit of the fee.

The aspect of enhancement fees that makes us the least comfortable is the very basic question about what to do with the money. We personally do not like the idea of involving our members in such decisions. Let's say we had 1,000 members paying $36 per year and found ourselves with $36,000 to spend. What if we didn't want to "enhance" the facility? What if we needed to do hard-to-see repairs that we knew were important but that members wouldn't really understand? We believe it's our job to decide how to manage our finances, and if we want a capital equipment fund, we should be setting aside the money from operating cash. If we have to decide between new equipment and day-to-day maintenance and expenses, we should decide what to spend, and when. Heaven knows our members are vocal about what they would like to see us do and how they think we should spend their dues, but ultimately those are our decisions. In a member-owned country club it might make sense for the members to have a big voice in how funds are spent, but that doesn't seem right for us.

Possibly, our only reason for being intrigued by enhancement fees is their 100 percent approval rating among fellow club owners. They can't all be wrong, can they? On the other hand, it feels wrong to us. If you think it's right for you, we'd encourage you to go for it - only, do it the right way and with your eyes wide open.