Prairie Athletic Club calls itself the largest health club in Wisconsin, and few casual observers would question that claim. After all, how many clubs in these northern climes can boast their own outdoor water park? 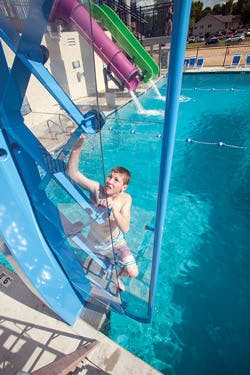 Prairie Athletic Club calls itself the largest health club in Wisconsin, and few casual observers would question that claim. After all, how many clubs in these northern climes can boast their own outdoor water park?

Even Dolphins Cove, as the park located adjacent to the Sun Prairie club is called, is expanding. On July 1, Adventure Lagoon opened with a new 3,474-square-foot pool, including 550 square feet of pool surface and a 12-foot-deep landing zone serving a 16-foot-tall climbing wall. Situated between drop slides and basketball hoops, and opposite zip lines plunging into an area that alternatively serves lap swimmers, the tower of clear panels with evenly spaced handholds reaching 13 feet above the water surface embodies Prairie Athletic Club's atypical nexus of physical fitness and aquatic recreation.

"Our goal was to add amenities for the older child," says club co-owner and president Jenny Simon, referring to the custom-painted blue AquaClimb Sport model mounted to the pool wall. "The idea was to have teenagers use it during the day, and then our personal trainers would use it as part of their aqua boot camp programs at night or in the mornings. Our trainers have wanted a climbing wall for a long time."

Simon admits she was unaware that climbing had crossed over into the aquatics market when her pool contractor - Neuman Pools Inc., in nearby Beaver Dam - approached her about the amenity's availability two years ago. The activity, in which climbers scale the wall to a comfortable height and fall into deep water feet first, had actually been gaining a recreational aquatics foothold for years prior to that as the brainchild of AquaClimb founder Russell Moy, a veteran of the dry-land climbing wall industry.

Moy's research found that there were 295,000 commercial pools in North America, and that every year roughly 4,000 of them are renovated. Recreation industry surveys indicated that swimming remained a popular activity, and climbing was on the rise. Marrying the two seemed to make perfect sense. "Diving boards and slides have been around since the 1920s, and we've had nothing new on the side of the pool since then," Moy recalls thinking in 2003, when he began to pitch his vision to aquatics industry professionals - a revelation he called "crazy."

A DIFFERENT WALL AquaClimb, the lone player in the marketplace until PlayCore launched Kersplash two years ago, has been constantly tweaking its product since the brand debuted in 2005. Rethinking the traditional handhold, for example, took some trial and error. "People swimming have very soft feet and hands from the water, so putting an abrasive texture, like that of a normal climbing hold, is absolutely the wrong thing to do," Moy says. "We learned that, and now we have an orange peel texture on everything. We've really tried to perfect this, where it displaces the water and there is no abrasion."

Kersplash holds differ from the dry variety, too, according to Tracy Whitney, director of marketing at Everlast Climbing (a PlayCore company), in that they're formulated to withstand UV and chlorine exposure. They're also wider and comfortably concave. "The biggest difference is actually in foot-friendliness," Whitney says. "When you climb on a land-based climbing wall, you have shoes on. When you climb on the pool wall, you're in bare feet. Therefore, it's really important that the handholds be comfortable enough to climb on, while still being easy enough to grab. So we reshaped - and reshaped again - our holds."

But aquatic climbers aren't limited to handholds. AquaClimb offers vacuum-molded, three-dimensional panels that climbers can scale without using handholds at all, and the square panels can be periodically rotated to change a wall's characteristics and keep the climbing experience fresh. (A ledge becomes a vertical face on a panel rotated 90 degrees, for example.) Moreover, the company recently introduced AquaClimb Crystal Ice, a clear version of its 3-D panel, in direct response to the Kersplash innovation of clear panels. Not only do clear panels look cool in the aquatic setting, they make a wall easier to monitor. "It's safer, because anyone at the facility can look to see if someone is on the climbing wall at any one time," says Aquatic Safety Research Group president Tom Griffiths, who has consulted with both companies.

GREATER POOL USE State health inspectors have been slow to embrace the aquatic climbing wall concept, and that's a shame, according to Griffiths. "A lot of pools need help, particularly standard boring rectangular pools, and a climbing wall can be mounted anywhere to get more people into the pool," he says. "Health departments need to be a little bit more flexible when someone wants to put in a climbing wall instead of wringing their hands, and saying, 'Well, I don't know about that.' "

Soon, few health departments will be able to plead ignorance on the subject. Moy reports that AquaClimb sales in the first four months of this year are 20 times what they were in all of 2005. "America really leads, in my opinion, in creating sport and recreation to make a swimming pool profitable," he says. "In France, the swimming pool is for swimming. You don't do anything else."

"We've found that we're replacing many old and non-compliant three-meter diving boards," Whitney says. "It's a great space because the diving well is already in existence and it provides a fun new feature that gets used."

Moy points out that, unlike land-based climbing walls, aquatic walls don't require padded surfacing or belay systems, and as a result give the user a much more rewarding experience. "It's a controlled perceived-risk activity, and I love that thought," he says. "Let's say little kids only go up two meters and they fall in; then they go up two and a half meters and fall in. Eventually they will reach the top. I think that's a great life experience for them. And the difference between land and aquatic climbing is that when you get to the top of an aquatic climbing wall, you are rewarded with a fall. That's the reward for the achievement." 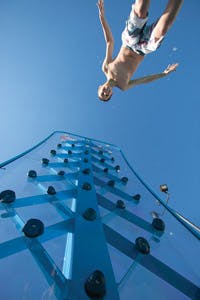 Though users can ascend to heights approaching 20 feet above the water surface, aquatic climbing walls are seen as much safer alternatives to diving boards - and three-meter boards, in particular - for a number of reasons.

Unlike a diving board or slide, which are accessed from the pool deck and may entail scaling stairs and platforms with inadequate railings (catastrophic falls onto pool decks are all too uncommon), an aquatic climbing wall is only accessible from the water. "Because you have to swim to a climbing wall to climb it, you are already a known swimmer," says AquaClimb president and CEO Russell Moy. (Prairie Athletic Club in Sun Prairie, Wis., mandates that users of its wall be at least 52 inches tall and strong swimmers, as they will plunge into water 12 feet deep, according to club president Jenny Simon. Only one climber is allowed on the wall at a time.)

Walls protrude several inches from the pool deck, rise at an angle over the water surface, and typically feature two feet or more of smooth panels at the very top as a deterrent to climbing over the edge. In other words, risk of contact with the pool deck is all but eliminated.

"The only danger with the wall is if another kid gets underneath the person who is climbing and the person on the climbing wall falls on top of that other person," aquatics safety expert Tom Griffiths says. "But it just shouldn't happen."

That's because a lifeguard should be dedicated to monitoring the wall, its drop zone, and nothing else. A typical drop zone measures 10 feet out from the wall (about the width of two lap lanes) and five feet from either edge of the wall - a much more controllable space than that of a spring board. "With diving boards you can go way out, you can go right, you can go left, you can go close to the board, you can go all over the place. You don't know where you're going to go," Griffiths says. "But when you let go of the climbing wall, you're going straight down."

"And when you fall into the water feet first, there isn't the disorientation like after dropping from a slide, when your body flips upside down," adds Moy. "From that perspective, it's an easier lifeguarding operation."

And more interesting. Says Griffiths, "Guarding a wall is relatively fun, because you don't know what path the kid is going to take. You kind of fixate on this kid to see where Spiderman or Spiderwoman is going to go before falling in."

Could a wall catering to teens, like the one at Prairie Athletic Club, inevitably invite users to take an otherwise safe activity to the extreme - perhaps challenging each other to see how far they can launch themselves from the top, or whether they can complete a back flip? "I know people dive. I've seen them dive," Moy says. "We say no diving, but people also go head-first down a slide, and they're not supposed to do that."

The lack of spring in a climbing wall, coupled with its relatively precarious footing, precludes most major hijinks, according to Griffiths. "You have to understand that it's not like they're standing on a deck," he says. "They really don't have a great platform to do anything too crazy."- P.S. 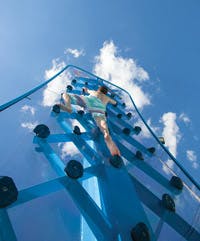 Aquatic climbing walls are a new enough concept that a majority of Americans have never seen one, much less climbed one. So what's it like up there? AquaClimb president and CEO Russell Moy:

"The reality is if you're climbing 20 feet off the pool water level, that looks like 500 feet, and you still have to drop in. And I must admit, it takes your breath away every time you do it, because it's like being on top of a five-meter diving board. There's no way down apart from jumping or climbing down, and by then you've probably lost the core body strength that you needed to get up there." - P.S. 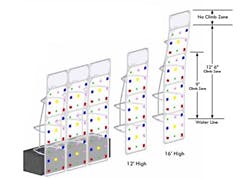 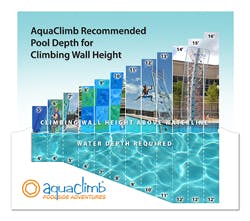 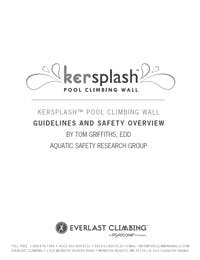 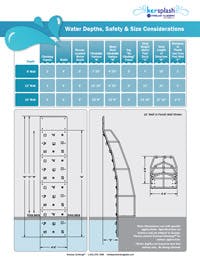 download pdf
Sign Up for AB Today!
Get industry news, insights, and new product information delivered straight to your inbox.
Read Next