Washington U. Bridges Past, Present at Athletics Complex 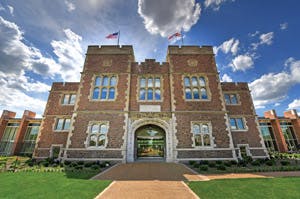 Most recreation facilities built today offer views of activities upon lobby entry. This access control bridge at Washington University's Gary M. Sumers Recreation Center in St. Louis — designed by Bohlin Cywinski Jackson of Philadelphia with local associate Hastings+Chivetta — puts visitors literally on top of the activity. Originating at the iconic Collegiate Gothic entrance of Francis Gymnasium, which was used for the 1904 Olympics, the bridge supplants the typical lobby-and-lounge approach by spanning a subgrade level (that will be filled with fitness equipment following an Oct. 9 presidential debate) as it leads to the newly expanded facility's control desk, turnstiles and four total levels of athletics and recreation space beyond. To emphasize the building site's history, the 16-foot-long bridge is surfaced with hardwood salvaged from the original gymnasium floor. "What's unique is that the bridge allows you visual access as you pass through before allowing physical access," says Hastings+Chivetta senior vice president Steve DeHekker, adding, "This bridge became a link from the historic front door to the new facility — a bridge from the past to the present."

This article originally appeared in the October 2016 issue of Athletic Business with the title "Bridging past and present at Washington U."