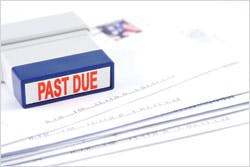 (Photo courtesy of Istockphoto.com)One of the smartest business decisions we've made in recent years was to become more aggressive with our collections procedures for overdue accounts. This hasn't made us particularly popular with, ahem, certain members, but it has helped our cash flow and made us more confident that we are treating all of our members fairly.

For years, we gently followed up on members who were 30, 60 and 90 days (or more) overdue, even using an outside agency to do so, but the real change was when we went to "Level 2" collections. If you've ever been in Level 2 collections for anything, you know that those collectors want their money. Their efforts with regard to our members are never rude or unprofessional, but they are persistent and effective, and our collections efforts are now paying dividends beyond the money we've collected.

Here's just some of what we've learned about this underappreciated aspect of business:

1. Just like with exercise programs, the first 90 days reveal the customer's intentions. Our immediate collections efforts for unpaid dues — Level 1 — are handled by our billing company and are kind and gentle. When a customer's payment cannot be processed, the communications to them begin immediately. Phone calls and letters are frequent, and each one is logged in the member's customer record. Most customers respond quickly and resolve the problem. Those who don't within the first 30 or 45 days are likely headed toward the dreaded Level 2, which commences at 90 days.

2. During the first 90 days, we're the good guys. We used to do our own billing, and that made us the bad guys. We were the ones calling when someone bounced a payment. Now, when we get the calls that say, "Your billing company is chasing me for payment," we get to respond, "Well, let's look into this. How can we help?" We're amazed that so many members don't realize that our billing company works on our behalf and, in a sense, they are us. But, hey, if members think we're the good guys, that works for us.

In fact, during those first 90 days, we can and do help. We will even temporarily remove longstanding members from the list that is going to Level 2 collections so that we can intervene and encourage those members to make arrangements with us. However, some people choose to ignore all communications and pretend there's not a problem, until they start getting letters and phone calls from the collections agency.

3. Letters from collections agencies must arrive with flames coming out of them.Screaming people call so fast when they are placed with Level 2 collections that our heads spin. "I never knew there was a problem," they'll say, to which we respond with the dates and details of every phone call and letter they received during those first, more pleasant, 90 days. Most people respond by confidently declaring, "I never got any of those."

Really? You didn't notice as many as 15 phone calls and letters over three months? But you got one letter from a collections agency, and that you opened and read? Fascinating.

For us, at that point, we really can't help, which we make clear to our (now suspended) member. In Level 2, the debt has been purchased by the collections company, and we do not intervene because it is no longer our money to play with. That lack of control is one of the reasons we work so hard to resolve things in the first 90 days. Another reason is that we get to keep all of the dues that are paid in Level 1. In Level 2, we get only a portion of what the collections agency recovers.

4. Perceived threats are a strong motivator. Unpaid health club obligations can be shared with credit agencies and can therefore negatively impact a consumer's personal credit rating. While that does happen with our members who ignore Level 2 collection efforts for several months, there is plenty of time for these situations to be resolved before anything is reported. Our intention is not to damage their credit score or hold their credit "hostage," as one disgruntled member complained in our first-ever interaction with the Better Business Bureau. We just want to be paid, so if the perceived immediate threat to someone's credit score helps provide motivation, then so be it.

Regarding that fellow who complained: His claim against us was predicated on having no knowledge of our attempts to collect from him during Level 1. He said he had moved and was not getting mail from the U.S. Postal Service, and he claimed we never called him. Our response to the BBB included the exact dates and times that he was called and the dates that letters were sent. Those calls went to the same phone number he gave to the BBB, and the letters went to the same address he was still using.

5. Members in collections are a great source of membership renewals. We never would have guessed it, but our members who enter Level 2 collections have become a rich source of returning members by taking advantage of a creative amnesty program that's offered by our collections agency. In return for the member's small payment to the agency, we waive our re-enrollment fee and the member rejoins with a one-year contract.

This has been a big help to us, because members going to Level 2 collections have been a quiet drain on our membership base. In fact, we have had some months in which we were thrilled with how few people canceled, only to look at our collections report and see that we had, in effect, lost many more people than we thought. People in collections are like financial zombies; their membership is dead, but they never actually quit. We love bringing them back to life.

The amnesty program allows everyone to win. The collections agency gets paid immediately, rather than spending months or years chasing debt. The member gets to clear up his or her financial obligation and return to the gym. And we get a (hopefully) dues-paying member back.

We like being a friendly neighborhood business, and we are as fair and communicative as we can be with those members who are conscientiously paying, or trying to pay, their bills. But on the other hand, we have our own bills to pay and payroll to meet, so we have had to take it up a notch. By doing so in a manner that is consistent with everything else we try to do with our business — communicating, treating people fairly — we've seen nothing but upside.

Take it from us: If you're not aggressively pursuing your overdue accounts, you owe it to yourself to start.