How Gyms Can Use Virtual Reality to Motivate Members 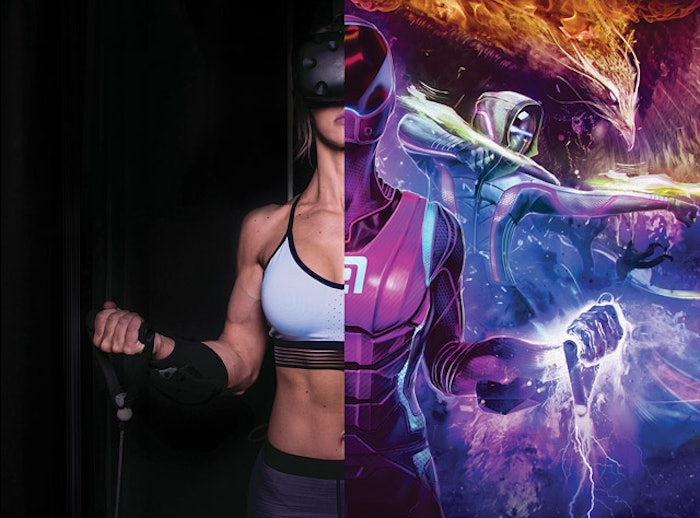 Club members don't renew their memberships when they falter on the initial momentum of a new year's resolution. As daily workouts slowly lose their luster, the gym itself begins to feel like a torture chamber. An owner can ensure the equipment is state-of-the-art, the gym is well kept, the staff is polite, and there are always plenty of clean towels, but when it comes to ensuring that her customers are motivated to return, retention efforts have their limits.

That could change as technology and fitness merge in ways that go beyond Bluetooth-enabled treadmills. Virtual reality might sound like a fringe technology, but a handful of innovative startups are betting that fully immersive fitness experiences unfolding in vast digital worlds will keep people coming back to their real-world gyms.

Full immersion
The modern fitness club is built on manufactured distractions. Most gyms have multiple TVs hung throughout the space, and cardio equipment is strategically placed in front of windows, offering members a view as they toil through their daily 50 or 60 minutes on a fast track to nowhere.

Eric Janszen, CEO and co-founder of VirZoom, maker of a virtual reality fitness platform, thinks exercisers can do better than reading the captions of a cable news broadcast to take their minds off aching legs. "You wouldn't call VirZoom a distraction any more than you would call tennis a distraction. With tennis, you're on the court hitting balls back and forth because that's the game," says Janszen. "In VirZoom, you're in all these worlds and games, and you're actually reacting to them. A half hour goes by, an hour goes by, and you've burned a bunch of calories and gotten a good workout."

VirZoom offers fully immersive video games that users pedal through on a specially equipped stationary bike, while wearing an alien-looking VR headset. Janszen says that the act of pedaling is the ideal modality for moving through virtual worlds. "The problem otherwise is that if you're sitting still in a chair, with a control in one hand, but you're moving 30 miles an hour in the virtual world, you're going to feel sick because your inner ear is going to say, 'Why am I moving in the virtual world, but I'm sitting still in the real world?' "

The real game-changer is the experience itself, and VirZoom has created a number of them. Through the act of pedaling, a user might propel a kayak down a tropical river or ride the back of a flying horse through a mythical landscape. "Imagine a tank battle with your friend in real time," Janszen says. "You can get really wrapped up in it and a half hour, an hour goes by pretty quickly."

Amad Amin, director of digital product management at Life Fitness, is in charge of user experiences for the company's connected cardio equipment. He says good virtual reality content is at a premium and it took a lot of shopping around to see the potential in the technology. "With most of the virtual reality companies we talked to, you were in a virtual environment but there was really no point to the gameplay," Amin says. "You were immersed in this world but there really wasn't an end goal, and after a few minutes it got boring. We didn't think it was going to be anything that an exerciser is going to want to engage with."

But Amin says that Life Fitness took a second look after trialing VirZoom at a conference.

"The way they designed the game is based on high-intensity interval training," Amin says. "You don't even realize it because you're so absorbed in the game, but you're actually going through periods of rapid heartrate, and then you get to slow down and cool off a little bit, and before you know it, you've got a pretty good workout in."

Amin says virtual reality isn't aimed at hard-core fitness buffs but rather the legions of gym goers who approach cardio the same way many approach a bowl of canned spinach. "It's probably the last thing they want to do, and watching those people is pretty interesting," Amin says. "They're on the machines longer. They're excited about it, and they truly forget that they're working out." 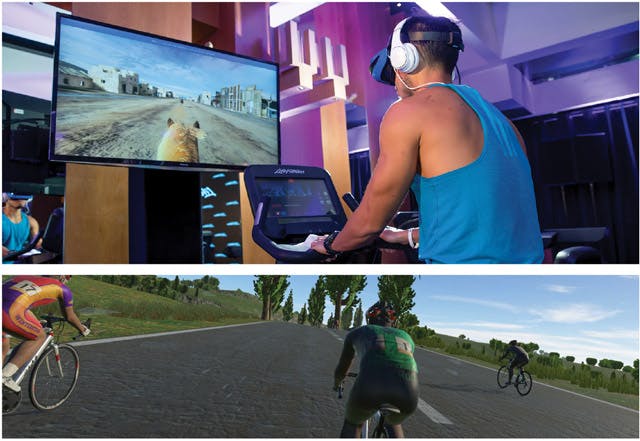 Peddling is the ideal modality for moving through a gaming landscape, whether it puts the exerciser on horseback or on the saddle of a racing bike. [Photos courtesy of Life Fitness and VirZoom]

The body is the controller
Preston Lewis, co-founder of Black Box VR Fitness Experience, also notes lack of motivation as "the biggest problem" for people trying to stick to a workout program.

Black Box, which won Best Startup at 2018's Consumer Electronics Show, takes a different tack, utilizing a high-tech cable machine to merge HIIT training and a resistance program into a single virtual workout. "With this dynamic resistance machine, we've fully automated it, and made sure that the communication of all the weights that it prescribes and all the movements that it does are custom-calibrated to you, based on your goals and your current performance," Lewis explains. "That all runs through a game engine so that we can track every single move that you do in the real world, which then corresponds to something in the game world."

Lewis points to scientific research that shows how an immersive, gamified experience impacts a user's psychology on multiple levels. He contends that virtual reality can actually affect how time and pain are perceived. "It puts you at the center of the game," he says. "Your body is the controller. You could have less perceived pain, and a half-hour workout could feel like 10 or 15 minutes."

Ultimately, Lewis envisions a hybrid of eSports and CrossFit. He posits one scenario in which players compete on the merits of their real-world strength, engaging in virtual "battles" with opposing armies. "You look across the field, and you see your opponent and your opponent starts to send little characters toward you, and you have to defend your base," Lewis explains. "For example, if you select chest press in the game, every time you successfully complete a chest press rep, it will actually fire a meteor at the opposing troops. So, if you're stronger than me, your 70-pounds-per-handle chest press is going to be a Level 5 meteor that does X-amount of damage, whereas if I'm weaker than you, and I can only do a 60-pound-per-handle chest press, every time I do a rep, that's only going to be a Level 3 meteor."

Black Box aims to open a boutique gym in San Francisco within the year where the company can trial the experience. Lewis says the gym will feature more than a dozen individual rooms, each with its own VR equipment, operating on an appointment model similar to the model used by the Massage Envy franchise. From there, he hopes to franchise Black Box gyms and eventually offer drop-in experiences at hotels and other fitness clubs. The final phase will be to bring the experience to the home, where users will be able to continue to develop their personal profiles. "We'd love to have the VR ecosystem available from home, where if you had your own VR setup, you could still access the Black Box ecosystem and rack up points for the high-intensity interval training portion, but then go into the gym to get the full resistance experience." 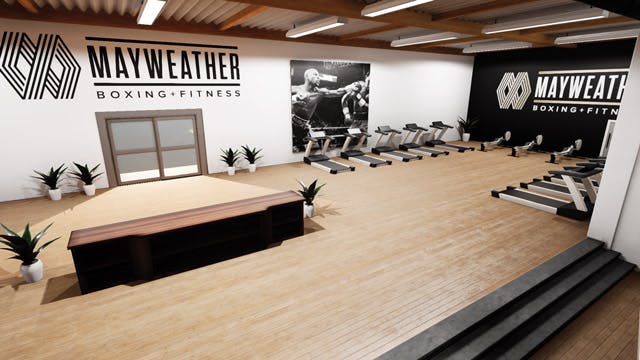 Only limited by imagination
The potential of virtual reality as a fitness tool is almost limitless. While VirZoom and Black Box offer experiences that take place in fantastical worlds, another company is betting that users will be motivated by a well-known world-class athlete.

After making a splash at CES in January, Mayweather Boxing + Fitness recently opened its flagship gym in Los Angeles. The company is built around a gym and fitness infrastructure, part of which is brick-and-mortar gyms and part of which is a virtual reality experience that features instruction from professional boxer Floyd Mayweather.

The idea of your average citizen learning from and being coached by a professional athlete is one that until now has been limited primarily to pricey real-word fantasy camps. Mayweather Boxing + Fitness CEO James Williams says virtual reality is a democratizer. "What we want to do with virtual reality is to take it one step further and reach a wider audience but also enable users to have the experience of not only training with the best modalities and techniques," he says, "but also have the feeling of being trained by the best."

For the time being, the Mayweather virtual experience is reserved for gym members who pay extra to use the system at the gym. The system puts users through a virtual training course with Floyd Mayweather himself, eventually graduating to competition with virtual opponents in the ring. "The virtual ring is a high-energy environment where you get to spar against opponents, utilizing the punch combinations that Floyd has taught you," Williams explains. "But now you have to throw them at the right time and at speed when your opponent drops his guard."

Williams says the real magic happens naturally. "First, the people are incredibly excited and engaged to see how real the virtual environment is and how lifelike Floyd is," he says. "But then people are also surprised and excited by how effective a workout it is. Because it's fun, people initially overlook the fact that it's a real workout." 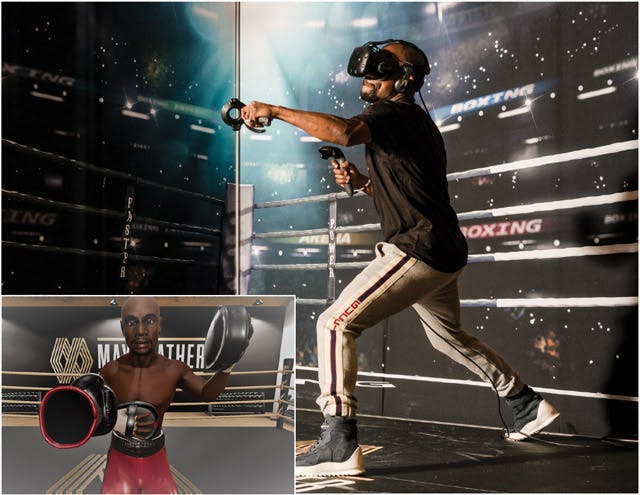 Mayweather Boxing + Fitness members train with a lifelike Floyd before taking his teachings into the virtual sparring ring.

Making fitness fun
As home theater systems and streaming content began to improve, the decline in movie attendance at actual theaters forced theater owners to reimagine their product. It wasn't long until theaters started offering more comfortable seats, deep discounts on tickets and additional food and beverage choices. Is it possible that virtual reality might represent a similar disruption for the fitness industry?

Workouts are supposed to make you sweat and maybe even a little sore, but the technologies being developed by companies like VirZoom and Black Box are poised to reinvent the average workout into something as fun as a video game. That's welcome news, both for those who dread the gym and those who own it.

This article originally appeared in the April 2018 issue of Athletic Business with the title "Is virtual reality poised to disrupt the fitness market?." Athletic Business is a free magazine for professionals in the athletic, fitness and recreation industry. Click here to subscribe.