It has muscled its way into the mainstream and demanded space for battle ropes, plyo boxes, slam walls and suspension rigs. Functional fitness training is a relatively recent trend that’s showing no sign of weakening.

“You know, 10 years ago, 15 years ago, we weren’t even programming functional training spaces in our recreation centers. They didn’t exist,” says Erik Kocher, an architect at Hastings+Chivetta. “You had the classic weight room with selectorized equipment, free weights and cardio equipment. And then usually a stretching space. It’s also a little bit of a crossover to what varsity athletic programs, and particularly football programs, were already doing, which was training with sleds. They were kind of the beginnings of functional training spaces.”

Colleen McKenna, an architect at CannonDesign, says she’s also seen the fitness center evolve dramatically over the past decade or longer, especially in terms of how space is allocated. “You still have the core of it, but there’s just a lot more happening and a lot more diversity in the offerings,” McKenna says. “What used to be basically three zones: you had your heavy lifting; your strength, smaller muscle groups; and then you had cardio. And they were basically 30 percent each, and 10 percent for stretching. And what we’ve seen happen is those three spaces are now 10 spaces. Now there are areas for functional training, which might be indoor turf, might be bodyweight exercises, might be small group training opportunities, could be incline training, it could be personal training with a small area associated with that.”

Here’s a look at some of the latest functional fitness spaces accommodated by state-of-the-art athletics and recreation facilities from across the country. 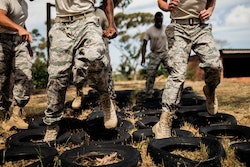 It has muscled its way into the mainstream and demanded space for battle ropes, plyo boxes, slam walls and suspension rigs. Functional fitness training is a relatively recent trend that’s showing no sign of weakening...
November 8, 2022

A community in Georgia has just cut the ribbon on a new fitness center at the police department funded by a grant...
November 7, 2022

From the moment visitors enter Cornell College’s Richard and Norma Small Athletic and Wellness Center, which officially opens later this month in Mount Vernon, Iowa, their eye is drawn from the lobby lounge area...
October 7, 2022

Posttraumatic stress disorder affects one in 30 civilians and up to 10 times as many veterans. This condition can occur when distressing events cause...
October 3, 2022

The new Army Combat Fitness Test (ACFT), which replaced the Army Physical Fitness Test (APFT), was officially implemented on Oct. 1 for all active-duty members. The test will be ordered for all National Guard members as of April 1, 2023, and on...
October 19, 2022

A new study published Monday found that adults who did more muscle-strengthening exercise in a week had a lower risk of death for any reason than adults who did strength training less than those who did not...
October 18, 2022

A gym owner in South Miami, Fla., said he may be forced to shut down after the city has denied the business its license over unpaid fees, but the owner claims...
October 12, 2022
Page 1 of 140
Next Page
Buyer's Guide
Information on more than 3,000 companies, sorted by category. Listings are updated daily.
Learn More
AB Show 2022 in Orlando
AB Show is a solution-focused event for athletics, fitness, recreation and military professionals.
Learn More