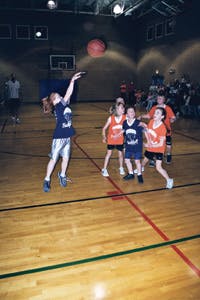 About two years ago, Rick Garrick, assistant director of recreation for the town of Parker, Colo., reluctantly played the role of the Grinch who stole Christmas. Garrick, who oversees Parker's sports programs, was forced to send letters to the parents of 157 children informing them that because of limited facility space, the upcoming winter youth basketball program would have to cap its enrollment at 1,200 participants.

"We didn't have anyplace to put them," says Garrick, himself the father of two young children. "There's no gym space. If I wanted to take my 8-year-old son to go practice, just to go shooting around, I wouldn't have anyplace to go unless I went at six in the morning or at midnight. Out here, we're reliant on the schools to use their gyms. It's up to the individual principals to let you in - and some do and some don't."

Space was particularly scarce in late 2003, when the Parker recreation department lost the use of gymnasiums at a community center and two elementary schools because of construction. In addition, several county-operated elementary school gyms were deemed too small because of a lack of spectator space.

"There was nothing we could do about it but turn away kids who had already signed up," says Garrick. "There are some sad stories I could tell you. Some guys got their kids shoes for Christmas and after Christmas they got the letters saying that they couldn't play. We didn't want to do that ever again."

In the wake of what Parker recreation director Jim Cleveland refers to as an "eye-opening experience," Parker's town council made plans to construct a new recreation facility to accommodate the town's growing sports programs. Since 1994, residents have patronized a 47,000-square-foot recreation center, but a key goal was to avoid duplicating services already available. "Parker, probably like a lot of communities that share our demographics and have a lot of young families, has a pretty strong emphasis on sports," says Cleveland. "While they're great to have, rec centers don't really cater to the sports interests, leagues and tournaments."

But the town's new 90,000-square-foot field house will. Set to break ground this month and open next spring, the facility will feature three main components - a four-court gymnasium, a multipurpose activity court and a synthetic-turf field - designed to accommodate all of Parker's indoor sports needs. Ample space to observe activities as diverse as basketball, soccer and roller hockey will be provided, in part, by an expansive mezzanine-level gallery. "It's basically 90 percent program-driven," says Garrick, who expects the municipal field house concept to catch on in the Denver area and elsewhere. "We went through such a trend of building these monster rec centers that have all these components, which are great. But they're more entertainment-based than program- or need-based. This field house is not something that would be cool to have. We need this building."

That said, Parker's new $11 million field house will be a no-frills facility. Its three main volumes will be clad in inexpensive pre-engineered metal. But while function trumped aesthetics, town officials didn't simply want to erect a big box. To infuse the otherwise nondescript facade with character, the design team added subtle touches such as ridge-top light monitors and a barn-red color that recall Parker's agricultural heritage.

Meanwhile, interior spaces will be lined with durable, low-maintenance materials. "All the surfaces are virtually bulletproof - stained concrete floors with saw-cut patterns, for example - because people are going to hit them with hockey sticks," says Ernest Joyner, a project architect with Denver-based Sink Combs Dethlefs, which designed the field house.

Other cost-cutting measures include omitting shower facilities from the six changing rooms. "It's basically a staging area," says Joyner of the locker area. "Most kids who play in these things shower at home. So you don't have the costs of building the showers and using hot water or the maintenance of constantly having to clean them up and deal with vandalism."

Joyner says that such decisions have helped keep project costs low, to less than $130 a square foot, as compared to anywhere from $160 to $200 a square foot for a typical recreation center. And while the field house will boast several amenities - including a climbing spire and bouldering wall, a cardio/circuit-training loft, a running track and a 1,400-square-foot children's play area - their collective purpose is strictly functional.

"While kids are practicing at rec centers, the moms and dads, brothers and sisters are often bored to tears," says Cleveland. "They're either sitting around trying to read a paper or staying in the car because they don't want to sit in that chaotic environment. That's why we have the climbing wall, the workout facilities and the track. Hopefully, family members will want to go with the kids and use that hour or two while they're there in a way that benefits them, too."

Because no one anticipates the field house becoming a primary recreation and fitness destination for most Parker residents, amenities such as the small cardio loft will not be staffed by personal trainers, as is the case at the town's recreation center. In fact, the Parker recreation department intends to run the entire field house with a skeleton crew. "For the most part, people are going there either for practice or a game," says Garrick.

At the field house, Garrick anticipates employing only his sports programmers and a few maintenance people. "Whereas we would normally staff four or five people at the front desk in a rec center, we'll have one, maybe two at any time," he says. "A lot of times, we'll probably get away with one person in the morning hours." Seniors will likely be the facility's primary users during its first few operating hours of the day, which are expected to be either in the late morning or early afternoon. But the majority of the field house's day will be dedicated to accommodating sports programs. Says Garrick, "Once that bell rings and kids get out of school, it will be a hopping place - probably until midnight or one in the morning for certain leagues."

And with reasonable expectations to maintain such a jam-packed schedule - Parker's population of 40,000 is predicted to grow 5 percent each year through 2010 - town officials believe the field house will deliver a healthy return on their modest investment. "We're hoping to come close to breaking even because sports programs are inherently the biggest cash cows for municipalities," says Cleveland. "Expanding more into recreational and competitive sports should translate into more money coming in and less going out."

Better yet, Cleveland anticipates the field house will relieve Parker's recreation center of current stress resulting from overwhelming crowds at peak hours, restoring its appeal to those residents who might have felt pushed out. "It'll actually allow us to breathe new life back into our existing rec center by focusing again on membership-based activities," he says.

Others, meanwhile, can't stop thinking about the programming opportunities soon to be available at the town's field house. "Once this is open, we'll be able to run developmental camps, expand our adult programs, add women's basketball. The volleyball is just going to be sick," says Garrick, his slang belying his Southern California roots. "Right now, we have three nets strung out in a row. In the field house, we'll have four separate courts. Our participants are going to be extremely excited once they get in there."