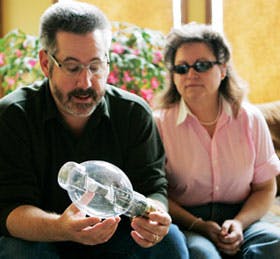 Kellie La Follette rarely leaves her West Linn, Ore., home. Brown parcel paper covers La Follette's 18-foot-high living room windows to shield her eyes from the sun, and beach towels in the kitchen block views of the garden. Still, she must wear sunglasses indoors unless in one of the home's two "dark rooms," so described because they are not illuminated by skylights. She has even resorted to taping her eyes shut and applying a blood serum to ease the pain of her burned corneas. For more than six months, this is how La Follette has lived - all because of five-and-a-half hours spent sitting in an elementary school gymnasium underneath a broken high-intensity metal-halide lamp whose inner quartz tube was still burning.

"Any light, particularly from the sun or fluorescence, is incredibly painful," says La Follette, a 44-year-old elementary school teacher on medical leave since November because of possibly permanent eye damage.

La Follette's saga began in November 2004 during an in-service training session at Lake Oswego's Bryant Elementary School, where a few days earlier, the outer glass surrounding a metal-halide light bulb was shattered by an errant volleyball. All 120 trainees that day were susceptible to harmful ultraviolet radiation released by the bulb - and as many as 80 of them reported symptoms ranging from extreme sunburn, sore eyes and dizziness to headaches and other flu-like characteristics. For most, however, their symptoms were short-lived.

On the other hand, La Follette and four colleagues seated near her still suffer repercussions from that day. All returned to work, but the daily routine proved too dangerous for La Follette. The others still use eyedrops, wear sunglasses, keep lights dim at home and in their classrooms and limit their time outdoors. One woman even developed malignant melanoma on her face that was surgically removed.

As news of the radiation exposure spread throughout Oregon, at least 60 schools around the state reportedly replaced common "R" type metal-halide and mercury-vapor light bulbs, which fail to turn off when broken, with self-extinguishing "T" type bulbs or fluorescent lights. Now, a first-of-its-kind bill working its way through the state Legislature would require all public schools to follow suit in their gymnasiums, natatoriums, covered play areas and administrative offices. Drafted by Sen. Richard Devlin (D-Tualatin), Senate Bill 479 encountered little resistance in the Senate, and House approval was pending as of this writing. If signed into law, schools would be expected to make compliance changes by July 2008 - although the legislation specifies no penalties for failing to do so.

"T" type bulbs cost about $20 more per bulb than "R" type bulbs, says Anna Haley, Devlin's chief of staff. The senator's original legislation was amended to remove stadium and outdoor athletic field lighting, an initial inclusion that riled the National Electrical Manufacturers Association. NEMA says it opposes SB 479 because "T" type bulbs are not available in all sizes, give less light and cost more than regular bulbs. Instead, NEMA recommends turning off any lamp with a broken outer bulb until it is replaced, and the 2005 National Electrical Code states that all bulbs at risk of damage from balls or other objects be fully enclosed by a lens of glass or plastic to protect them from breakage. (NEMA did not respond to AB's requests for comment.)

Although doctors say there is no precedent for the severity of La Follette's injuries, other reports of UV damage caused by broken metal-halide lights have surfaced. Earlier this year, a broken bulb was discovered in a Haywood County, Tenn., middle school gymnasium after 40 children complained of burning eyes and skin rashes. In February 2006, 40 people were reportedly treated for eye irritation and sunburn-like effects caused by a cracked bulb in the gymnasium of Bishop Rosecrans High School in Zanesville, Ohio.

Some of the injured are, like La Follette, fighting for legislative redress. One of her colleagues from the Bryant Elementary incident recently moved to Idaho, where she is in the early stages of helping draft similar legislation. And a man who suffers from constant migraines and wears specially made moisture-infused goggles after spending 10 hours under a broken metal-halide lamp at a Florida trade show may push for a bill in his home state of Colorado.

Back in Oregon, Haley and La Follette hope operators of facilities that would not fall under the state's proposed law - health clubs and municipal recreation centers, among them - will take necessary safety precautions on their own. "The incident occurred in a school, and when we look at legislation, we have to look at passable legislation," Haley says.

"As horrific as this has been for us, we're just determined to make good come out of it," adds La Follette, who created the web site uvlightburns.com to warn of the dangers of "R" type bulbs. "There's a moral obligation to educate people about this, because it's such a senseless injury. I can't go through what I've gone through and not do everything I can to prevent this from happening to other people."