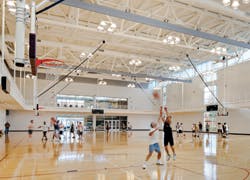 ABOVE BOARDS Basketball goals that drop into position from the ceiling dominate today's gymnasium market.

Ever stop to consider how much movement takes place in a gym? We're not talking about the running, jumping, dribbling and bumping, but rather the shuffling of various pieces of equipment needed to accommodate such activities - sometimes simultaneously. Modern gyms are rigged to convert from basketball to badminton, or from softball practice to a commencement ceremony - always with efficiency, safety and the maintenance of the hardware in mind.

Basketball goals designed to come and go as demand dictates are either suspended from the gym ceiling or wheeled in as freestanding backstops. Ceiling-suspended units are by far the most widely used (one manufacturer estimates they represent 85 percent of the market), with several operational advantages. Touchscreen or keypad control can drop ceiling-suspended goals into place in minutes, and once deployed, they are ready for action. They also allow for abundant run-out space (provided there's no obstruction immediately beyond the court's baseline) and optimal sightlines among spectators in the first rows of end-court seats. Portable goals, like those seen in most competition arenas, are a bit more labor-intensive - at 2,500 to 3,000 pounds, they have to be moved manually into position by two individuals (a process that can take the better part of an hour) and adjusted for appropriate rim height. They also require accommodating door-jamb widths and ample storage, with two collapsed goals consuming roughly the space of a one-car garage. That said, portable goals allow courts to be configured in limitless directions and dimensions. Backstops can even be set up side-by-side for a free-throw contest during basketball practice, if desired.

Volleyball, another gymnasium mainstay, allows for similar conversion options. Ceiling-suspended net systems are becoming increasingly popular within recreation centers as a quick-change alternative to stanchions manually mounted within floor sleeves, though drop-down units have not yet gained widespread rulebook acceptance for competition. Floor-mounted stanchions are available in a variety of materials, from lightweight aluminum to rigid steel, and some are designed to support two nets serving side-by-side courts - a configuration that requires only three floor sleeves. Still, the floors in some gyms are outfitted with more than a dozen sleeves to accommodate multiple matches simultaneously. These same sleeves, combined with special stanchions featuring sliding net collars or rails, can also be used to accommodate indoor tennis, though a volleyball court's width will only allow for the playing of singles tennis.

Where floor sleeves are in short supply, portable stanchions can be wheeled into place. Tip-and-roll models featuring 145-pound cast-iron bases have remained unchanged for decades, but one manufacturer has patented a system in which a foot pedal engages wheels underneath the base. One steerable caster among the three wheels allows a single individual to transport the unit while it remains upright, thus eliminating much of the awkward steering and toe-pinching risk associated with tilting units. 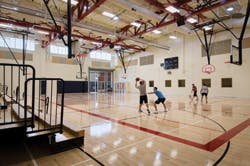 COMPLETE CONTROL Just about anything that moves in the gym setting can be integrated into the same touchscreen control system, including lighting, window shades and telescoping bleachers.

However, volleyball is somewhat unusual in that the hardwood found in most gyms, while applicable to the sport, is not necessarily the preferred surface. Seen particularly at elite levels of competition, snap-together synthetic tile surfaces provide greater resilience and a more forgiving coefficient of friction than hardwood. (Players tend to dive and roll on wood, yet slide on tile.) The tiles also provide the cleaner appearance of a dedicated court uncluttered by game lines of multiple sports. Roughly 6,700 square feet of tile is needed to completely cover a collegiate hardwood basketball court (most high schools still play directly on hardwood), and an experienced team can assemble a modular volleyball court of that size in less than two hours, according to one tile manufacturer. Net heights need to be adjusted to account for the half-inch profile of the tile, as well as the thin rubber layer that often separates the wood and tile surfaces. Tiles can either be cut to accommodate floor sleeves or simply removed, since stanchion padding typically obscures the missing squares completely.

Wrestling is one sport for which there is no surfacing substitute, but going to the mat for this particular gym conversion can be just as easy as most other equipment switches. Wrestling mats stored on racks mounted high on gym walls or from the ceiling can be lowered using the same touchscreen or keypad control that operates everything else found in elevated storage. Some racks now come with the type of safety feature seen on retractable basketball goals - a seatbelt-like catch mechanism that will lock the unit up if for some reason it begins to descend too rapidly. In the case of multiple wrestling mats, the device, which employs a wide strap independent of the actual lift cables, can prevent 10,000 pounds of polyethylene from falling to the floor. With basketball backstops, it can prevent a unit from swinging down and striking open bleachers - or worse, bleacher occupants.

In cases in which multiple activities are occurring simultaneously, gym divider curtains and nets can separate sports participants and protect them from errant objects. Large field houses, common in northern regions where weather can prohibit outdoor practices, often employ netting around the entire interior of a running track, as well as several linear nets within the track oval to break up court space. One manufacturer boasts an installation in Michigan's Upper Peninsula for which 27 separate nets were specified.

Netting designed to serve more specific functions can be lowered from the gym ceiling, as well. Indoor batting cages are common, and indoor throwing cages for shot put and discus practice are available, too. One collapsible unit comes complete with operable gates that allow just enough room for true throws to exit the cage while protecting other gym users from wayward shots and discs. 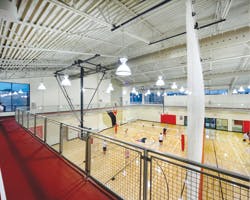 LONG DIVISION Enormous curtains can be lowered to break up court space when separate activities occupy the same gym simultaneously.

On occasion, a gym may be called on to host a non-athletic event. All the aforementioned equipment can more or less retract into the ceiling or up against a wall, or disappear into storage. But the one constant, the court, will have to be protected against everything from table legs to high heels. This is usually accomplished in one of two ways: either with vinyl fabric pulled from rolls and laid (perhaps even taped) in overlapping fashion, or with heavier-duty (and more expensive) rubber-backed carpet tiles laid one by one without any adhesion. The latter has been employed in community gyms that serve as a polling places on election days, according to one distributor.

Arguably, more is asked of today's gyms than ever before. Moving equipment in and out, or up or down, has become standard weekly - if not daily - procedure. And as anyone who has ever operated a gym reiterates, rare is the gymnasium that has too much storage space.

That's one reason, along with conversion convenience, that ceiling-suspended equipment has gained such favor in facilities designed with adequate load-bearing properties in the roof and spatial relationships in the ceiling, where stored equipment must coexist with lighting and air-handling hardware. Touchscreen control of ceiling-suspended equipment, which in some cases has gone wireless, has also evolved to the point where every individual piece can be programmed to go up, down or remain in place before a final single touch sends them all in simultaneous motion, thus offering the ability to change an entire gym configuration in less than three minutes.

The next logical step, then, is preset programming, which would allow for automatic gym conversion to varsity basketball, for example, at 5 p.m. on Fridays. One manufacturer says this upgrade is only months away, but it will come with a familiar caveat. Most systems in place today, including those still employing individual key switches, require continuous contact with the controller while the equipment is in motion. If at any point a button or key is released, the equipment stops instantly - a handy feature when a potential obstacle has been spotted. Without direct visual connection between the equipment and its operator, though, preprogrammed conversions might be deemed too risky by some. This is the primary reason why bleacher manufacturers have been slow to embrace integrated touchscreen operation of their equipment, preferring instead more hands-on (and eyes-on) pendant control when moving telescoping bleachers in and out.

Regardless of what comes next, it's clear that the movement toward making gym conversions ever easier shows no signs of slowing down.