Construction is under way in Virginia Beach, Va., on the Williams Farm Recreation Center. The city enlisted the services of Newport News-based W.M. Jordan Company for the $21 million design-build project, which is expected to be completed in July of next year.

Construction is under way in Virginia Beach, Va., on the Williams Farm Recreation Center. The city enlisted the services of Newport News-based W.M. Jordan Company for the $21 million design-build project, which is expected to be completed in July of next year. The 70,993-square-foot facility will include a multipurpose gymnasium, an indoor pool area with a water playground and a climbing wall, community meeting rooms, classrooms, group fitness rooms and an indoor track overlooking the pool and gym. The project also includes outdoor basketball courts, an outdoor playground and an outdoor sprayground. The facility is a major component in the ongoing development of the 36-acre Williams Farm Park. Phase 2 of the park development is running concurrently with the recreation center construction, and plans call for a 25,000-square-foot in-ground skate park, new restrooms, a concessions building, picnic shelters, and walkway and trail improvements. . .

Construction begins this month on the Hood College Athletic Center, which will feature a 1,600-seat competition arena to replace Gambrill Gymnasium, which was built in 1948. A design-build project led by Frederick, Md.-based Zavos Architecture+Design and Frederick-based Warner Construction, the $10 million, 41,000-square-foot facility will be located adjacent to the college's new synthetic turf field complex. Other amenities will include locker rooms, a training room, athletic department offices and a multilevel fitness center. School officials hope the facility will be open this fall or winter.

Private donations from Nike founder Phil Knight and his wife Penny are bringing a variety of new athletics and recreation facilities to the University of Oregon. In November, the university announced plans to expand the existing Len Casanova Center - which houses a majority of athletic department offices, locker facilities, sports medicine facilities and other support spaces - by 130,000 square feet. The expansion will include a 25,000-square-foot weight room that will open up to a new grass football field and two new synthetic turf practice fields. Plans also call for a new stand-alone, L-shaped, six-story structure that will become the new home for Oregon football. Construction of the facilities is expected to begin this year, and the estimated costs have not been made public. . .

The University of Washington Board of Regents has approved a $250 million renovation to Husky Stadium, to be completed by the start of the 2013 football season. The renovation will involve the complete demolition and reconstruction of the lower seating bowl, the removal of the track to bring seating closer to the field and the construction of a state-of-the-art football operations facility that will boast meeting rooms and coaches' offices. Although overall seating capacity is expected to remain approximately the same, the renovation will add 25 loge boxes and more than 2,500 club seats. . .

In November, voters in Mesa, Ariz., approved Proposition 420, which calls for building an $84 million spring training complex for the Chicago Cubs. As part of the referendum, voters also supported raising the city's hotel tax from 3 percent to 5 percent. . .

The Beaumont, Texas, city council has chosen the site for a new high school stadium. The 5,000-seat facility will provide a venue for football, soccer, track, baseball, softball, wrestling, cheerleading and dance. 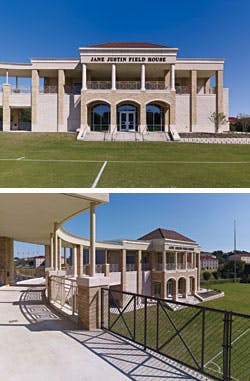 The Texas Christian University women's soccer team recently wrapped up its first season playing at the new Jane Justin Soccer Field House. The $1.6 million, 8,000-square-foot facility includes home and visitors' locker rooms, a lobby, meeting rooms, a sports medicine suite and an elevated walkway that makes room for premium seating as well as event spaces. The Horned Frogs had been operating out of residual space located underneath the bleachers of the existing Garvey-Rosenthal Soccer Stadium, but the new building and elevated walkway now connect to the larger existing athletics campus. . .

The 9,121-seat Auburn Arena opened late last fall, replacing the 41-year-old Beard-Eaves-Memorial Coliseum on the campus of Auburn University. The $92.5 million, 243,792-square-foot facility will be the new home to the Tigers basketball and gymnastics teams. One of the distinguishing features of the arena is 12 court-level luxury suites that open to the outside of the facility and can also be used for entertaining on home football Saturdays. The arena features a combination of chair-back seating and bleacher seating, and two thirds of the seats are less than 27 feet in elevation from courtside. The facility also features two full practice courts, coaches' offices, the athletic ticket office, a team store, a museum focused on Auburn athletics and two food courts. More than 29,000 square feet of space dedicated to student-athletes includes men's and women's locker rooms, lounges, team meeting rooms, and a strength and conditioning center. . . 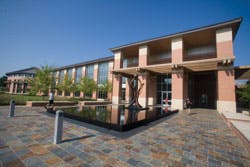