Buried on the corner of campuses around the country are airplane-hangar-like metal buildings or small sheds with a few old lockers and a mess of tangled nets, cones and lacrosse sticks. 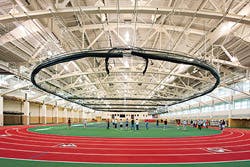 On other campuses, voluminous basketball arenas stand as proud pillars of the university. While dramatically different in appearance, both boast the same description: field house. On most campuses, field houses resemble the former rather than the latter. Although widely acknowledged as necessary by college and university officials, most field houses are uninteresting at best, a resource drain at worst.

But that is changing. New design approaches are creating a new kind of field house: one that is highly functional, hyper-flexible and a dynamic part of its school's culture. Institutions can maximize their investment - both in terms of dollars and space - by considering the many uses such a large space can have. These uses extend beyond the athletic and recreation departments, but to the campus as a whole.

In the face of slashed budgets and increased attention to sustainability, schools today are searching for ways to maximize the square footage of every building on campus. The sheer size of a field house renders it a potential venue for concerts, speakers and debates, commencement, banquets and summer camps.

FIELD HOUSE EVOLUTION
Historically, field houses were used much as they are today: as large indoor practice and competition venues. Hinkle Fieldhouse at Butler University - featured prominently in the 1986 film "Hoosiers" - is one of the oldest field houses in the country and was the largest basketball arena in the U.S. when originally constructed in 1928. There are also athletic cages - such as the Coolidge Cage at Amherst College, built in 1924 - constructed on many campuses in the northeast. These types of structures typically consist of dirt floors for baseball and running purposes. Following WWII, war surplus buildings were made available to colleges, resulting in a few field houses like the Rensselaer Polytechnic Institute Houston Field House, acquired in 1946 and opened in 1949.

Over the decades, the building type evolved in two directions:

In the early 1980s, indoor track and field evolved into a sanctioned NCAA sport at all divisions for both men and women, and it swiftly gained popularity in the U.S. Two-hundred-meter tracks were the standard and, to accommodate growing demand, field houses became the venue of choice for all indoor track and field events. Today, there is also increased demand for football, baseball, softball, soccer, lacrosse, field hockey and tennis - essentially any outdoor sport that requires indoor practice space.

DESIGNING THE MODERN FIELD HOUSE
Creating a hyper-flexible field house takes some careful consideration. There are many variables that all impact how the field house can be used, including:

It is important for each college and university to first consider primary uses and then consider what level of flexibility makes sense, and then move forward accordingly.

When Grinnell College embarked on designing its Charles Benson Bear '39 Recreation and Athletic Center, a primary goal was to create a facility that would host national meets. The rubberized performance surface selected accommodates both tennis and track, and copious storage resulted in a clean space devoid of stacked hurdles and unused nets. "It's a big draw for Grinnell," says Greg Wallace, director of athletics and recreation.

Grinnell hosted the 2012 NCAA Division III Indoor Track and Field National Championships, has bid to host again, and continues to identify potential future uses. The facility is used by the entire campus community, and the nets it incorporated work for both baseball and golf. Wallace is looking at installing either a putting green or a golf simulator to further add to the facility's flexibility.

At Middlebury College, the priority for its new Memorial Field House - currently under construction - was to not only accommodate track and field events, but also to create practice space for the school's many outdoor sports. Administrators selected a rubberized track with infill turf on the infield, which will accommodate everything from track and field competitions and varsity team practices to intramural programs and recreational soccer.

BEYOND SPORTS
The modern field house serves as an asset for schools beyond sports. In 2004, Rhode Island College hosted a presidential candidate in its field house. It was a pivotal learning experience in the needs of a non-sporting event, and the college undertook a renovation project as a result.

Director of athletics and recreation Don Tencher, who oversaw the renovations, identified the building acoustics as one of the most important considerations. "Both the sound quality inside and sound masking for the surrounding neighborhood were important," he says.

The school also needed the ability to cordon off certain parts of the facility from concertgoers and other large groups. A separate events entrance protects valuable fitness center equipment from large crowds. Meanwhile, public restrooms can be separated from the locker rooms by controlled doorways. During the week, the renovated field house still functions primarily as a practice space for student recreation and athletics with new multi-surface flooring. On the weekends, however, it hosts a wide range of programming - from college fairs to concerts to graduation ceremonies. Profits from these auxiliary events go to facility upkeep and asset protection, and the school has made some strategic investments to create value over the long-term; specifically, copious storage and a curtain system to segment the space, as well as bleachers, stairs and even a stage. "We also have a lot more to consider in terms of operations and staffing," says Tencher.

One of the tradeoffs of adding such programming is increased energy use. At square footages surpassing 60,000 feet, the vast roofs of field houses are a prime location for solar panel installations as a means to help offset energy demands - that is, if the structure is designed to accommodate the additional loads.

Kent State recently installed on its field house 1,715 solar panels, which are projected to offset approximately one-third of the power used by both the school's field house and stadium annually. A similar project at the University of Delaware reduced the university's energy costs by 30 percent. Geothermal and natural daylighting are also important considerations. At Grinnell, double-height windows usher in natural light from the east and west, improving the building's appearance inside and outside while allowing the college to use competition lighting levels sparingly.

The less tangible - but no less valuable - benefit of the reimagined field house is the sense of community it can provide. Situated at the center of the school's sports complex, the field house at Grinnell opens at 6 a.m. First, it accommodates the tennis group, which is made up of faculty, staff and community members. Then the walking groups arrive. Later in the day, pickleball and soccer classes take place. In the evening, practice for a variety of varsity, intramural and club sports fill the voluminous space. In the winter, the field house is active from 6 a.m. until 11 p.m. Says Wallace, "The field house is the centerpiece of both our indoor and outdoor facilities."

Is the facility envisioned to be a premier track venue? The indoor tracks that attract the more elite NCAA Division I and Olympic-level events are banked at the ends of the oval. While creating a faster and more desirable track for running events, these raised ends limit the uses that the field house can accommodate with an otherwise flat floor surface. Hydraulic lifts such as those found at Texas A&M and the University of Nebraska provide the best of both worlds, but their initial premium cost is the main reason they are rare in the industry.

Which floor surface is best suited for the primary uses? A truly flexible field house has a floor surface that is durable and firm, but offers some resiliency for the athletes and can be used for many sports. Infill turf, wood sports flooring and synthetic tennis surfaces are some of the more specialized considerations that offer benefits to specific activities but come with some limitations in terms of flexibility.

Will this grand new space be the site for events that draw large crowds? Egress capacity, toilet quantities, support spaces, durability, sound systems and flexible lighting configurations are some of the amenities that can be required and will improve the hosting of such events.

Will the field house be an addition to an existing building? If the existing building's main entrance and restrooms aren't large enough to meet the code requirements for such a large capacity space, new accommodations will be required. This might also be an opportunity to add a security separation and keep patrons out of the rest of the building during special events.

Should the exterior skin be upgraded? Basic metal panelling is the most common and cost-effective material for the roof and walls. Contextually, an alternative approach on some or all of the exterior walls - such as a masonry base, arcade or a more attractive panel system - might reduce the building's massive presence, help it fit in with the surrounding context, or simply dress up its appearance.

Will neighbors be affected by noise or crowds? Additional acoustical isolation might be necessary in the wall construction if the hosting of concerts is expected, and large exterior mechanical units might need sound attenuation or additional enclosures.

Chris Sgarzi is a sports principal with Watertown, Mass.-based Sasaki Associates and leader of its Sports Design Group.